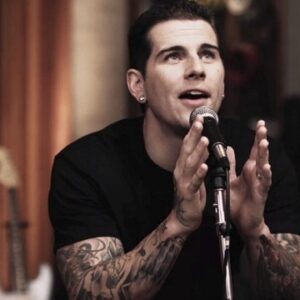 Matt Shadows, better known by his stage name M. Shadows, is a singer, musician, and songwriter from the United States. He is the lead singer of the Avenged Sevenfold band, which he established with his middle school pals. The members of the American heavy metal band try to include a classic metal sound into their songs, as they love the original classic sound pioneered by bands like Metallica and Megadeth. Matt’s singing and performing style is greatly influenced by vintage metal bands, and he was named third on Ultimate Guitar’s list of the Top 25 Greatest Modern Frontmen. His all-time favorite band is Guns N’ Roses. Metallica, Megadeth, Slayer, Iron Maiden, Pantera, Ozzy Osbourne, and others have all affected his style, he freely admits. Avenged Sevenfold has seven studio albums, 24 singles, two compilation albums, and one live album to their credit. They’ve sold over 8 million albums all around the world. On Loudwire’s list of the Top 50 Metal Bands of All Time, the band was ranked No. 47.

Matthew Charles Sanders, better known as M. Shadows, was born on July 31, 1981, in Huntington Beach, California, to Kim and Gary Sanders. Amy, his younger sister, is his only sibling.

He began singing when he was very little, and he began by playing the piano. However, after learning to play the guitar, he developed an interest in metal and rock music.

He attended Huntington Beach High School but was expelled multiple times for his involvement in violent incidents. For a time in high school, he was a member of the punk band ‘Successful Failure.’

He began listening to punk rock bands like Misfits and H2O as a teenager, and when his father gave him Guns N’Roses’ album “Appetite For Destruction,” he was introduced to the metal scene.

The Career of M. Shadows

With its albums, the band experimented with various sounds and continued to have success in the entertainment sector.

In 1999 and 2000, the band made two demos before releasing their debut album. ‘Sounding the Seventh Trumpet,’ the band’s debut album, was recorded when Shadows and the other members were still in high school. On June 10, 2001, it was released.

Shadows wrote the song ‘Streets’ while in the ‘Successful Failure’ band, and it was later included in ‘Avenged Sevenfold’s second studio album, ‘Waking The Fallen,’ which was released on August 26, 2003.

‘The City of Evil,’ their third album and first major-label release, was released on June 7, 2005. Unlike the band’s previous two albums, the album has a conventional heavy metal and hard rock sound. The album notably lacked screaming voices, despite the fact that Shadows had been working with vocal coach Ron Anderson for months prior to its release.

Despite drummer James ‘The Rev’ Sullivan’s death in 2009, the band persevered with new drummer Mike Portnoy and released their fifth album, ‘Nightmare,’ on July 27, 2010, which debuted at No. 1 on the Billboard 200. Shadows have also made multiple cameo appearances on other artists’ albums, including ‘Slash.’

‘Hail to the King,’ the band’s sixth studio album, was released on August 23, 2013. The album debuted at No. 1 on the Billboard 200, as well as in the United Kingdom, Brazil, Finland, Canada, and Ireland.

On October 28, 2016, Avenged Sevenfold released their seventh studio album, ‘The Stage,’ which debuted at No. 4 on the Billboard 200 chart. This album marked the beginning of the band’s transition to a more progressive metal style.

Despite the fact that it was recorded when the members were still teenagers, Matt’s band’s debut album, ‘Sounding the Seventh Trumpet,’ is one of their key masterpieces. It sold 370,000 copies worldwide.

‘Hail to the King,’ the band’s sixth studio album, was also one of his most soulful performances. The album was a critical and commercial triumph, debuting at No. 1 on the Billboard 200 and topping the charts in the United Kingdom, Brazil, Finland, Canada, and Ireland.

On Billboard’s Mainstream Rock chart, the album produced two No. 1 singles: ‘Hail to the King’ and ‘Shepherd of Fire.’ The album was certified Gold by the Recording Industry Association of America (RIAA) on July 16, 2014, after selling over 500,000 copies.

Avenged Sevenfold received the MTV Music Award for Best New Artist in 2006, as well as the Golden God Award for Best International Band. Kerrang! awarded the band’s self-titled album in 2008. Album of the Year is an award given to the best album of the year.

The band was named Rock Band of the Year at the Loudwire Music Awards in 2013.
Matt was named third on Ultimate Guitar’s list of the “Top 25 Greatest Modern Frontmen” in 2017.

M. Shadows married his longtime partner Valary DiBendetto, a model and actress, on October 17, 2009. They’ve been dating since they were in sixth grade. River Sanders, born on July 4, 2012, and Cash Sanders, born on August 15, 2014, are the couple’s two boys.

M. Shadows has a net worth of $20 million USD as the lead vocalist, songwriter, and founding member of the American heavy metal band Avenged Sevenfold.

M. Shadows was born Matthew Charles Sanders on July 31, 1981, in Huntington Beach, California, where he began singing at a young age. As he grew older and began to play the guitar, his passion for rock music expanded.

Matt was said to have lost his capacity to shout after undergoing throat surgery in 2003. He, on the other hand, stated that these rumors are untrue.