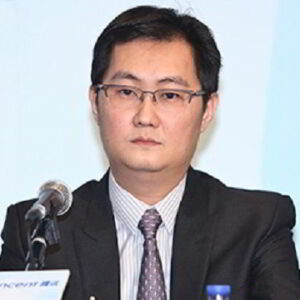 Ma Huateng is a Chinese business magnate, engineer, investor, philanthropist, and entrepreneur who is most known for being one of the founders and CEOs of ‘Tencent,’ one of Asia’s most valuable firms. Tencent is also one of the world’s largest internet and technology firms, as well as the world’s largest gaming and entertainment conglomerate. Ma was born in Dongfang County and reared in Shenzhen, where his father’s business required him to go. He earned a bachelor’s degree in computer science from ‘Shenzhen University’ and worked for a number of telecommunications firms. He founded ‘Tencent’ in 1998 with four of his undergraduate classmates, earning the nickname “Pony Ma.” Tencent established ‘OICQ,’ an instant messaging service, in 1999, and it was the company’s first move toward success. Within a decade, as the internet boomed, ‘Tencent’ flourished and expanded its operations in a variety of areas, including gaming, online payments, e-commerce, media and entertainment, and digital advertising. Ma has been named one of ‘Time’s’ 100 Most Influential People in the World’ three times in recent years. He is currently China’s richest man and the world’s 14th richest man.

Ma Huateng was born on October 29, 1971, in Badagang, Guangdong (now Dongfang City), China, from a poor family. When Huateng was a child, his father, Ma Chenshu, traveled to Shenzhen to work as a port manager. Ma finished his education there and developed a strong interest in computer technology.

In 1989, Ma enrolled at ‘Shenzhen University.’ He earned a bachelor’s degree in computer science in 1993. Ma began working at a telecoms business called ‘China Motion Telecom Development’ after graduating from college (CMTD).
‘CMTD’ was a corporation that provided communication services and goods, and Ma’s job title was software developer for pagers. Ma quit the company later and worked in the R&D section of another internet and telecommunications company for a while since he was making less than $200 per month.

Simultaneously, he toyed with the notion of launching his own firm and contacted four of his undergraduate buddies to help him realize his entrepreneurial goals.

By 1998, Ma Huateng had teamed up with four of his pals to form the firm ‘Tencent,’ with venture investors providing the initial money. Ma remembered attending an event when ‘ICQ,’ the world’s first instant-messaging service, was introduced when he was thinking about launching the first product.

The concept lingered in Ma’s head, and he considered establishing something similar in China. Ma launched ‘OICQ,’ an instant-messaging service, in February 1999. ‘OICQ’ was sued by ‘ICQ’ shortly after it was launched. As a result, it was dubbed ‘QQ.’ However, the company did not prove to be as successful as Ma had hoped. In the first three years, it barely made a profit.

Despite the company’s poor performance (since ‘OICQ’ was given away for free), the product was an instant hit with Chinese consumers. Due to its rapid expansion, the company sought more investors to help cover its operating costs.
‘Tencent’ had already established itself in the Chinese telecommunications industry, but it extended its activities to show profit and avoid takeovers by larger corporations. In 2003, the company’s own portal, ‘QQ.Com,’ was launched. This was seen as ‘Tencent’s official entry into the online gaming industry.

Within a year, ‘Tencent’s popularity skyrocketed. By 2004, it had a 74 percent market share in China, making it the largest instant-messaging service provider. ‘Tencent’ was listed on the Hong Kong stock exchange. The company quickly raised $200 million, making Ma one of China’s wealthiest billionaires.

In 2004, Ma’s smart marketing mind came up with a slew of new ideas for online gaming, including selling virtual items to fund online gaming. It bolstered the corporation’s clout. Around the same time, Ma considered entering the e-commerce industry, which is another rapidly growing and lucrative business.

In 2005, Ma created ‘Paipai.com,’ a direct competitor to ‘Alibaba.com,’ China’s largest e-commerce platform. ‘Tencent’ has grown into a significant influence in the fields of internet gaming, e-commerce, media, entertainment, and instant messaging at that time.

In 2011, ‘Tencent’ made another huge breakthrough when it released ‘Weixin,’ also known as ‘WeChat,’ an instant-messaging service. ‘Tencent’ followed the same path as Bill Gates did with ‘Microsoft’ in developing the app. The company split up into two teams to work on the product at the same time. ‘WeChat’ became the world’s most popular instant-messaging service over time. The majority of its success can be attributed to its user-friendly interface and the presence of both paid and free emoticons and ringtones.

The majority of Ma’s profit came from online video games, which had grown in popularity in the 2010s as internet connection had improved. Tencent Games, a part of Tencent Interactive Entertainment, is responsible for the creation of video games. Tencent Games, which was founded in 2003, had grown to become the world’s largest video-game firm by 2018.

Apart from its own gaming branch, ‘Tencent’ held significant stakes in a number of other gaming companies, including ‘Grinding Gear Games,’ ‘Riot Games,’ ‘Miniclip,’ and ‘Supercell.’

Tencent’s other businesses include Tenpay and Tencent Pictures. The former is a film production firm, while the latter is an online payment method. In 2014, ‘Tencent’ partnered on in-China distribution arrangements with a number of large music-production businesses, including ‘Sony’ and ‘Warner Music Group.’

In 2018, he was named one of the ‘Most Powerful People in the World,’ according to ‘CEOWORLD Magazine.’ He has been compared to Warren Buffett, one of the world’s most successful investors. Ma is the richest man in China and the 14th richest man in the world, with a net worth of $51.1 billion as of March 2018. He was the first Chinese businessman to appear on Forbes’ list of the world’s top 10 richest persons in November 2017.

Ma Huateng has a daughter named Ma Manlin and is married to Wang Dan-ting.
Ma maintains a very basic personal life and dislikes interacting with the media. Ma Huateng has been compared to Chinese businessman Jack Ma, although unlike the extroverted Jack, he is media-shy.
Ma Huateng’s Chinese name translates to “horse” in English, thus his peers call him “Ma Pony.”
Ma is also the founder of a humanitarian foundation that he started on his own. He donated $2 billion to his charity in 2016.

Ma’s internet success has been questioned due to the Chinese government’s strong support for internet restriction. Ma has underlined, however, that he has a positive attitude toward online surveillance, which is critical in terms of data security.

Pony Ma Huateng has a net worth of $48 billion.