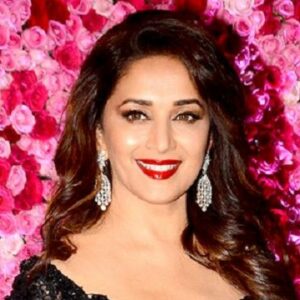 Madhuri Dixit is a well-known Indian actress who has appeared in films such as ‘Beta,’ ‘Saajan,’ and ‘Hum Aapke Hain Koun..!’ She started her acting career in the 1980s and rose to fame thanks to her role in the film ‘Tezaab,’ in which she co-starred with renowned actor Anil Kapoor. She then starred in the film ‘Dil,’ in which she co-starred with Aamir Khan. She was born into a middle-class Mumbai household and began dancing at a young age. She began performing as a child and suffered for a few years because the majority of her early films were flops. She ultimately gained success and rose to prominence in the Indian cinema industry as one of the main actresses. Following her marriage, she took a hiatus from her career before returning to the entertainment scene. She was most recently seen in the film ‘Gulaab Gang,’ which focused about the challenges of women in India. Dixit was nominated for fifteen Filmfare Awards and won eight of them. She was also awarded the Padma Shri, India’s fourth highest civilian honor. She is also well-known for her volunteer activities in the community.

Madhuri Dixit was born on the 15th of May 1967 in Mumbai, India to Shankar and Snehlata Dixit. She has a brother and two sisters. She began taking dancing lessons when she was a small child. She went to Divine Child High School and then Mumbai University to further her education. Despite her initial training as a microbiologist, she eventually decided to pursue a career as a Kathak dancer.

With a role in the film ‘Abodh,’ Madhuri Dixit made her acting debut. Despite the fact that the picture did not go well, she was acclaimed for her performance. Over the next few years, she appeared in a number of other unsuccessful films, including ‘Swati,’ ‘Hifazat,’ ‘Uttar Dakshin,’ and ‘Khatron Ke Khiladi.’

She rose to prominence after starring alongside Anil Kapoor in the 1988 action romantic film ‘Tezaab,’ in which she played the female protagonist. The film received positive reviews and was nominated for several awards. It also garnered Dixit her first ‘Filmfare Award’ nomination in the category of ‘Best Actress.’

Dixit made her acting debut in Subhash Ghai’s film ‘Ram Lakhan’ in 1989. It starred Anil Kapoor, Jackie Shroff, Raakhee, and Amrish Puri, among others. In the same year, she co-starred in the commercially unsuccessful film ‘Prem Pratigya’ with Mithun Chakravorty. Her performance, however, was praised, and she received a second nomination for a Filmfare Award. In the same year, she appeared in two more hit films, ‘Tridev’ and ‘Parinda.’
She received her first Filmfare Award for her role in the film ‘Dil,’ in which she co-starred with Aamir Khan. She portrayed a wealthy and arrogant young lady who eventually leaves her home to marry a lesser young man. The film was a big commercial success and received numerous Filmfare nominations. She also starred in the suspense thriller ‘Sailaab’ and the romance drama ‘Saajan’ in the same year.

She received her second Filmfare Award for her performance in the film ‘Beta,’ in which she co-starred with Anil Kapoor. The movie was based on the Tamil film ‘Enga Chinna Rasa.’ Dixit’s performance was praised by critics. She then starred alongside Sanjay Dutt and Jackie Shroff in the action movie ‘Khalnayak.’ Commercially, the picture was a great hit.

In the psychological thriller ‘Anjaam,’ she made her first appearance alongside Shahrukh Khan. The movie was a financial success. Her next major part was in ‘Hum Aapke Hain Koun…!’, in which she co-starred with Salman Khan. The film was a huge hit, and it went on to become the highest-grossing Bollywood film of all time. It was nominated for four Filmfare Awards and a National Film Award.

In 2002, she starred in ‘Devdas,’ which was at the time the most expensive Bollywood film. The film was a big commercial success and has since gained cult significance. It has gained international acclaim as India’s entry for the Oscars for ‘Best Foreign Language Film’ in 2003. It was also shown at the Cannes Film Festival in 2002. The film received a slew of accolades, including five National Film Awards and eleven Filmfare Awards.

In the 2007 film ‘Aaja Nachle,’ she played a pivotal role. She then played alongside Tamil actor Kamal Hassan in the science fiction catastrophe film ‘Dashavataram.’ The picture was a commercial success, but critical reception was divided.

Despite being relatively dormant since 2008, Dixit made a comeback in 2014 with performances in two films, ‘Dedh Isqiya’ and ‘Gulaab Gang.’ The former was a mediocre commercial success, while the latter was a flop.
‘Bucket List,’ a Marathi drama film, and ‘Total Dhamaal,’ the sequel to the blockbuster comedy film ‘Dhamaal,’ are both planned to release in 2018. In addition to her acting career, she has served as a judge on the dance reality show ‘Jhalak Dikhla Jaa’ for four seasons.

‘Dil,’ a 1990 Indian romantic drama film, is one of Madhuri Dixit’s early works. Indra Kumar directed the film, which also starred Aamir Khan, Anupam Kher, and Saeed Jaffrey. The film was a commercial success, and Dixit received her first Filmfare Award in the category of “Best Actress.” It was also nominated for seven other Filmfare awards. It was eventually remade in a variety of languages.

The psychological thriller film ‘Anjaam’ is another noteworthy work in Madhuri Dixit’s career. Shahrukh Khan, Deepak Tijori, Tinnu Anand, and Kiran Kumar also acted in the film. The film was directed by Rahul Rawaii and told the story of Vijay Agnihotri, a wealthy industrialist who falls in love with a woman named Shivani and gets obsessed with her. Commercially, the film was a success, and Khan and Dixit’s performances were praised.

She portrayed a prostitute in the 2002 romantic drama film ‘Devdas.’ It was the most expensive Bollywood film at the time, and it also became the highest-grossing film of the year, directed by Sanjay Leela Bhansali. The film received a mixed response from critics. It has also developed a cult following over time. It was also selected one of the greatest films of the year by TIME magazine.

In the early 1990s, Madhuri Dixit had an affair with Sanjay Dutt, who was already married. After Dutt was jailed for alleged involvement in terrorist activities, she quit the relationship in 1993.
Shriram Madhav Nene, a doctor, has been her husband since 1999. Arin and Rayaan are the couple’s two children.
‘Dance with Madhuri,’ her own online dance academy, was founded by her.
She is also well-known for her involvement in charity endeavors.