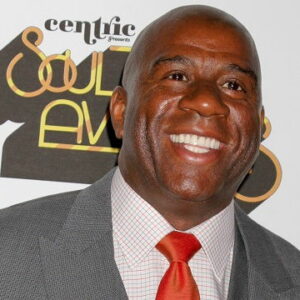 Magic Johnson is a retired professional basketball player from the United States who is widely regarded as one of the greatest basketball players of all time. He played professional basketball for 13 seasons, all with the National Basketball Association’s Los Angeles Lakers (NBA). He is a tall, well-built man known for his muscular arms, agility, and quickness, which helped him become one of the world’s most threatening players throughout the 1980s. Magic Johnson was raised in a large home with many siblings and had an early passion for basketball. His father was an athletic man who had played basketball in high school, despite not being a professional player. His mother, too, fueled his enthusiasm for the sport. He was a fantastic player for the Everett High School squad, earning two All-State honors and was regarded as the best high school player ever to emerge from Michigan at the time. He went on to Michigan State University to study and continue playing the sport. He was drafted by the Los Angeles Lakers after college and spent the rest of his career with them. He was diagnosed with HIV and is well-known for his HIV advocacy and charity work.

On August 14, 1959, Earvin Johnson Jr. was born in Lansing, Michigan. Earvin Sr. worked as a GM assembly worker, while his mother Christine worked as a school custodian. He has a number of siblings.
His father had played high school basketball in his home state of Mississippi, and both of his parents were basketball fans. Earvin showed an early interest in the sport as well.
He attended Everett High School and was a standout basketball player there. He once had a triple-double of 36 points, 18 rebounds, and 16 assists in a game when he was 15 years old, earning him the nickname “Magic.”
He continued to play basketball at Michigan State University after graduating from high school. He dazzled during his collegiate career once again, proving to be a great player.

In 1979, the Los Angeles Lakers selected him first overall. He signed a 25-year, $25-million contract with the Lakers after putting up a good show in the early seasons.
He had a great season in 1981–82, averaging 18.6 points, 9.6 rebounds, 9.5 assists, and a league-high 2.7 steals per game, earning him a spot on the All-NBA Second Team.
During the 1984–85 regular season, Johnson averaged 18.3 points, 12.6 assists, and 6.2 rebounds per game, leading the Lakers to the NBA Finals. In the finals, the Lakers met the Boston Celtics, and Johnson and Abdul-Jabbar guided the team to victory.
In the 1986–87 season, he set a career high with 23.9 points, 12.2 assists, and 6.3 rebounds per game. In the 1987 NBA Finals, the Lakers faced the Celtics again, and Johnson hit the game-winning shot and was named Finals MVP.
His excellent play continued over the next few years, and in the 1988–89 NBA season, he averaged 22.5 points, 12.8 assists, and 7.9 rebounds per game. In 1989, the Lakers reached the NBA Finals for the second time, but Johnson was out due to injury, and his team fell to the Pistons.
In 1991, he was diagnosed with HIV infection, which changed his life forever. He made his diagnosis public and declared his retirement. Despite his retirement, he was selected to play for the United States in the 1992 Summer Olympics. With an 8–0 record, the team dominated the competition and took home the gold title.
He went on to write a book about safe sex and run several enterprises after retiring. However, near the close of the 1993–94 NBA season, his love for basketball compelled him to return to the league as the coach of the Lakers. He had considerable success as a coach at first, and the team did well under him, but the squad went on a ten-game losing skid, and he quit as coach as a result.
During the 1995–96 NBA season, he re-joined the Lakers and made a comeback as a player. In a victory over the Atlanta Hawks in February, he had 15 points, 10 rebounds, and 13 assists. In 32 games this season, he averaged 14.6 points, 6.9 assists, and 5.7 rebounds. Following the season, he announced his retirement for good.

He was voted the Most Outstanding Player in the NCAA Men’s Division I Basketball Tournament in 1979.
Three times he was named Most Valuable Player (1987, 1989, 1990).
In 1992, he received the J. Walter Kennedy Citizenship Award.
In 1996, Johnson was named one of the 50 Greatest Players in NBA History.

In 1981, he had a brief relationship with Melissa Mitchell, who gave birth to a son.
In 1991, he married Earlitha “Cookie” Kelly. A biological son and an adopted daughter are the couple’s children.
He revealed that he was HIV positive in late 1991. To keep his HIV infection from advancing to AIDS, he takes a daily mix of medications.

Magic Johnson has a net worth of $500 million dollars.

He is the founder of the Magic Johnson Foundation, which is dedicated to HIV/AIDS prevention and treatment. He is an ardent HIV campaigner who spoke at the United Nations (UN) World AIDS Day Conference in 1999 as the keynote speaker.