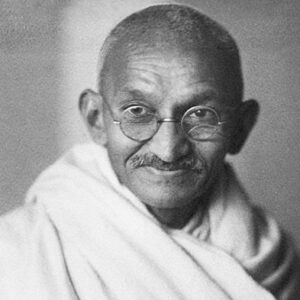 Mohandas Karamchand Gandhi was an Indian lawyer who rose to prominence as the leading figure in the country’s independence movement. Mahatma Gandhi, as he was better known, not only led India to independence from British domination, but also inspired civil rights and liberation movements in several other countries. He is well known for his use of peaceful civil disobedience, including as leading Indians in the Dandi Salt March to protest the British-imposed salt tariff and launching the Quit India Movement, which demanded “an orderly British exit” from India. He was nurtured by parents who emphasized religious tolerance, simplicity, and strong moral principles. He was born into a devout household in British India. He studied law in England as a young man before moving to South Africa to work. He saw a lot of prejudice and bigotry there, which irritated him a lot. He lived in South Africa for more than two decades, during which time he developed a strong sense of social justice and led various social activities. When he returned to India, he got involved in the Indian Independence Movement, eventually leading to the country’s independence from British domination. He was also a social activist who worked to promote women’s rights, religious tolerance, and poverty alleviation.

Mohandas Karamchand Gandhi was born on October 2, 1869, in Porbandar, then part of the Kathiawar Agency in the British Indian Empire, to a Hindu Modh Baniya family. His father, Karamchand Uttamchand Gandhi, served as the state’s diwan (chief minister). Putlibai, his mother, was Karamchand’s fourth wife. Mohandas had three older siblings and two older half-sisters.
His mother was a deeply pious woman who had a significant influence on Mohandas. As he grew older, though, he developed a rebellious tendency and disregarded many of his family’s traditions. He began consuming beer and eating meat, both of which were highly forbidden in his Hindu family.
He was an average student at school, but he did get honors and scholarships on occasion. In 1887, he completed the University of Bombay’s matriculation exams and enrolled at Bhavnagar’s Samaldas College.
In 1888, he was offered a place to study law at London’s Inner Temple. In August, he left Samaldas College and sailed to England. He studied law and jurisprudence there in preparation for a career as a barrister.
While in England, he was attracted back to the principles of his boyhood, which he had abandoned as a teenager. He grew interested in religion after becoming associated with the vegetarian movement and meeting members of the Theosophical Society.
In June 1891, he graduated from law school and was admitted to the bar. After that, he returned to India.

Years of living in South Africa

He struggled professionally for the following two years before accepting a contract in 1893 from Dada Abdulla & Co., an Indian firm, to work in the British Empire’s Colony of Natal, South Africa.
Gandhi’s time in South Africa was a transformative spiritual and political experience for him. There, he witnessed events that he had no prior knowledge of. He, like all other colored people, was subjected to widespread prejudice.
He was once forced to leave first-class on a train despite having a valid ticket merely because of his skin color, and he was also requested to remove his turban. He declined both times.
These acts infuriated him and motivated him to fight for social justice. Despite the fact that his original job contract with Dada Abdulla & Co. was just for a year, he stayed in the nation to fight for the rights of persons of Indian descent. He lived in South Africa for nearly 20 years, during which time he helped create the Natal Indian Congress, which tried to unite the Indian minority in the country.

The Non-Cooperation Movement and the Return to India

While in South Africa, Mohandas Gandhi earned a reputation as a courageous civil rights fighter. A top leader of the Indian National Congress, Gopal Krishna Gokhale, urged Gandhi to return to India and join the rest of the country’s independence fighters.
In 1915, Gandhi returned to India. He became a member of the Indian National Congress in 1920, and by 1920, he had established himself as a powerful force in Indian politics. He was a firm believer in nonviolence and believed that nonviolent civil disobedience was the most effective way to challenge British tyranny.
In the country’s war for independence, he urged all Indians to come together as one, regardless of religion, caste, or creed. He pushed for resistance to British authority, including a boycott of British goods in favor of Indian-made items. He also urged Indians to quit from government jobs and advocated for a boycott of British educational institutions.
The non-cooperation movement grew in popularity across India, causing the British to become enraged. Gandhi was arrested, charged with sedition, and sentenced to two years in prison (1922-24).

The British administration established a new constitutional reform commission in the late 1920s, but it did not include any Indians as members. This enraged Gandhi, who in December 1928 pushed through a resolution at the Calcutta Congress asking that the British government offer India dominion status or face a new non-cooperation movement aimed at achieving complete independence for the country.
As a result of the British failure to reply, the Indian National Congress resolved to announce India’s independence—the Purna Swaraj. At the Indian National Congress’s Lahore session on December 31, 1929, the Indian flag was unfurled, and India’s independence was declared. The Congress urged Indian citizens to engage in civil disobedience until the country was fully independent.
The British Salt Laws were in effect at the time, prohibiting Indians from gathering or selling salt and forcing them to pay a high tax for British salt. In March 1930, Gandhi began the Salt March, a nonviolent protest against the British-imposed salt tax.
To manufacture salt, he marched 388 kilometers (241 miles) from Ahmedabad to Dandi, Gujarat. Thousands of supporters joined him in this symbolic gesture of rebellion against British control. This resulted in his arrest and imprisonment, as well as the arrest and imprisonment of nearly 60,000 of his followers. Following his release, he remained active in the independence cause.

Quit India is a movement that encourages people to leave India. By the time World War II broke out in 1939, the nationalist movement had gained a lot of traction. During the war, Gandhi began the Quit India Movement, a civil disobedience campaign that demanded “an orderly British exit” from India.
On August 8, 1942, he gave a speech founding the campaign, asking for vigorous but passive resistance. Despite widespread support for the movement, he received criticism from both pro- and anti-British political factions. He was chastised for his adamant reluctance to support the United Kingdom in World War II, as some believed it was wrong to refuse to aid the United Kingdom in its fight against Nazi Germany.
Despite the criticism, Mahatma Gandhi remained committed to the principle of nonviolence and urged all Indians to be strong in their quest for ultimate independence. The British arrested Gandhi and the whole Congress Working Committee just hours after his impassioned address. He was imprisoned for two years until being released just before the war ended in May 1944.
The Quit India Movement grew to be the most powerful movement in the history of the Indian freedom struggle, and it is widely credited with gaining India’s independence in 1947.

Partition of India and Indian Independence

The Muslim League passed a resolution calling for the British to divide and leave India, while the Indian National Congress and Gandhi called for the British to leave India. Gandhi was opposed to partition because it went against his vision of religious harmony.
Gandhi proposed that the Congress and the Muslim League work together to achieve independence under a provisional administration and then decide on division later. Gandhi was extremely worried by the prospect of division and worked tirelessly to bring Indians of many religions and cultures together.
On August 16, 1946, the Muslim League called for a Direct Action Day, which resulted in widespread rioting and homicide between Hindus and Muslims in Calcutta. Gandhi, distraught, went to the most riot-prone districts and tried to put an end to the atrocities. Despite his best efforts, the Direct Action Day resulted in the worst communal rioting in British India’s history, sparking a chain of riots across the country.
Following the Partition of India, which resulted in the deaths of over half a million people and the displacement of 14 million Hindus, Sikhs, and Muslims, India and Pakistan were formed on August 15, 1947.

Mohandas Karamchand Gandhi was given the epithet “Mahatma” (meaning “high-souled” or “venerable” in Sanskrit) by Rabindranath Tagore, a prominent Indian polymath.
Gandhi was named Man of the Year by the magazine ‘Time’ in 1930.
Between 1937 and 1948, Gandhi was nominated for the Nobel Peace Medal five times, but he was never granted the prize. After decades, the Nobel Committee publicly expressed regret for the omission.

In May 1883, Mohandas Karamchand Gandhi married Kasturbai Makhanji Kapadia in an arranged marriage. At the time of their marriage, he was 13 years old and Kasturbai was 14 years old. The couple had five children, four of whom lived to adulthood. Harilal, Manilal, Ramdas, and Devdas were his children’s names. Later in life, his wife became a social crusader in her own right.
Gandhi wrote various works, including autobiographies such as ‘The Story of My Experiments with Truth,’ ‘Satyagraha in South Africa,’ and ‘Hind Swaraj or Indian Home Rule.’

On January 30, 1948, he was assassinated at the Birla House (now Gandhi Smriti) in New Delhi by Nathuram Vinayak Godse, a fierce Hindu nationalist activist who fired three bullets into Gandhi’s chest at point-blank range. There had been five failed attempts on his life before to his assassination.