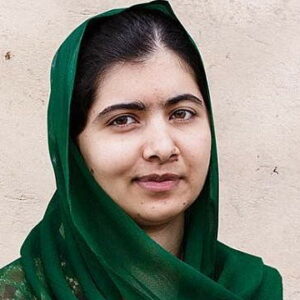 Malala Yousafzai is a Pakistani women’s rights activist who won the Nobel Peace Prize in 2014, making her the youngest person ever to receive the honor. Malala Yousafzai is well recognized for her support for female education in Pakistan’s Swat Valley. Malala, who was born into a family of progressive thinkers and educators, began writing an anonymous blog when she was 11 years old to express her dissatisfaction with the Taliban’s restrictive regulations. Malala, who is mature and knowledgeable for her age, wrote about the Taliban’s attempts to dominate the valley and prohibit females from attending school. Her blog received a lot of attention throughout the world, and she quickly earned a reputation as an up-and-coming activist who advocated for girls’ right to education. She grew more vocal in stating her opinion of women’s rights to education after being encouraged by her father to freely share her thoughts. The Taliban became enraged and issued a death threat against her. When she returned home from school, she was shot by a shooter. The brave young lady survived the heinous attack and returned to activism with even more zeal than before.

Malala Yousafzai was born in Mingora, Swat, Pakistan, on July 12, 1997, to Ziauddin and Toor Pekai Yousafzai. She has a younger brother and a younger sister. Her family owned a school system.
Her father, a passionate advocate for education, taught her Pashto, English, and Urdu. Malala’s father recognized something remarkable in her early on and encouraged her to think and express herself freely.

She began speaking out about educational rights when she was just 11 years old, in 2008. She spoke to a crowd at a local press club in Peshawar, questioning the Taliban’s boldness in denying her the right to an education.
She began writing an anonymous blog for the ‘BBC Urdu’ website under the alias ‘Gul Makai’ at her father’s request. Aamer Ahmed Khan of ‘BBC Urdu’ came up with the notion of a schoolgirl writing about the Taliban’s growing power in Swat.
It was a risky decision for Malala to write about the Taliban, but Ziauddin Yousafzai pushed her to do it. On January 3, 2009, she published her first blog posting. She wrote about how, as a result of the Taliban, fewer females dared to attend school, and how the Taliban had forced the school to close.
Until the school reopened, she continued to write. Following that, Malala and her pals resumed their regular attendance at school. After that, she focused on her schoolwork and terminated the blog in March 2009.
Despite the fact that she authored the blog anonymously, her name was eventually uncovered, and she became a well-known young activist who was frequently asked to give lectures.
She proceeded to acquire fame over the next few years, even winning an award from Pakistan’s prime minister. The Taliban was growing increasingly enraged with this young activist, and she was receiving death threats on a regular basis.
On the 9th of October 2012, she was shot in the head by a Taliban gunman as she was walking home from school. The bullet passed through her head, neck, and shoulder before landing in her shoulder. In addition to her, two of her pals were hurt in the incident.
She survived the attack and was treated right away at a hospital in Peshawar before being flown to Birmingham, England for additional treatment. She eventually healed and returned to her studies at Birmingham’s all-girls ‘Edgbaston High School.’
Her struggle with the Taliban, as well as her amazing survival, prompted a worldwide outpouring of solidarity. She was able to advance her cause thanks to the assistance she received. On her 16th birthday in 2013, she gave a speech before the United Nations, which was declared “Malala Day” by the UN. Her autobiography, “I Am Malala: The Girl Who Stood Up for Education and Was Shot by the Taliban,” was released the same year.
In 2013, she maintained her advocacy with zeal, speaking at ‘Harvard University’ and the ‘Oxford Union.’ She spoke at the ‘Girl Summit’ in London in July 2014, advocating for girls’ rights.
Malala inaugurated a school for Syrian refugees in Lebanon’s Bekaa Valley on her 18th birthday in 2015. ‘Lady Margaret Hall,’ Oxford, is where she is currently studying a bachelor’s degree in philosophy, politics, and economics.

In October 2012, she was awarded the ‘Sitara-e-Shujaat,’ Pakistan’s third-highest civilian bravery award. She received the ‘Mother Teresa Award for Social Justice’ in November 2012.
In 2013, she received the ‘Clinton Global Citizen Award’ from the Clinton Foundation.
In 2013, the European Parliament awarded her the ‘Sakharov Prize for Freedom of Thought.’
She and Indian activist Kailash Satyarthi shared the 2014 Nobel Peace Prize “for their campaign against the oppression of children and young people and for the right of all children to education.”

She was born into a close-knit family that included her parents and two younger brothers. She joked that she is perhaps the only Nobel laureate who still fights with her younger brothers while accepting the ‘Nobel Prize.’

Malala has an estimated net worth of $2 million.

This campaigner is the youngest person to ever receive the Nobel Peace Prize and the only Pakistani to do so.