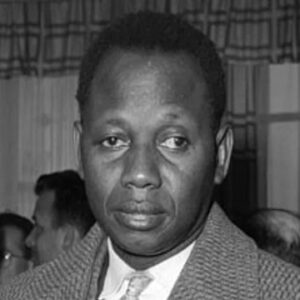 Senegalese politician Mamadou Dia served as Senegal’s first prime minister. He was raised in a Muslim family, went to a Quranic school, and then graduated from the prestigious William Ponty School with a teaching degree. Before entering politics in the early 1940s, he worked as a journalist and teacher. He served in the French National Assembly from 1956 to 1958 and the French Senate from 1948 to 1956. Before becoming Senegal’s prime minister in 1959, he held the positions of vice president and head of the Government Council. The French National Assembly chose him to serve as prime minister with newly elected President Léopold Sédar Senghor. When his radical socialist beliefs conflicted with those of the more moderate president, he frequently found himself at the center of controversy in his capacity as the state’s prime minister. After Senegal became independent, he kept his position, although he was later charged with conspiring against the president. He was consequently removed by the president in a fight for control that Senghor criticized as an attempt at a constitutional coup. He was made to resign and then given a life sentence until being exonerated in 1974. Even though he never again held a position of authority, he continued to be a legendary character who made a huge impact on Senegalese politics.

Mamadou Dia was born on July 18, 1910, to a Toucouleur war veteran and police officer in Khombole, in the Thiès area of western Senegal.
He attended the regional school in Diourbel as well as a Quranic school for his early schooling. In 1924, with the passing of his father, he transferred to St. Louis, an upper primary school.

He enrolled in the William Ponty School in 1927, which at the time was the primary educational institution for members of the elite community in French Africa. Despite being from a low caste, when he graduated from the school and had completed his teacher training, he was regarded as an exceptional individual.

Later on, he worked as the director of the Regional School of Fatick in addition to being a teacher in St. Louis and Fissel. Before relocating to Paris to pursue his studies in economics, he briefly held the position.

Before entering politics, Mamadou Dia frequently penned press pieces about Senegal’s economic plight, particularly the destitution of the peasants for whom he called for the establishment of cooperatives.

After the Vichy Regime was overthrown in 1943, he was inspired to enter politics. He worked with Leopold Sedar Senghor, a rising political star who valued him as a well-connected and capable Muslim despite being a Catholic in a predominantly Islamic nation.

He teamed up with Senghor to build a powerful political party, and he was chosen to serve as its first secretary-general. Throughout the 1950s, which were a time of political unrest in Senegal, he stood by Senghor.
He served as Senegal’s representative in the French senate in Paris from 1948 until 1956. Following crucial territorial elections for self-rule, he later presided over Senegal’s government.

When Senegal gained its independence in 1960, Mamadou Dia was chosen to serve as the nation’s first prime minister alongside Senghor, who was named the nation’s first president.
Up to the federation’s dissolution in September 1960, he also served as vice president of the unsuccessful Mali Federation of Senegal and French Sudan.

The Mali Federation’s dissolution made it clear that power-sharing in fledgling states was problematic, and the administration dealt with this issue throughout the course of the following three years.

Mamadou Dia assumed charge of the economy and started putting some bold ideas into practice, especially when it came to reforming the crucial groundnut sector. Both the French, who were accustomed to Senghor’s nonchalant attitude toward socialism, and some of the influential religious leaders who dominated the groundnut business were upset by his beliefs.

The two erstwhile political partners engaged in a bitter power struggle as a result, and in December 1962, a group of rebellious lawmakers introduced a motion of censure against Dia. In response, he exercised his executive authority and told the army to lock the assembly building so that no votes could be cast.

Senghor referred to it as a coup attempt and specifically mentioned the army, which largely supported the president. Dia and his ministers were then detained, accused of betraying the kingdom, and found guilty; they were then imprisoned for more than ten years.

He was first returned to Dakar following a protracted period of detention in the eastern town of Kédougou, after which he was pardoned and released in the middle of the 1970s.
He founded the People’s Democratic Movement (CDM), a small political organization, in 1981 in an effort to revive his career, but it was ineffective and received little support.

He garnered respect among Senegal’s divided opposition groups later in life because he continued to publish his rants in the local press until he was very old.

One of the wealthiest and most well-liked politicians is Mamadou. Mamadou Dia’s net worth is $5 Million, per our analysis of data from sources like Wikipedia, Forbes, and Business Insider.