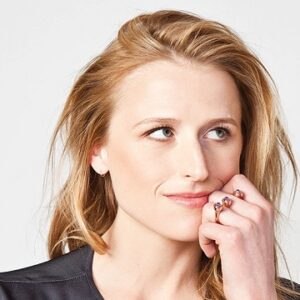 Willa Mary “Mamie” Gummer is an accomplished American actress who has built a name for herself in television, cinema, and theater. She’s also the eldest daughter of Meryl Streep, the legendary Academy Award-winning American actress and a generation’s heartthrob. Gummer initially appeared on screen as a young artist in ‘Heartburn,’ one of her mother’s films. She followed in her mother’s footsteps into the field of acting once she reached adulthood. She appeared in films such as ‘The Hoax,’ ‘Evening,’ ‘Ricki and the Flash,’ ‘Cake,’ and ‘Side Effects’ over the years. She has also appeared in films such as ‘The Laramie Project,’ ‘The Autumn Garden,’ and ‘Uncle Vanya.’ She received multiple nominations for her outstanding stage performances, including the ‘Theatre World Award’ for ‘Mr. Marmalade.’ In the American legal and political drama ‘The Good Wife,’ she played Nancy Crozier, and in the American medical drama ‘Emily Owens, M.D.,’ she played the title role of ‘Emily Owens.’ ‘John Adams,’ ‘Off The Map,’ ‘The Big C,’ and ‘Manhattan’ are some of the other notable TV shows in which she appears.

Grace Gummer, who followed her mother and older sister into acting, and Loiisa Gummer, a model, are her two younger sisters. Henry Wolfe Gummer is a guitarist.

She was raised in Salisbury, Connecticut, and attended Farmington, Connecticut’s ‘Miss Porter’s School.’ She then went on to the ‘Kent School’ in Kent, Connecticut, where she received her diploma.

She and her siblings spent five years in Los Angeles. She earned her bachelor’s degree in theatre and communications from Northwestern University in 2005.

Her first film role was as Annie Forman in the 1986 American blockbuster comedy-drama ‘Heartburn,’ in which she co-starred with her mother and Jack Nicholson. To avoid public attention, she was given the name Natalie Stern. The ‘New York Times’ gave her a good review.

She appeared in three Northwestern University Theater productions while there, including ‘The Laramie Project’ (2003), ’12 Volt Heart’ (2004), and ‘The House of Blue Leaves’ (2004). In the 2003 short film ‘Reservations,’ she played the character of a ‘Hostess.’

Following college, she had her off-Broadway debut in Noah Haidle’s ‘Mr. Marmalade,’ in which she played Lucy. Michael C. Hall as the title character in the film.

In 2006, she won the ‘Theatre World Award’ for Best Supporting Actress for her role in ‘Mr. Marmalade,’ which she performed at the ‘Laura Pels Theatre’ in New York City from 2005 to 2006. She appeared in two films that year, ‘Hoax’ and ‘The Devil Wears Prada,’ though her role in the latter was eventually cut.

Her performance as Erica in ‘The Water’s Edge,’ which premiered at the ‘Second Stage Theatre’ in New York City in 2006, earned her a nomination for the ‘Lucille Lortel Award’ in 2007.

Gummer played a younger version of Lila Wittenborn in the Lajos Koltai directed 2007 American drama film ‘Evening,’ while her mother played the older version. She also appeared in the short film ‘All Saints Day’ that year.
She played Sophie Tuckerman in the Williamstown Theatre Festival’s 2007 theatrical production of Lillian Hellman’s play ‘The Autumn Garden.’ She also appeared in Playwrights Horizons Mainstage Theatre’s production of ‘Desdemona: A Play about a Handkerchief’ that year.

She made a name for herself in both film and theater before moving on to television. In 2008, she played Sally Smith Adams in three episodes of the HBO TV miniseries ‘John Adams,’ which won Golden Globes and Emmys. The series followed the political career of actor Paul Giamatti’s character, US President John Adams.

In 2008, she made her Broadway debut in the Tony Award-nominated revival of ‘Les liaisons dangereuses,’ presented by the ‘Roundabout Theatre Company,’ which opened on May 1 at the ‘American Airlines Theatre.’ She portrayed Cécile de Volanges in the film, which also starred Laura Linney and Ben Daniels.

She played Bess in the play ‘Hunting and Gathering’ at the Primary Stages in New York City in 2008, as well as Jeanie Burgess in the war drama ‘Stop-Loss’ and Julie Corleone in the independent film ‘The Loss of a Teardrop Diamond.’

She starred as Tisha in the comedy-drama film ‘Taking Woodstock’ and as Ruth in the romantic comedy film ‘The Lightkeepers’ in 2009. She also starred as Sonya in the play ‘Uncle Vanya’ at the Classic Stage Company in New York City that year.

Her outstanding performance in “Uncle Vanya” got her a nomination for the “Lucille Lortel Award” for “Outstanding Featured Actress.”

On February 2, 2010, she had a cameo appearance as Nancy Crozier in the 13th episode of the first season of the American legal and political drama ‘The Good Wife,’ titled ‘Bad.’ In the second season of the show, her character appeared in two episodes: ‘Cleaning House’ and ‘Getting Off.’

She played Emily in the American psychological horror film ‘The Ward,’ which was released in 2010. She went on to appear in films such as ‘The Lifeguard,’ ‘Side Effects,’ ‘Cake,’ and ‘The End of the Tour,’ among others (2015).

She remained one of the main cast members in the ABC medical drama series ‘Off the Map,’ where she played Dr. Mina Minard, from January 12, 2011 to April 6, 2011. She starred alongside Alison Fraser and Hamish Linklater in the Off-Broadway production of ‘The School For Lies’ in April 2011.

She was nominated for a ‘Drama Desk Award’ for ‘Outstanding Actress in a Play’ for playing Jess in the play ‘Ugly Lies the Bone’ at the Roundabout Theatre in New York City from October to December 2015.

After being cast in the Broadway production of ‘Les Liasions Dangereuses’ in 2008, she met actor Benjamin Walker. After dating for a while, the two became engaged in October 2009. In July 2011, they married at Gummer’s parents’ home in Connecticut.

The pair remained in Brooklyn, New York City’s Park Slope neighborhood. In March 2013, it was revealed that the couple had mutually separated and were going to divorce.

She is involved with a number of organizations, including the Nomi Network and the Women’s Refugee Commission.
Her net worth is believed to be around $15 million as of May 2017.

Mamie Gummer is an American actress who is worth $10 million. Mamie Gummer’s net worth stems from her great playing career, which began when she was three years old in the 1986 film Heartburn. Her mother is actress Meryl Streep, and her father is sculptor Don Gummer. She was born on August 3, 1983.