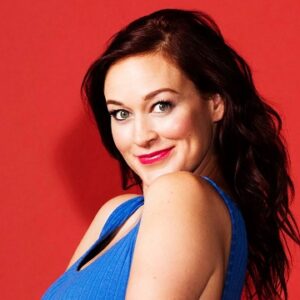 Mamrie Lillian Hart is an American stand-up comedian, writer, and performer who rose to prominence thanks to her YouTube channel. She began her main channel, ‘You Deserve a Drink,’ in 2011, after joining YouTube in 2009. She gained the hearts of tens of thousands of people through this medium. She has also starred in a number of films and videos that have been commercially successful. Her works in a variety of genres are quite popular with her audience. She was influenced by her father, David Hart, a well-known American actor and singer, from an early age. She got her start in show business by joining the comic group ‘Cudzoo and the Faggettes.’ Later on, she grew in popularity thanks to her YouTube channel, ‘You Deserve a Drink,’ which featured instructional mixology videos. Mamrie has also been in a number of ads on television. She appeared in an episode of the TV show ‘Don’t Trust the B—— in Apartment 23’ as a guest star. She is also an accomplished writer. In 2015, she published ‘You Deserve a Drink: Boozy Misadventures and Tales of Debauchery.’

The Career of Mamrie

Mamrie Hart worked with ‘Cudzoo and the Faggettes,’ a band recognized for its funny lyrical content, before becoming famous on YouTube. The band described their own style as a blend of dirty doo-wop and vintage rock when they performed in New York.

She joined YouTube in 2009, but it wasn’t until 2011 that she started her main channel, ‘You Deserve a Drink,’ where she broadcasts instructional mixology videos.

Her previous experience as a bartender came in handy. She occasionally makes cocktails for celebs in her videos who she believes deserve one.

Following the completion of the drink, viewers are urged to make the cocktail themselves and re-watch the film. They want to use it as a drinking game as well, with each participant taking a drink after she creates a joke.

Grace Helbig, Tyler Oakley, Hannah Hart, and Flula Borg are among the YouTube stars with whom she has cooperated. In 2013, she introduced her audience to her other YouTube channel, ‘Mametown.’

Despite the fact that the channel was launched in 2009, it had no videos before then, and fans were asked to tell her what kind of content they wanted from her on this channel. The channel has about 400k subscribers as of June 2017, whereas her main channel has over 1.2 million members.

Mamrie Hart has also written and performed skits with the sketch comedy troupe ‘The Upright Citizens Brigade.’ She has starred in various TV ads over her career, including one for the American furniture firm ‘La-Z-Boy.’

She co-starred in the comedic drama ‘Camp Takota’ alongside YouTubers Grace Hellbig and Hannah Hart in 2014. The film was hailed for being funny and enjoyable, but it was also panned for being too predictable.

She has had five appearances on the ‘Comedy Central Quiz Show’ and appeared in the comedy web series ‘Oscars’ Hotel for Fantastical Creatures.’

Mamrie Hart was born in the United States on September 22, 1983, in Dover, New Jersey. David Hart, her father, is an actor, and Anne Tabor, her mother, is a high school teacher.

When she was nine years old, her parents split. David and Annie are her two siblings.

Hart obtained a bachelor’s degree in theater from the University of North Carolina at Chapel Hill. She is said to be single and only concerned with her career.

As of 2022, she is said to have a net worth of $4 million, which she has accumulated from her career as a social media star, actor, and comedian.