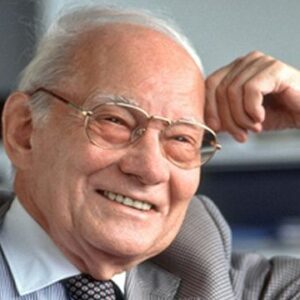 Manfred Eigen is a biophysical chemist from Germany who was awarded the 1967 Nobel Prize in Chemistry for his work on the kinetics of extremely rapid chemical reactions. He is a pioneer in the field of kinetic reactions and shared the Nobel Prize with R.G.W. Norrish and George Porter at the tender age of 40. Eigen was able to study a wide variety of fast chemical reactions during his lengthy and varied research career. He also concentrated his efforts on a plethora of unanswerable questions. He devised a number of methods for studying the nature of rapid chemical reactions. They are commonly referred to as’relaxation techniques.’ His research interests extend beyond chemical reactions to include evolution. He has advanced and demonstrated a number of visionary ideas on the subject.

Manfred Eigen was born in Bochum, Germany on 9 May 1927 to Ernst Eigen and Hedwig, nee Feld. His father was a musician who specialized in chamber music.
He attended Bochum Humanistic Gymnasium.

Eigen was drafted into the German army at the age of 15 and assigned to an anti-aircraft unit. At the end of the Second World War, the Russians captured him. He escaped captivity in autumn 1945 and enrolled at the University of Gottingen, where he studied physics and chemistry alongside a group of other post-war students.

In 1951, he earned a doctorate in natural sciences under the supervision of Arnold Euken. His doctoral dissertation investigated the specific heats of heavy water and aqueous electrolyte solutions.

Eigen worked as an Assistant Lecturer at the University of Gottingen’s Institute of Physical Chemistry from 1951 to 1953. He began his research on fast ionic reactions at this time, which were detected using ultrasonic absorption measurements. He collaborated on his research with two other colleagues, Konrad Tamm and Walter Kurtze. The trio published their research on sound absorption by various salt solutions in 1953. This is how they proposed that sound absorption could be used to determine the speed of fast reactions.

In 1953, he joined the Gottingen-based Max Planck Institute of Biophysical Chemistry.

In the years that followed, Eigen developed several techniques for recording time at sub-nanosecond resolution. Leo de Maeyer joined Eigen’s laboratory in 1954 and assisted him in developing several research techniques. Her research focused on proton reactions, and she was instrumental in determining the speed of neutralization. Additionally, they discovered the protons’ anomalous conduction properties in ice crystals. Eigen and De Maeyer continue to work closely together at the Max Planck Institute in Gottingen.

Throughout the 1960s, his primary research focused on the physical chemistry of organic compounds. His keen interest in the study of reactions enabled him to identify the intermediate stages in a series of chemical reactions and demonstrate them experimentally for an acid base catalysis reaction.

He became the Max Planck Institute’s director in 1964 and served as its managing director from 1967 to 1970.

He is also an elected member of the Federal Republic of Germany’s Council of Scientists.

He is currently the Max Planck Institute’s Director Emeritus.

Each year, he travels to Boston with his friend and colleague Leo De Maeyer to hold discussions with American neurologists, biochemists, and biophysicists about topics of mutual interest.

He is still researching numerous unanswered questions in biochemistry.

In 1967, he was awarded the prestigious Nobel Prize in Chemistry for his work on the ‘Kinetics of extremely fast chemical reactions using relaxation methods’.

He has published over a hundred articles on the thermodynamic properties of water and aqueous solutions, electrolyte theory, thermal conductivity, and sound absorption of fast chemical reactions.

Elfriede, nee Muller, is his wife. Gerald and Angela are their two children.

He is a self-taught musician who enjoys playing guitar in his spare time.

He adores mountaineering, which is his preferred vacation sport.

The estimated net worth of Manfred Eigen is unknown.