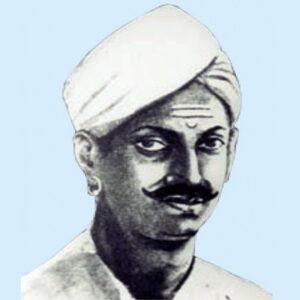 Mangal Pandey was an Indian soldier who was instrumental in instigating the 1857 Indian rebellion. As a sepoy with the British East India Company, he objected to the soldiers being issued greased cartridges; the cartridges were rumored to have been greased with cow or pig lard. As a devout Hindu Brahmin, biting off the ends of greased cartridges was against his religious beliefs if they had indeed been lubricated with animal fat. Soon after, the soldiers began to believe that the British had used pig or cow fat on purpose, and Mangal Pandey incited the other soldiers to join him in protesting the British. On 29 March 1857, he paced in front of the regiment’s guard room near the parade ground, pleading with his fellow Indian soldiers to revolt. Armed with a musket, he attacked and seriously injured two Europeans. While some of his fellow soldiers joined him in the rebellion, another sepoy, Shaikh Paltu, restrained Pandey to demonstrate his allegiance to the British. Pandey attempted suicide in order to evade arrest but was unsuccessful. He was apprehended and executed shortly afterwards. His assassination precipitated a series of mutinies among Indian soldiers throughout the country, culminating in what became known as the Indian rebellion of 1857.

Mangal Pandey was born in Nagwa, Ballia, Uttar Pradesh on 19 July 1827 into a Bhumihar Brahmin family. Divakar Pandey, his father, was a peasant. Mangal Pandey had a sister who perished in the 1830 famine. Pandey developed into an aspirational young man.

Mangal Pandey, a 22-year-old young man, joined the British East India Company’s army in 1849. According to some accounts, his recruitment occurred by chance—he was approached by a brigade marching past him while on a visit to Akbarpur.

He was assigned to the 6th Company of the 34th Bengal Native Infantry as a soldier (sepoy). He was initially ecstatic about his military career, which he viewed as a stepping stone to future professional success. Additionally, his regiment included several other Brahmin young men.

He, on the other hand, began to lose interest in military life as the years passed. In the mid-1850s, while stationed at the garrison in Barrackpore, an incident would alter the course of his life and have a significant impact on the Indian independence movement.

In India, a new Enfield rifle was introduced, and the cartridge was rumored to be greased with animal fat from pigs and cows. To load the rifle, soldiers would have to bite off the ends of greased cartridges.

Because the cow is a sacred animal to Hindus and the pig is despised by Muslims, the Indian soldiers considered the use of fats from these animals to be controversial. The Indian troops believed it was an intentional act by the British to defile their religions.

Mangal Pandey, a devout Hindu Brahmin, was incensed by the cartridges’ alleged lard content. He chose to act violently against the British in order to convey his disapproval.

Mangal Pandey, armed with a loaded musket, paced in front of the regiment’s guard room near the parade ground on 29 March 1857, inciting the other Indian soldiers to rise up against the British. He was accompanied by several other men. The Indian soldier intended to assassinate the first European who caught his eye.

Lieutenant Baugh, Adjutant of the 34th Bengal Native Infantry (BNI), learned of the rebellion and galloped to disperse the insurgents. Pandey took position as he approached, aimed at Baugh, and fired. Although the bullet missed the British officer, it struck his horse, knocking them both down.

Baugh sized a pistol and fired at Pandey in a split second. He erred. Pandey then attacked him with a talwar—a large Indian sword—injuring and knocking the European officer to the ground. Another Indian sepoy, Shaikh Paltu, intervened at this critical point and attempted to restrain Pandey.

By this time, word had spread to the remaining British officers, and Sergeant-Major Hewson had arrived on the scene. He directed Jemadar Ishwari Prasad, the Indian officer commanding the quarter-guard, to arrest Mangal Pandey, but Prasad declined.

Hewson then rushed to Baugh’s aid and was knocked to the ground from behind by a musket shot from Pandey.

Shaikh Paltu, meanwhile, attempted to defend the two Englishmen. Numerous other sepoys stood silently watching the fight, while a few advanced and struck the English officers.

Additional English officers were dispatched to the scene. Mangal Pandey attempted suicide after realizing his arrest was inevitable. He shot himself in the chest and collapsed, but did not die. He was apprehended and prosecuted.

Mangal Pandey is best remembered for his revolt against British officers on 29 March 1857, when he incited his fellow soldiers to join him in an anti-European rebellion. He inflicted serious injuries on two English officers before being apprehended and sentenced to death. This incident is believed to have incited Indian soldiers throughout the country, resulting in a series of revolts in the following weeks.

He was tried and sentenced to death following his arrest. According to some reports, Mangal Pandey was under the influence of drugs—possibly cannabis or opium—during the revolt and was unaware of his actions.

His hanging was scheduled for 18 April 1857. However, the British authorities feared a larger revolt if they waited this long and hanged him on 8 April 1857.

Mangal Pandey’s actions against the British sparked a series of revolts throughout India, culminating in the outbreak of the 1857 Indian rebellion.

In India, he is regarded as a freedom fighter, and the Indian government commemorated him with a postage stamp in 1984.

Numerous films and stage productions have been based on his life, including the 2005 Hindi film ‘Mangal Pandey: The Rising’ and the stage play ‘The Roti Rebellion.’

The net worth of Panday is $180million.