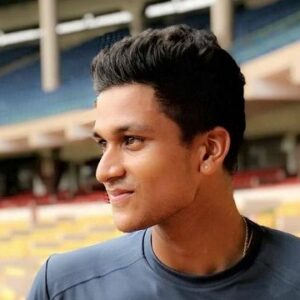 Manjot Kalra is a professional cricketer from India who participated in the 2018 ICC Under-19 Cricket World Cup for the Indian under-19 side. Manjot contributed a crucial hit in the tournament’s decisive game, which enabled India to win the Under-19 World Cup for a record-tying fourth time. Manjot was chosen by the “Delhi Daredevils” at the 2018 IPL auction because of his consistently strong performance during the world cup. The “Delhi Daredevils” paid the left-handed hitter Rs 20 lakh (base price). Previously, Manjot Kalra led the Delhi cricket team’s under-14 squad. The only player from Delhi to be chosen for the under-19 Indian team was Manjot, who had previously played for the under-16 team. He was taught by Indian batting star Rahul Dravid after being named to the under-19 team.

Delhi welcomed Manjot Kalra into the world on January 15, 1999. His parents, Naveen Kumar and Ranjit Kaur raised him. Hitesh Kalra, Manjot’s older brother, had a significant influence on the development of his younger brother’s cricketing career. In Delhi, Manjot attended Lancer’s Convent School before enrolling at Bal Bharati Public School. Manjot excelled in school but never showed any interest in sports.

It was only because of his brother Hitesh that he began playing cricket. Manjot would go to the cricket ground with his brother before beginning to participate. Manjot was chosen for the under-14 Delhi cricket squad due to his success in a few local competitions.

Manjot began to perform well for the under-14 squad, and as a result, he was appointed team captain. Manjot was the captain of the team and had scored a century, but he was still undecided about turning cricket into a vocation and he continued to prioritize his education.

After being chosen for the under-16 team, he started contributing well to his team once more. Around this time, Manjot began to take cricket seriously and began considering making a career out of his cricketing abilities.
Manjot had to decide between playing cricket and going to college after he graduated high school.

He decided on cricket because he was playing at the top of his game for the Delhi under-16 team. Additionally, he began working out with renowned Delhi coach Sanjay Bhardwaj before being chosen to play for the Indian under-19 team.

Manjot was unable to kick off his under-19 season as he had originally intended. His squad fell to Nepal in a game that was a part of the “Asia Cup” in November 2017. Manjot too had a poor individual performance, scoring 35 runs off 69 balls with a meager strike rate of little over 50.

Despite being aware that his father was having heart surgery at home in India, Manjot decided to play in Malaysia. Manjot had a dismal “Asia Cup” performance, but he exploded for 172 runs in the “Cooch Behar Trophy” for under-19 players.

His 172-run innings and a few other game-winning hits ensured his selection to the under-19 world cup team. Manjot traveled to New Zealand, the location of the world cup, and began competing in the renowned competition.
Despite scoring an outstanding 86 against Australia in the world cup’s first game, he struggled in the following three contests. Manjot has left off the team for the league game against Papua New Guinea after three straight losses.

Manjot participated in the crucial semifinal game and scored 47 significant runs. Manjot was given attention by numerous magazines after his valiant innings of 47 against Pakistan in the semi-final.
His match-winning 101 not out against Australia in the championship game helped him earn more popularity. Many people praised Manjot for the way he eliminated his opponent from the game. ‘Delhi Daredevils’ also selected him during the IPL auction, which took place in January 2018.

Manjot was required to submit to various age-verification tests by the “Delhi and District Cricket Association” (DDCA) and “The Board of Control for Cricket in India” (BCCI), who intervened. Following the examinations, it was determined that Manjot was actually born on January 15, 1999. His life would be changed forever with the news that he could represent India in the under-19 world cup.

Manjot gets along well with his parents. His parents helped and advised him when his career was beset by difficulties. Shiva Singh’s teammate for the under-19 division, Manjot, is a close friend.

Even though Manjot is from Delhi, “Royal Challengers Bangalore” is his favorite IPL team. Unsurprisingly, Virat Kohli is his favorite cricketer, and he views him as an inspiration. Manjot is a devout follower of Kohli and aspires to be like him in the near future.

Manjot Kalra is one of the wealthiest and most well-known cricket players. Manjot Kalra has a net worth of $5 million based on our analysis of data from sources including Wikipedia, Forbes, and Business Insider.