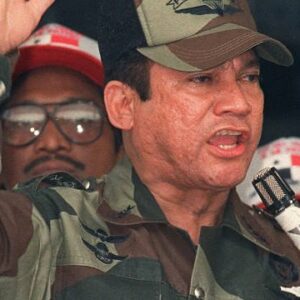 Manuel Noriega was a Panamanian politician and military officer. He was the military ruler of Panama from 1983 to 1989, when he was deposed following the invasion of Panama. The American forces drove him out of power. Manuel had worked closely with the Central Intelligence Agency of the United States for more than three decades prior to the US invasion, and he was one of the CIA’s most valued intelligence sources throughout Central and South America. He was, in reality, one of the key conduits for illicit weapons, military equipment, and cash to US-backed counterinsurgency troops in Central and South America. He was also a cocaine trafficker, which US intelligence services were aware of, but they permitted him to do so because he was useful to their covert military operations in Latin America. In the early 1980s, he unified Panama’s military forces and renamed them the Panamanian Defense Forces. Following that, he was appointed to the rank of general in his country’s defense forces, effectively making him the de facto leader of Panama. He also canceled Panama’s presidential elections and attempted to impose a puppet administration on the country. Following the failure of a military coup against Manuel, the United States invaded Panama, and the dictator was forced to surrender in January 1990.

Manuel Noriega was born in Panama City on February 11, 1934. Born from a poor Colombian family, he grew up in poverty. His father worked as an accountant, while his mother used to work as his father’s maid.
Manuel was given up for adoption when he was five years old by a school teacher and went on to study at the National Institute, a well-known school in Panama, with the intention of becoming a physician.
Noriega obtained a scholarship to study at the Chorrillos Military School in Lima, Peru, because his family could not afford to send him to medical school.
Manuel finished with a degree in engineering in 1962 and began his military career.

Manuel Noriega was commissioned as a sub-lieutenant in the Panamanian National Guard and assigned to Colon when he returned to Panama. He received a series of promotions and met Captain Omar Torrijos.
Manuel also received counter-intelligence and intelligence training from the US army at Fort Gulick in the Panama Canal Zone in 1967, as well as a course in psyops or psychological operations from Fort Bragg in North Carolina.
In 1968, he was promoted to lieutenant and participated in the failed military coup of 1969 with Omar Torrijos.
As a return for his allegiance, he was promoted to lieutenant colonel and then granted the job of chief of military intelligence by Omar. Manuel claims that, following Torijos’ directions, he negotiated an amnesty for roughly 400 guerilla fighters who had been defeated previously, allowing them to return to areas like Costa Rica and Honduras after their exile.

Manuel was assigned the role of chief of military intelligence and was able to make relations with the United States’ intelligence service.

Manuel Noriega was the most dreaded figure in Panama by the late 1970s. Manuel cooperated with other civilian and military officials after Torijos died in a plane crash in 1981, in order to obtain the upper hand.
Manuel Noriega had a busy year in 1983, as he managed to unite the Panamanian military forces into the Panamanian Defense Forces, take command of the National Guard, and rise to the rank of general.
Manuel was charged with a series of criminal crimes in the mid-eighties in connection with the cruel and brazen murder of Hugo Spadafora, one of his most vociferous opponents.

A number of evidences were provided against him for money laundering related to drugs and selling prohibited American information and technology, putting him at odds with the United States of America’s government. The struggle got more serious as a result of Manuel’s quick transfer of power, which was agreed upon in a pact known as the “Panama Canal Treaty.”

Manuel Noriega canceled Panama’s presidential elections in 1989, and he ruled the country with the help of a puppet government with virtually no power.

Following the failure of a military coup against the dictator, the United States military forces invaded Panama. Manuel sought refuge in Panama City’s Vatican embassy, where he resided for ten days.
Manuel Noriega eventually surrendered to the United States on January 3, 1990. He was then transported to Miami and accused with a number of criminal offenses. Manuel was convicted of cocaine trafficking and money laundering by a federal court in the United States in 1992. He was sentenced to 40 years in prison, however his sentence was reduced due to his good behavior while inside.

Noriega was finally repatriated to Panama on December 11, 2011, where he began serving three twenty-year prison sentences.

Manuel Noriega’s personal life is largely unknown. In the late 1960s, Manuel Noriega married Felicidad Sieiro de Noriega, and the pair produced three daughters: Sandra, Thays, and Lorena.
After US military soldiers invaded Panama and overthrew Manuel’s dictatorship in his own country, his wife, daughters, a 4-month-old grandchild, and a son-in-law sought safety in the residence of the Ambassador of Cuba.
Manuel Noriega was diagnosed with a brain tumor in 2012. He underwent surgery to remove the tumor on March 7, 2017, but suffered a cerebral hemorrhage during the procedure. He was admitted to the Santo Tomas hospital’s intensive care unit in Panama City.
He died on May 29, 2017, at the age of 83, in Panama City’s Santo Tomas hospital.

Manuel Noriega worked for the CIA and assisted them with their activities in Central and South America.