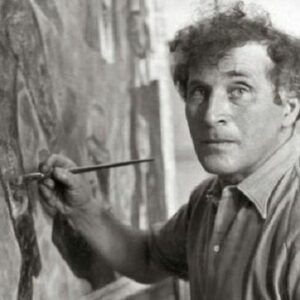 A well-known Russian artist of the 20th century was Marc Chagall. When he was studying painting under the direction of Leon Bakst, the Russian painting style had a significant impact on him. He used to paint pictures at the time by thinking back to his early years. ‘Hommage Apollinaire,’ ‘The Fiddler,’ and ‘Paris Through the Window’ are a few of his earlier paintings. Later, he added to his repertoire of artistic endeavors by painting, creating book illustrations, and creating patterns for stained glass and tapestries. His magnificent designs can be seen in the foyer of the Metropolitan Opera House in New York, the National Bank Building in Chicago, the ceiling of the Grand Opera in Paris, the new Parliament in Jerusalem, and many other places. He began residing in the United States during World War II after fled Nazi-occupied Paris. Later, through his writings on Jewish martyrs and refugees, he recounted his terrible experience with the emergence of the Nazis. His artwork is dominated by color. He developed his own original painting style while drawing inspiration from the artistic excellence of Cubism and Fauvism. He is regarded as a modernist pioneer and has received numerous honors, including the Grand-Croix de la Legion d’honneur, the highest accolade given by the French government.

Khatskl Shagal and Feige-Ite gave birth to Marc Chagall as Moishe Segal, the oldest of their nine children. In Liozna, Belarus, he was a member of a Lithuanian Jewish family.
His early education was received at a Jewish primary school. He eventually attended a public school to further his education. He began working as a photo retoucher at the Meshchanivov photography studio in Vitebsk.

At the Zarechenskaya synagogue in Vitebsk, where he also studied the violin, he sang for a brief time as the cantor’s assistant. He studied painting in Vitebsk under Yehuda Pen for two months.
He attended the Imperial Society of Art Supporters in St. Petersburg in 1907 to study art under Nicolai Roerich. He later studied painting with Leon Bakst and Mstislav Doboujinsky.

The career of Marc Chagall

He worked for Russian-Jewish attorney Maxim Vinaver while residing in Paris between 1910 and 1914. A. Salmon, M. Jacob, and Robert Delaunay were among the notable people he interacted with while residing in La Ruche.

During this period, Pablo Picasso, George Braque, and other well-known artists of the time were developing new Cubist, Fauvist, Surrealist, and other avant-garde currents, which he became familiar with.

He learned about Wassily Kandinsky’s artistic efforts when he traveled to Germany in 1914. In Berlin’s Strum gallery, he held his first solo exhibition. When World War I broke out, he later traveled back to Russia.

He was the Commissar of Arts in Vitebsk Province following the Russian Revolution in 1917. He actively contributed at the time to the establishment of the Vitebsk Art School. Additionally, he was a teacher here.

He moved to Moscow in 1920 and from 1920 to 1922 served as the Art Director at the Moscow Jewish Theatre, where he played a significant part in the stage shows.
In his capacity as Art Director, he created the set design for the “Fiddler on the Roof” production. His stage decorations showcase his inventiveness in surrealism and helped him become well-known as a multi-cultural artist.

He left the country in 1923 and arrived in Paris as a result of internal problems in Russia. His memoirs with graphics were released this year. He then produced graphics for “Dead Souls” by Nikolai Gogol.
He created the illustration of the “Bible” in 1930. In 1937, he was naturalized as a French citizen.
He ran away from the German occupation of Paris in 1941 and fled to New York, where he resided until 1947.

He created the set decorations for “Firebird,” a ballet and orchestra event, which was performed in New York. Later, he created the stage for the opera “Aleko.” In 1950, he relocated to Provence in France after returning to Europe.

His artistic endeavors later included creating stained glass, ceramics, and sculpture. His stained glass window creations can be seen in a number of Catholic and Protestant cathedrals in France, Switzerland, and Germany.

He moved to Saint-Paul-de-Vence in 1966. He displayed his artwork at this time in several renowned museums and galleries, including the Louvre and the Petit Palais in Paris.
In 1977, for the country’s bicentennial commemoration, he created the America Windows as a gesture of appreciation to America for giving his family shelter during World War II.

The Big Works of Marc Chagall

His stained glass creations are examples of his unique imagination, where one can observe a flawless fusion of vibrant colors and natural light with its ever-changing refraction. His remarkable efforts in stained glass are demonstrated by the windows of the Metz Cathedral in France.

He created three tapestries for the state hall of the Knesset in Israel, together with 12-floor mosaics and a wall mosaic, under the guidance of Belgian craftswoman Yvette Cauquil-Prince.

In 1915, he got hitched to Bella Rosenfeld. Ida was the name of their daughter. For his famous series of paintings that feature impassioned flying figures, Bella served as the model. 1944 saw Bella’s death.
In 1952, he got married a second time, this time to Valentina Brodsky. He made all crippled individuals around the world the subject of his final artwork, “Job.” In Saint-Paul de Vence, France, he passed away at the age of 97.

The estimated net worth of Marc Chagall is unknown.

This renowned artist created the stained-glass window “Peace” in honor of Dag Hammarskjold, the second secretary general of the UN. Along with musical elements, this window’s design features emblems of love and peace.