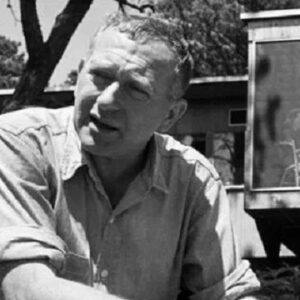 Marcel Lajos Breuer was a well-known modernist architect and designer who is widely regarded as one of the most influential proponents of International Style. This Hungarian-born architect attended Weimar’s renowned ‘Bauhaus’ design school, where he received instruction in the school’s cabinet-making workshop. The ‘Bauhaus’ exhibition ‘Haus am Horn’ in 1923 included several of this promising student’s furniture ideas, including a journeyman project, a dressing table. In his early career, he rose to become master and leader of the ‘Bauhaus’ cabinet manufacturing workshop, where he had previously studied as a student. ‘Wassily,’ a steel tube chair, was one of his first inventions. He was a professor of architecture at Harvard University’s ‘School of Design.’ Later, he founded his own company, Marcel Breuer and Associates. ‘Gropius House,’ ‘Hagerty House,’ assignments of St. John’s Abbey and University in Collegeville, Minnesota, ‘UNESCO World Headquarters,’ ‘Department of HUD – Headquarters,’ in Washington, D.C., and ‘Atlanta Central Public Library,’ in Atlanta are among his significant works. In 1968, during their hundredth annual convention in Portland, Oregon, the ‘American Institute of Architects’ presented him with a ‘Gold Medal.’

He was born on May 21, 1902, in Pécs, Hungary, to Jacques Breuer and Franciska (Kan) Breuer, in the Danube valley town of Pécs. His father worked as a doctor. In 1920, he received his diploma from Pécs’ ‘Magyar Királyi Föreáliskola.’ He began studying at the ‘Academy of Fine Arts’ in Vienna after earning a scholarship, but dropped out after a few weeks and joined a Viennese architectural office. He expressed a strong desire to learn cabinetmaking from the architect’s brother.

After learning about the ‘Bauhaus’ design school in Weimar, he traveled to Germany in 1921. Walter Gropius established and headed the Bauhaus movement, which applied contemporary concepts to fine arts and industrial design. He began his education at the ‘Bauhaus,’ and in 1921, he developed a ‘African Chair’ and ‘Sommerfeld House’ furniture, as well as a ‘Slatted Chair,’ which he began developing in 1922.

In 1924, he finished his post-graduate studies at the ‘Bauhaus’ and relocated to Paris, France, to continue his architectural studies. He met Le Corbusier, one of the forefathers of modern architecture, here.

In 1925, Walter Gropius persuaded him to return to the ‘Bauhaus,’ which had relocated to Dessau at that time. He was made a master as well as the leader of the ‘Bauhaus’ cabinet-making workshop. From 1925 to 1931, he was also in charge of creating the interiors of a new school building in Dessau. In 1925, he designed the tubular metal chair ‘Wassily’, which was influenced by the architecture of bicycle handlebars. The ‘Thonet Brothers’ in Germany mass-produced several of his architectural inventions, including the chair.

He was given the task of designing the interiors of the ‘Weissenhof Complex,’ a housing estate created for an exhibition in Stuttgart, Germany, in 1927. In 1932, he won his first independent home contract, ‘Harnischmacher House I,’ in Wiesbaden, with the support of Gropius.

He created the ‘Doldertal Apartments’ in Zurich for Sigfried Giedion, a Swiss architectural historian, between 1932 and 1936 in collaboration with Alfred and Emil Roth.  The ‘Bauhaus’ was forced to close in 1933 due to the rise of the Nazis in the 1930s and Hitler’s leadership. In 1934, his mentor, Walter Gropius, deftly departed Germany, and in 1935, Breuer followed Gropius’ advise and migrated to London.

He went to work for the “Isokon” firm, which was an early proponent of modernist architecture in the United Kingdom, designing and constructing modernist homes and apartments, as well as their furnishings and fittings. He was selected by the company’s CEO, Jack Pritchard. In Isokon, he designed the ‘Long Chair’ from 1935 to 1936, as well as ‘Nesting Tables,’ ‘Dining Table,’ and ‘Stacking Chairs’ in 1936.

In partnership with English architect Francis Reginald Stevens Yorke, professionally known as F.R.S. Yorke, he also designed Gane’s Exhibition Pavilion (1936) in Bristol, model for the ‘Civic Center of the Future (1936), and Houses in Hampshire (1938) in Sussex.

When Walter Gropius was appointed Chairman of the ‘Department of Architecture’ at ‘Harvard University’ in the United States in 1938, Breuer joined the faculty as well. I. M. Pei, Ulrich Franzen, Paul Rudolph, and Edward Larrabee Barnes were among his students.

Gropius and Breuer developed a collaboration and collaborated on a number of projects. The ‘Gropius House’ (1938) in Lincoln, Massachusetts; the ‘New York World’s Fair’ (1939) in Pennsylvania State Exhibition; the ‘Alan I W Frank House’ (1939-40) in Pittsburgh; the ‘Weizenblatt House’ (1941) in Asheville, North Carolina; and the ‘Aluminum City Terrace’ (1942–44) in New Kensington, Pennsylvania are just a few examples. They went their separate ways professionally after that.

In 1945, while still a student at Harvard, he worked on the ‘Geller House I’ in Lawrence, New York, which was the first house to incorporate Breuer’s ‘binuclear’ house idea. Bedrooms, living room, dining room, kitchen, and other areas were divided into parts according to the design, which were separated by an entry hall and featured a stunning butterfly roof. The outstanding architecture was afterwards added to the lexicon of the well-known modernist architectural style.

In 1946, he moved to New York City and started up shop in an East 88th Street townhouse. His principal draftsman was Harry Seidler, an Austrian-born Australian architect who became a pioneering proponent of Modernist architecture in Australia.

He built two houses for himself, the first being the ‘Breuer House,’ a cantilevered house built in 1947 in New Canaan I, Connecticut, and the second being a rubble stone house completed in 1951 in New Canaan II, Connecticut.
Throughout his career, he collaborated with a variety of collaborators, including Eduardo Catalano, Herbert Beckhard, Tician Papachristou, and Hamilton Smith.

From 1953 until 1976, he worked alongside Hamilton Smith, Craig Ellwood, Robert Gatje, and Herbert Beckhard on a series of commissions from ‘Torin Corp,’ included manufacturing units, an administration building, a technical center, and a machine division.

His big break came in 1953, when he was awarded two of the most important institutional building commissions. The first was the ‘World Headquarters’ of the UNESCO (‘United Nations Educational, Scientific, and Cultural Organization’) in Paris, which he designed alongside Bernard Zehrfuss and Pier Luigi Nervi. The second was a series of commissions from St. John’s Abbey and University in Collegeville, Minnesota, which he completed between 1953 and 1968, largely in collaboration with Hamilton Smith.

In his life, he married twice. Marta Erps was his first wife, and Constance Crocker Leighton was his second wife, with whom he had two daughters, Cesca and Tom. He died in New York City on July 1, 1981.

Marcel is one of the wealthiest architects and one of the most well-known. Marcel Breuer’s net worth is estimated to be $1.5 million, according to Wikipedia, Forbes, and Business Insider.