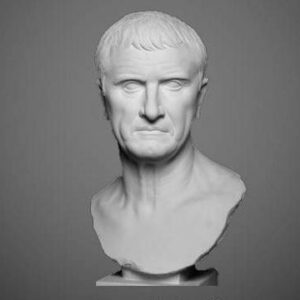 Lucius Marcus was A well-known Roman general and politician, Crassus. Along with Julius Caesar and Pompey, he was a vital member of the First Triumvirate, which was formed to oppose the Senate’s authority. As a military leader under Lucius Cornelius Sulla, he started his public career. Eventually, through real estate ventures, Crassus accumulated enormous money for himself. After defeating the Spartacus-led slave uprising, he also rose to political prominence. He joined the First Triumvirate with Julius Caesar and Pompey the Great, who was regarded as the best military leader of his day. Despite having different political aspirations and ideas, the three were able to control the Roman political system because of their cooperation. The coalition, though, eventually broke down due to their conflicting egos and goals. Crassus was well-liked in his own day, and his fame has persisted into the present. In the book “Spartacus” by Howard Fast, he played a significant role. He was also portrayed in the corresponding 1960 feature film and 2004 TV movie.

In the Roman Republic, Marcus Licinius Crassus was born in 115 BC. He was the younger son of Publius Licinius Crassus, a well-known senator. When Cornelius Cinna rose up in 87 BC, his father killed himself and his brother was killed. Young Marcus then retreated into hiding.

Marcus emerged from hiding following Cinna’s passing, assembled a small army, and then joined Lucius Cornelius Sulla as he traveled back to Italy from the East. Sulla engaged in combat with Gnaeus Papirius Carbo, the commander of the Marian army, during his second civil war.

Marcus Licinius Crassus aspired to restore his family’s lost fortunes after the battle. The assets of Sulla’s victims, which were cheaply auctioned off, began to be acquired by Crassus. Sulla gave him his entire support in this endeavor.

Through a variety of methods, Crassus amassed a vast amount of fortune over the following few years. While some of his riches were obtained through conventional means, he also made some through the sale of slaves, the manufacturing of silver, and his speculative real estate investments. Pliny estimated that he had a net worth of about 200 million sestertii. Plutarch claims that his fortune increased from just under 300 talents to 7,100 talents.

Crassus then started to purchase properties that had been seized as a result of prescriptions. He also gained notoriety for purchasing burnt-out and collapsing structures. He acquired a substantial portion of Rome in this manner. He used slave labor to reassemble them. Additionally, he was rumored to have made friends with priestess Licinia solely to envy her possessions.

After accumulating wealth, he then concentrated on advancing his political career. Despite the fact that he appeared to have a promising political future due to his money and background, he encountered difficulty when Pompey the Great used blackmail to force Sulla to give him a victory in Africa.

The order of offices held by people vying for political power in ancient Rome was called the cursus honorum, and Crassus quickly reached the top. Under Spartacus’ direction, the infamous two-year slave uprising began during this time.

The slave uprising was initially not taken seriously by the Senate, but they quickly came to see that it was a serious problem that presented a threat to Rome itself. Crassus promised to equip, train, and command additional troops at his own expense after many legions were routed and countless Roman leaders were killed or imprisoned.

Spartacus, his opponent, proved to be a very capable fighter, and finally, some of Crassus’ troops left the conflict. Crassus utilized the practice of decimation to punish his men. It involved choosing one man at random from ten to be executed. Crassus, therefore, demonstrated that he was significantly more dangerous than the adversary, which greatly enhanced the soldiers’ fighting spirit.

Though Spartacus first managed to flee, he ultimately made the decision to fight back when Pompey and Varro Lucullus aided Crassus. Later, in the decisive Battle of the Siler River, Crassus emerged triumphant and managed to capture 6,000 slaves alive. During the combat, Spartacus attempted to murder Crassus; he was unsuccessful, but he was able to kill the two centurions who were protecting him.

Although Spartacus was thought to have died in the conflict, his corpse was never discovered. In addition, Crassus commanded the execution of the 6,000 slaves as a warning to others who might later plot against Rome. As he executed the few remaining slaves who had managed to flee, Pompey, who was frequently seen as Crassus’ greatest political adversary, also received some credit for putting an end to the slave insurrection.

A Triumvirate of Marcus Licinius Crassus

In 65 BC, Crassus and Quintus Lutatius Catulus were appointed as the censors. Soon after, he also started supporting Julius Caesar financially and helped him win the election to be the Pontifex Maximus. Caesar’s effort to seize control of military operations had the support of Crassus as well.

Caesar quickly rose to fame as a popular, while Pompey developed a reputation as a formidable military leader. Crassus was Rome’s best landowner and richest man at the same time. The First Triumvirate was an alliance that the three chose to join because they all shared the desire to break the Roman Senate’s influence over politics.

The three agreed that Crassus and Pompey should be appointed consuls once more, with Crassus receiving a five-year command in Syria and Pompey receiving the same assignment in Spain. They would also demand that Caesar’s authority be renewed, giving him a five-year extension on his tenure as gaul’s ruler. As anticipated, Crassus eventually traveled to Syria in 54 BC.
catastrophe in Parthia

After Crassus was given Syria as his province, he amassed enormous wealth by extorting money from the local populace and winning wars. He later made an attempt to take over Parthia because it was a prosperous region. He also sought to equal the military prowess of Caesar and Pompey.

However, Crassus was routed at Carrhae, despite the fact that his adversarial forces were smaller. His soldiers were unable to defeat the expert mounted enemy archers because he lacked cavalry and logistical backup. This compelled his men to give up. As a punishment for his enormous hunger for wealth, Crassus is claimed to have been executed after being captured alive by having molten gold poured down his neck.

The estimated net worth of Marcus Licinius Crassus is unknown.

The Crassus figure has recently appeared in a number of movies, dramas, books, and video games.