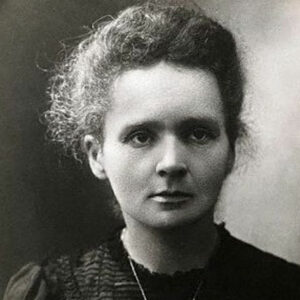 Marie Curie was a scientist and chemist who is most known for her work on radioactivity studies. She was the first female Nobel Laureate and the first female professor at the ‘University of Paris.’ She is also the only woman to win the prestigious Nobel Prize twice, and the only person to win it in two separate fields of science. Marie Curie was a famous scientist and chemist who dedicated her life to research and discovery. Her groundbreaking discoveries have acted as a source of inspiration for scientists around the world. Scientists’ orthodoxy was shattered when they were exposed to a new line of thought on matter and energy as a result of her discoveries. Curie is credited for not only coining the term “radioactivity,” but also with theorizing the notion of radioactivity. Furthermore, the elements polonium and radium, as we know them now, were discovered because to her unwavering dedication and hard effort. She even worked on the technology of isolating radioactive isotopes during her lifetime. Curie made significant contributions during ‘World War I,’ founding the first-ever military field radiological centers, in addition to her scientific activities. She died in 1934 as a result of extended radiation exposure.

Marie Curie was born Maria Salomea Skodowska in Warsaw, Congress Poland, Russian Empire, on November 7, 1867. Bronislawa and Wladyslaw Sklodowski had five children, and she was the youngest. Both of her parents worked as educators.
She had a strong interest in mathematics and physics when she was a child, following in her father’s footsteps. She enrolled in a gymnasium (a sort of school) after completing her preliminary education from ‘J. Sikorska,’ and graduated with a gold medal in 1883.
She got a teaching post at the ‘Flying University’ after being unable to enroll at the men-only ‘University of Warsaw.’ She did not, however, allow her desire of receiving an official degree to fade away, and she made an agreement with her older sister Bronislawa, under which she would initially help Bronislawa and later be assisted by her.
To help support her sister’s schooling, she took on odd occupations such as tutoring and governessing. Meanwhile, she continued to study books in her leisure time to understand new concepts. She even began her practical scientific education in a chemistry lab.
She traveled to France in 1891 and enrolled at the ‘Sorbonne University.’ It was there that she was given the name Marie. With little financial resources, she turned to tutoring in the evenings to supplement her income.
She graduated with a physics degree in 1893 and a mathematics degree the following year. She began her scientific career by studying the magnetic characteristics of several types of steel.
She was introduced to Pierre Curie, an instructor at the ‘School of Physics and Chemistry,’ because she needed a larger laboratory. Curie assisted her in finding a more suitable workspace.
Despite her repeated attempts to return to Poland and continue her studies there, she was denied a job in Poland due to her gender. As a result, she returned to Paris to complete her doctorate.

Henri Becquerel’s discovery of uranium salts generating rays in 1896 piqued her interest and encouraged her. She subsequently increased the intensity of her research and the rate at which she worked. She used an electrometer to verify that the rays stayed constant regardless of the uranium’s state or form.
She discovered that the rays were emitted from the element’s atomic structure rather than the result of molecular interaction after doing her research. The field of atomic physics was born as a result of this groundbreaking discovery.
She got a teaching position at the ‘École Normale Supérieure’ because pursuing research did not provide much financial aid to the family. Meanwhile, she continued her studies using the uranium minerals ‘pitchblende’ and ‘torbernite,’ which are both uranium minerals.
Pierre abandoned his crystal research in 1898 to work with Marie Curie, who had piqued his interest with her work. They started a research project to find out about other radiation-emitting chemicals.
They found a new element that was also radioactive in 1898 while working on the mineral ‘pitchblende.’ It was given the name polonium after Poland. Later that year, they identified a new element, which they termed ‘radium.’ They coined the term ‘radioactivity’ during this time period.
To erase any questions regarding their discovery, the two tackled the strenuous work of extracting polonium and radium in their pure form, from the material ‘pitchblende.’ By differential crystallization, they were eventually able to separate radium salt in 1902.
Between 1898 and 1902, Pierre and Curie published approximately 32 scientific articles detailing their study on radiation. When exposed to radioactivity, tumor-forming cells were destroyed faster than healthy cells, according to one of these papers.
She obtained her doctorate from the ‘University of Paris’ in 1903. Pierre and Curie were awarded the ‘Nobel Prize’ in physics in the same year, but they didn’t receive it until 1905.
Following Pierre’s death in 1906, ‘Sorbonne University’ offered her his physics chair and professorship, which she accepted in order to establish a world-class laboratory. She discovered radium and established an international standard for radioactive emissions in 1910, which was later called after her surname.
She was awarded a second ‘Nobel Prize,’ this time in chemistry, in 1911.
With the backing of the French government, she was able to establish the ‘Radium Institute’ thanks to her international popularity and reputation. The center’s mission was to perform research in chemistry, physics, and medicine.
She established a radiography center to help military doctors in treating sick soldiers during World War I. She oversaw the deployment in the field of 20 mobile radiological vehicles and 200 radiological units. Her x-ray units are thought to have treated nearly one million wounded soldiers.
After ‘World War I,’ she wrote a book called ‘Radiology in War,’ which documented her experiences during the conflict.
She spent the majority of her final years traveling to other nations to gather cash for radium research.
She was named a fellow of the ‘French Academy of Medicine’ in 1922. In addition, she was elected to the League of Nations’ ‘International Committee for Intellectual Cooperation.’
She was appointed to the ‘International Atomic Weights Committee’ in 1930.

She was the one who came up with the word “radioactivity” and theorized about it. She was also the discoverer of two new elements, polonium and radium. She also devised procedures for isolating radioactive isotopes.

For their exceptional services and combined researches on the radiation phenomena discovered by Professor Henri Becquerel, Marie Curie and her husband Pierre Curie were jointly awarded the ‘Nobel Prize’ in physics in 1903.
She received the ‘Nobel Prize’ in chemistry in 1911 for her contributions to science, including the discovery of radium and polonium, radium isolation, and the investigation of the nature and compounds of radium.
Her name has been given to a number of structures, institutions, universities, public spaces, highways, and museums. There are also a number of pieces of art, novels, biographies, films, and plays that depict her life and work.

Professor Józef Wierusz-Kowalski, a Polish physicist, introduced her to Pierre Curie. Because they both shared a passion for science, there was instant spark between them.
Pierre proposed to her, but she turned him down. On July 26, 1895, he tried again, and the two married. They were blessed with a baby girl named Irene two years later. Eve, their second daughter, was born in 1904.
Marie died of aplastic anemia as a result of extended radiation exposure on July 4, 1934, in the ‘Sancellemoz’ sanatorium in Passy, Haute-Savoie, France.
Her mortal remains were buried in Sceaux adjacent to Pierre Curie’s mausoleum. Their remains were moved to the ‘Pantheon’ in Paris almost six decades later.

She is the first woman to earn the renowned ‘Nobel Prize,’ as well as the only person to win it in two separate fields of science. She is credited with inventing the term “radioactivity.”