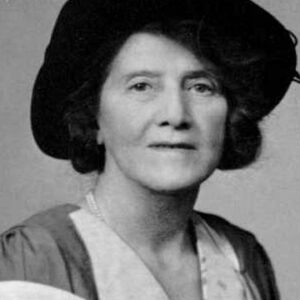 Marie Stopes was a British novelist and palaeobotanist who was credited with popularizing the necessity of birth control and contraception in England. She was a leading proponent of contraceptives and a key figure in the early family planning movement. Stopes discussed romantic and sexual happiness in marriage, as well as birth control and contraception, during a period when discussing sexuality in public was frowned upon. The Church condemned her novels, accusing her of being unashamedly brash and shameless in her writing. Despite this, the social reformer’s passion was not dampened, and she maintained her battle for women’s rights. Stopes quickly gained a lot of attention, prompting her to continue writing for her cause. It was thanks to her efforts that books on human sexuality gained societal approval. Stopes was an academician and palaeobotanist before becoming a campaigner, which is interesting because she is best known as a proponent of birth control and family planning. Stopes was the first female science academician at the University of Manchester and the youngest person in Britain to get a doctoral degree from University College London. She was a true reformer who made significant contributions as a palaeobotanist and author.

Marie Stopes was born in Edinburgh, Scotland, on October 15, 1880, to Henry Stopes and Charlotte Carmichael Stopes. Her father was a palaeontologist and engineer, while her mother was a Shakespeare scholar. When she was six years old, her family relocated to London.

Stopes attended the St George School for Girls in Edinburgh from 1892 to 1894 after being home-schooled. She afterwards attended the North London Collegiate School. Stopes completed her early education at University College London, where she majored in botany and geology. She received a B.Sc. honors degree in 1902 and a doctoral degree from University College London the following year, making her the youngest person in Britain to accomplish so.

Stopes’ scientific career got off to a good start. She was fascinated by the composition of coal and performed research on the evolution of angiosperms. Her academic achievements won her a grant from the Royal Society of the United Kingdom. In 1907, she traveled to Tokyo on a research trip based on the same. Stopes spent a lot of time around the Hokkaido coal mine studying and exploring fossilized flora. Under the title ‘Journal from Japan,’ she began publishing her daily results from her studies and expeditions in 1910.

The Geological Survey of Canada tasked her with determining the age of the Fern Ledges in 1910. She relocated to North America and immersed herself in museum geological collections. In the meanwhile, she married Reginald Ruggles Gates in St Louis, Missouri, in 1911. She obtained a post as a paleobotany instructor at University College in 1913. Due of Gates’ impotency, her marriage to him was terminated in 1914.

She maintained her study program and published many publications in her field of expertise beginning in 1914. ‘The Constitution of Coal,’ ‘The Four Visible Ingredients in Banded Bituminous Coal: Studies in the Composition of Coal,’ and other works were published during this time.

While the legal process for her divorce was in progress, Stopes shifted her focus away from science and onto marriage, love, and sex. Stopes began writing a book focused on the themes of love, marriage, and sex after being influenced by Margaret Sanger’s work on birth control.

In 1913, Stopes completed her novel, “Married Love.” However, she was unable to find a publisher for the book because it was perceived as being blatantly loud and bold in its description of sexual relationships. Stopes met her future husband Humphrey Roe, a pilot and philanthropist with a similar interest in birth control, in 1917. He published her novel, ‘Married Love,’ in 1918. The book was an instant hit despite being criticized by the Church, the press, and the medical community. Within a fortnight, it had sold over 2000 copies and had been reprinted six times before the end of the year.

The phenomenal popularity of ‘Married Love’ elevated Stopes to a legendary status. Her outspoken views on sexual relationships and marital equality for men and women drew a lot of attention. Stopes began receiving letters from women seeking her counsel on marital troubles and contraception.

Stopes released her second book, ‘Wise Parenthood,’ as a follow-up to ‘Married Love,’ taking advantage of the widespread notoriety and recognition. The book was a birth control guidebook, as the title indicates. She advocated for the use of cervical caps for contraception throughout the book. Her illustrations of human anatomy even provided precise information to her viewers on the actual aspects of sexuality.

She published a 16-page booklet in 1919, aiming mostly at the working class. The leaflet, titled ‘A Letter to Working Mothers,’ was a reduced version of her previous book, ‘Wise Parenthood.’  Stopes and her husband Roe launched a family planning clinic in London in 1920 after she resigned from her post as a lecturer at University College. The Mother’s Clinic was available to all married women and provided free reproductive health and birth control counseling.

She established the Society for Constructive Birth Control and Racial Progress, a support group for the clinic, in 1921. Her Mother’s Clinic relocated to Central London in 1925, where it continues to this day. She established a modest clinic network in the United Kingdom. She established clinics in Leeds, Aberdeen, Belfast, Cardiff, and Swansea by the 1930s.

Haliday Sutherland, a Roman Catholic doctor, authored a book in 1922 criticizing Stopes for utilizing impoverished women for birth control research. She instead sued Sutherland for libel, denying the claims. The trial of Stopes and Sutherland received a lot of attention. Despite the fact that Sutherland was found not guilty, the trials brought Stopes a lot of attention.

She published the book ‘Roman Catholic Methods of Birth Control’ in 1933. She used it to write a formal rebuttal to the Church’s attacks on her work. Other family planning organizations emerged by 1930. They founded the National Birth Control Council with Stopes, which subsequently became the Family Planning Association.

Stopes got disillusioned with her humanitarian mission at the conclusion of her career and retired to concentrate on literary interests. She became friends with well-known literary people of the period and was inspired by them to write poetry and plays. ‘Love Songs for Young Lovers,’ ‘We Burn,’ and ‘Joy and Verity’ are some of her works from this period.

The book ‘Married Love,’ a sex handbook that dealt with the topic of birth control, was Stopes’ magnum work. She advocated for the use of birth control and the necessity of family planning throughout the book. Her extreme ideas on sexual relationships and marital equality were expressed in the book.

Despite the Church’s condemnation, it was extremely successful, selling over 2000 copies in less than a month. Stopes’ subsequent works, ‘Wise Parenthood,’ ‘A Letter to Working Mothers,’ ‘Radiant Motherhood,’ and so on, were inspired by its phenomenal popularity.

Stopes had a brief love engagement with Kenjiro Fujii, a Japanese botanist whom she met at the University of Manchester in 1904. In 1911, she married Reginald Ruggles Gates, a Canadian geneticist. Stope’s resistance to drop her maiden name and Gates’ impotency resulted in fights between the two, which culminated in divorce.

Stopes married Humphrey Roe in 1918 after her divorce from Gates. In 1924, the couple had their first child. Stopes had previously delivered a stillborn baby in 1919, which began her lifelong fear of physicians. Humphrey and she divorced in 1938. She moved to Old Higher Lighthouse on the Isle of Portland in Dorset in 1923. She established the Portland Museum there, which opened in 1930.

Stopes’ health deteriorated towards the end of her life. She declined medical treatment, though, since she distrusts physicians. Her illness was only discovered when she was at an advanced stage of breast cancer. She declined traditional treatment after that and instead chose holistic therapy.

On October 2, 1958, at her home in Dorking, Surrey, Stopes passed away. Her clinic was entrusted to the Eugenics Society, according to her bequest. The Royal Society of Literature received the majority of her estate.
Posthumously, an English Heritage blue plaque was erected in Upper Norwood, where she lived from 1880 to 1892, in her commemoration.

The estimated net worth of Marie Stopes is $1.6 Million.