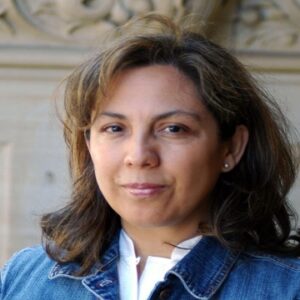 Mariela Griffor is a poet, publisher, and diplomat from Chile. Mariela was born in the Chilean city of Concepcion during a period when her country was transitioning from democracy under President Salvador Allende to dictatorship under General Augusto Pinochet. She traveled to Santiago, Chile’s capital, as a young woman and enrolled at the Technical University, where she was swept up in the revolutionary atmosphere of the moment. She returned to Santiago to join her partner and fiancé, radical activist Julio Carlos Santibáez Romera, after a brief trip in Brazil to pursue her university studies. When Santibáez was brutally murdered by Pinochet government operatives, she was forced to flee to Sweden with their newborn child. After adjusting to life as a refugee, she learned Swedish and began a teaching profession, eventually meeting her future husband, the renowned mathematician Edward Griffor. She and her growing family relocated to Grosse Point, Michigan, after a brief trip to her native Chile. She produced numerous books of poetry after completing her undergraduate education in the United States and was acclaimed as a talented writer. She is now a full-time artist, splitting her time between producing new poetry and running an elitist publishing business she co-founded.

Mariela was born in Concepcion, Chile, on September 29, 1961. She has a younger sister and spent her youth on her grandfather’s sprawling ranch.

She majored in Spanish literature and journalism at Santiago Technical University when she was 19, after studying French and English in high school.

She started active with radical student protest organizations almost immediately after enrolling at the Technical University of Santiago.

The Manuel Rodriguez Patriotic Front (FPMR), led by her boyfriend Julio Carlos Santibáez, was founded in 1983 as the Communist Party’s military wing.

She studied journalism at the Catholic University of Rio de Janeiro for seven months in 1984.
In 1985, she returned to Santiago to live with Santibáez, and after Mariela fell pregnant with Santibáez’s kid, they became engaged to marry.

Santibáez was assassinated on Pinochet’s orders in September 1985.
She was compelled to leave to Västers, Sweden, for fear of her life, where she remained a refugee for the next 12 years. Javiena, her daughter, was born in April 1986.

Mariela returned to Chile for the first time since fleeing the country in 1985 in 1991.
Mariela met her husband, an American mathematics professor, at the University of Uppsala in Sweden, where he was lecturing. Elena, her daughter, was born in 1992.
She and her family spent ten months in Chile in 1997.

Mariela consented to study English and moved to Grosse Point, Michigan, with her husband and family in 1998, after considerable deliberation. Wayne State University gave her a Master’s Degree in 2002.
Marick Press was started by her in 2005.

Mariela’s poetry, which have been published in five volumes, are known around the world for their emotional and evocative passages.

In 2003, she was chosen for Wayne State University’s Urban Writer-in-Residence Program in Detroit.

She won the Carol and Frank Hennessy Award for Poet-in-Residence at the Grosse Pointe Art Center in 2006.
In 2007, she received the International Award from the Wayne County Council of Arts, History, and Humanities.

Mariela fled Chile for Sweden after her fiance was brutally murdered in 1985.
In Sweden, she met and married mathematician Edward Griffor. His husband is a renowned Artificial Intelligence researcher in the globe.

She is a global voice for her hometown and a recognized champion of the fine arts, having directly witnessed the cruelty of the Pinochet administration in her native Chile.

Mariela began her career by authoring pamphlets and tracts for student revolutionary organizations at Santiago’s university.
After relocating to the United States, she wrote her first poem, ‘Prologue.’
Before turning to poetry, she spent 15 years writing nonfiction.
She considers writing to be a kind of ‘dance’ between the writer and the audience.

‘The Psychiatrist’ was inspired by her time as a student in Chile.
She successfully started a Kickstarter campaign in 2014 with her friends to translate Chilean poet Pablo Neruda’s epic poem ‘Canto General’ into English.

She has remarked that she wants the reader to “slow down, contemplate, and remember” after reading her poems.
Mariela spent three years learning Swedish.
Julio, her previous fiancé, is buried at a crematorium in the general cemetery of Santiago, Chile, in grave No. 194, Sector E-5.

She believes the CIA is to blame for the death of her fiance Julio.

Mariela Griffor is one of the wealthiest poets and one of the most well-known. Mariela Griffor’s net worth is estimated to be $1.5 million, according to Wikipedia, Forbes, and Business Insider.