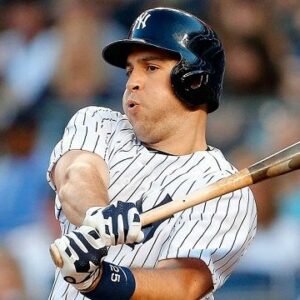 American former baseball player Mark Charles Teixeira announced his retirement in 2016. This first baseman played for the Texas Rangers, Atlanta Braves, Los Angeles Angels of Anaheim, and New York Yankees over the course of 14 MLB seasons. He was dressed in baseball clothes by his parents when he was just a toddler because he was raised in a baseball-obsessed household! He could hit, field, and throw with assurance by the age of four, and by the time he was five, he was already certain that he would become a star baseball player. Teixeira began playing baseball at Georgia Tech University, where he was awarded the Dick Howser Trophy as the year’s best player. He began his professional baseball career with the Texas Rangers and went on to become one of the best switch hitters in MLB history. In 2009, he triumphed in the 27th World Series Championship, showcasing his outstanding performance. He received three Silver Slugger Awards and five Gold Glove Awards. Teixeira, a three-time All-Star and one of the first five switch hitters in MLB history to reach 400 home runs, holds the record for the most games in which he has hit a home run from both sides of the plate. Unfortunately, he began to experience a number of ailments and health issues in 2012, and before the end of the 2016 season, he was forced to retire.

John Teixeira and Margaret “Margy” Canterna welcomed Mark Teixeira into the world on April 11, 1980, in Annapolis, Maryland. His father was a retired Navy officer who worked for an aerospace company, and his mother was a schoolteacher.

In Baltimore, Maryland, at Mount Saint Joseph High School, where he first took up the sport, he won the USA Today All-USA high school baseball team honor in 1998. He was chosen by the Boston Red Sox in the 1998 MLB draft, but he declined the opportunity to play professionally and opted to play collegiate baseball at Georgia Tech.

He represented the Orleans Cardinals in the Cape Cod Baseball League in 1999 and received the Outstanding Pro Prospect Award.

Mark Teixeira was chosen by the Texas Rangers in 2001, and he signed a $9.5 million, four-year contract with them. In 2002, he made his professional debut in the Florida State League before moving up to play for the Double-A Tulsa Drillers. He only played in the minor leagues once, in 2002.

It was in 2003 when he made his debut. He had an OPS of.930, 38 home runs, and 112 RBI in 2004 while batting.281. He won a Silver Slugger Award and a Gold Glove for his efforts in the 2005 season. He was elected to the All-Star Game by his supporters as well. He was named the American League Player of the Month after finishing with 13 home runs and 30 RBI. He had a.301 batting average, 43 home runs, and 144 RBI throughout that season. He also joined an exclusive group of five MLB players who hit 100 home runs in each of their first three seasons.

He won the Player of the Month award in August 2007 after a multi-HR performance against the Arizona Diamondbacks, which also earned him Player of the Week honors. He participated in 54 games with the Atlanta Braves that year after being offered a one-year, $12.5 million contract.

He was dealt to the Los Angeles Angels of Anaheim in July 2008, where he assisted the team in recording its first 100-win season in the organization’s history. He agreed to an $80-million, eight-year deal with the New York Yankees in December 2008, along with a $5-million signing bonus and a no-trade clause.

He helped the Yankees win the World Series in 2009 and was awarded a World Series ring. Post-season, he had trouble continuing his success. Despite a modest lapse in form, he still received the Gold Glove and Silver Slugger trophies for many of his important hits.
Teixeira experienced a number of illnesses and injuries in 2012.

He initially experienced a persistent cough, which was followed by wrist pain and a leg strain. He was thus placed on the disabled list for a while. He worsened his calf injury following a game against the Orioles and was once again placed on the injured list. He did, however, finish the season with a batting average of.251, 24 home runs, and 84 RBI. As the finest fielding first baseman in MLB, his performance earned him a Gold Glove Award and a Fielding Bible Award.

He was diagnosed with a strained wrist tendon in March 2013 and placed on the injured list for 15 days, which was then increased to 60 days till May. He played against the Red Sox on May 31, which worsened his wrist issue and necessitated wrist surgery in July. In the end, he participated in just 15 games all season.

He also experienced a number of illnesses and injuries in 2014 and 2015. In April 2014, while playing against the Toronto Blue Jays, he suffered a serious hamstring injury and was forced to exit the game. His wrist issue became worse in May, necessitating surgery. He soon recovered, though, and in September he helped his group defeat the Red Sox.

He accomplished hitting the most home runs in a season since 2011 during the 2015 campaign, earning himself a spot on his third All-Star squad. He fractured a deep bone in his leg in an August game against the Minnesota Twins. He had to go to New York to see the chief team doctor for the Yankees. He was forced to end the season in September after a fracture in his shin was discovered.
Teixeira, who was 36 at the time, announced his retirement in August 2016. The deal he had signed with the Yankees was then in its final year.

Leigh Williams and Mark Teixeira got married in 2002 after meeting at Georgia Tech. He has two sons, William Charles Teixeira and Jack Gordan Teixeira, as well as a daughter named Addison Leigh Teixeira.
In commemoration of his boyhood buddy Nick Liberatore, who died in a vehicle accident at the age of 16, he started the Mark Teixeira Charitable Fund and presented a scholarship in 2006. He gave six high school students $5,000 in scholarships that year.

American former professional baseball player Mark Teixeira has a $75 million net worth. Mark earned $213 million in compensation alone over the course of his 13-year MLB career.