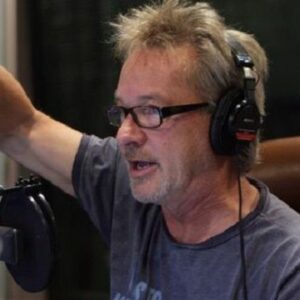 With Brian Phelps, Mark Thompson is a well-known American radio personality. Their morning program, “Mark and Brian,” ran for 25 years until 2012. The pair also served as the hosts of the NBC TV program The Adventures of Mark & Brian. Mark occasionally works as a scriptwriter and actor. In the television series Reba, Wings, and Dharma and Greg, he has made appearances. The Princess Diaries, Jason Goes to Hell: The Final Friday and Rocky V are among the films in which Mark has appeared as an actor. In addition, he penned the screenplays for “2:13” and “Mother Ghost.” The Mark & Lynda Podcast, a show that Thompson and his wife established, addresses problems with family relationships. He co-hosted the podcasts “Cool Stories in Music” and “Pro Football Slam.” His daughter Katie Thompson appears in his final radio program, “Mark in the Morning.” He received an Emmy for hosting “The Andy Griffith Christmas Special” on Fox TV as well as the Marconi Award from the National Association of Broadcasting for Air Personality of the Year. He is regarded as one of America’s all-time favorite radio personalities and has been honored with a Star on the Hollywood Walk of Fame for Radio.

On December 1, 1955, in Florence, Alabama, a middle-class family welcomed Mark LaMarr Thompson into the world. His father had survived the attack on Pearl Harbor. After graduating from the University of North Alabama, he attended Underwood Elementary School.

Mark began his career as a weekend disc jockey at WOWL-FN because he had a lifelong passion in radio. He worked for a number of radio stations in his early career until running into Brian Phelps in Birmingham, Alabama. They formed a pair and rose to fame on the radio.

In his adolescence, Thompson became proficient on the drums and was a huge admirer of Elvis Presley and “the Andy Griffith Show.” He eventually relocated to Los Angeles, where he made a name for himself as a well-known radio host.

The Mark & Brian Show, a radio program that Mark Thompson and Brian Phelps hosted from 1987 to 2012 on KLOS-FM in Los Angeles, California, helped them become well-known. During this time, Mark launched a number of additional entertainment businesses both independently and with Brian.

Based on their radio show, the pair hosted “The Adventures of Mark & Brian” from 1991 to 1992. As a result of its growing popularity, the program was quickly transferred to the network’s primetime lineup.
In three episodes of “Reba” between 2002 and 2003, he made a fleeting appearance. He also got praise for his roles in “Cheers,” “Wings,” and “Dharma and Greg.”

The Princess Diaries, Jason Goes to Hell: The Final Friday, Friday the Thirteenth, and Rocky V are just a few of the films in which he has appeared as an actor. In addition, he contributed to the scripts for “2:13” and “Mother Ghost,” both of which he appeared in supporting roles.

In 2012, he and his family relocated to Charlotte, North California, and he made the decision to stop working as a radio jockey. To keep himself busy, he built up a studio in his house where he could pursue freelance media work.
The Mark & Lynda Podcast, which Thompson and his wife launched, mostly addresses relationship-related topics.
Despite having made his retirement known, his love of the media has kept him engaged in the field. In 2013 and 2014, he co-hosted the Pro Football Slam podcast with Sam Farmer. In 2013, he was the host of the podcast “Cool Stories in Music.”

In 2014, he announced his comeback to the KSWD radio station Los Angeles morning radio show after finally having second thoughts about his retirement plans due to his passion for the media.

Mark Thompson began presenting the classic rock radio program “Mark in the Morning” in 2015. His daughter Katie Thompson and former employee Daniel Mizrahi both appeared on the program. In 2016, he ultimately departed the program, however, he still intends to run his program “Cool Stories in Music.”

Mark has a sizable fan base and is active on social media.

He not only wrote the scripts but also acted in the films “2:13” and “Mother Ghost.”
The Mark & Lynda Podcast was hosted by him and his wife. Additionally, he co-hosted the “Cool Stories in Music” podcast in 2013 and the “Pro Football Slam” podcast from 2013–14.

In 2015, he was the host of the classic rock radio program “Mark in the Morning,” which featured his daughter Katie Thompson.

He was named Air Personality of the Year and received the 1991 Marconi Award from the National Association of Broadcasting.
When Mark Thompson hosted “The Andy Griffith Christmas Special” for Fox TV in 1997, he was honored with an Emmy.

Four best picture nominations were given to his movie “Mother of Ghost,” and Mark was honored for the best screenplay.
In September 1997, he received recognition with a star at 6767 Hollywood Boulevard on the Hollywood Walk of Fame for Radio.

He wed Lynda, a faithful listener of his programs. Despite receiving a cancer diagnosis, it was stated that she was completely healed of the fatal condition in 2012. Mark then made his retirement official and relocated to Charlotte, North California.

They have three kids: Matthew, Amy, and Katie, all of whom were raised as Christians. He is also good friends with his niece Nina and nephew David.

His popularity has been fueled in part by his quick wit and sense of humor. His distinctive speaking voice and accent were also beneficial to his radio career. His fans greatly enjoy his candor when interviewing guests for his shows because he is well renowned for it.

When he went to visit a friend who was being held for drunk driving, he jumped over the counter of the Santa Clarita Sheriff’s Station and was arrested for trespassing. After some time passed and no evidence of ulterior motives was found, he was freed.

One of the wealthiest and most well-liked players in Australian Rules Football is Mark Thompson. Our research of Mark Thompson’s net worth from sources including Wikipedia, Forbes, and Business Insider indicates that it is roughly $1.5 million.

Mark is a skilled drummer as well, and while performing on his regular “Mark and Brian Christmas Show,” he recorded with various bands.