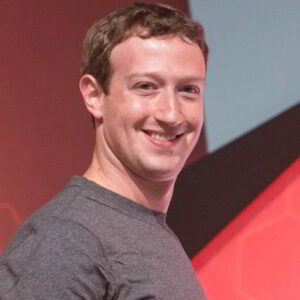 Mark Elliot Zuckerberg is a philanthropist and internet entrepreneur from the United States. He is the current chairman and chief executive officer of Facebook, which he co-founded. Zuckerberg grew up in New York and went to Harvard University to study psychology and computer science. Eduardo Saverin, Andrew McCollum, Dustin Moskovitz, and Chris Hughes, his undergraduate companions, developed Facebook from their dorm room during this time. Initially intended only for select college campuses, the site grew at an exponential rate over the next few years, eventually becoming the world’s largest social networking platform. Facebook had over 2.27 billion monthly active users as of the third quarter of 2018. Zuckerberg is also active with a number of other projects, including Wirehog, a file-sharing application, and Internet.org, a group of organizations seeking to provide affordable access to a variety of internet services in developing nations. Zuckerberg has been involved in a number of legal battles during his professional career. He testified before the US Senate Committee on Commerce, Science, and Transportation in April 2018 about Facebook’s use of personal data in the aftermath of the Cambridge Analytica data hack. Since 2010, he has been included in ‘Time’ magazine’s Person of the Year issue as one of the world’s wealthiest and most important people. In 2016, Forbes ranked him as the world’s tenth most powerful person.

Mark Zuckerberg is the only son of Karen (née Kempner) and Edward Zuckerberg, and was born on May 14, 1984, in White Plains, New York. His father is a dentist, and his mother is a psychotherapist.
Randi, Donna, and Arielle are his three sisters. They grew up in a Reform Jewish family in Dobbs Ferry, New York. He is descended from German, Polish, and Austrian immigrants.
Zuckerberg excelled as a student. He attended Ardsley High School until his junior year, when he transferred to Phillips Exeter Academy in New Hampshire. He won multiple medals in science and classical studies during his time there.
He also attended the summer program at the Johns Hopkins Center for Talented Youth. Zuckerberg is said to speak French, Hebrew, Latin, and ancient Greek fluently. At his prep school, he was also the captain of the fencing squad.
Since he was in elementary school, Zuckerberg has been developing software programs. In the 1990s, his father taught him some of his earliest programming lessons by teaching him Atari BASIC Programming. David Newman, a software developer, later trained him. Zucknet, which is considered a forerunner of AOL’s Instant Messenger, was one of his early inventions.

Mark Zuckerberg got a position at Intelligent Media Group to build a music player called Synapse Media Player while still in high school. When he enrolled at Harvard in 2002, he already had a reputation as a programming genius. He was a member of Alpha Epsilon Pi and Kirkland House as a member of the class of 2006, pursuing degrees in psychology and computer science.
During his sophomore year, he created Facemash, a tool that allowed students to choose the best-looking individual from a collection of photos.
Facemash was shut down by Harvard because it clogged one of its network switches and deprived many students access to the internet during the weekend. Many students also expressed dissatisfaction with the use of their images without their permission. After some time, Zuckerberg issued a public apology.
He started working on the programming for his new website in January 2004. He established “TheFacebook” from his undergraduate dorm on February 4th. Initially, their service was only available at Harvard, but Zuckerberg eventually decided to expand it to other universities.

Mark Zuckerberg dropped out of Harvard in 2004, during his second year, and moved to Silicon Valley. He, Moskovitz, and a few of their pals rented a house in Palo Alto and turned it into their office.
By mid-2004, they’d secured many investors and relocated their operations to a physical location. They did, however, consistently resist major firms’ attempts to buy their budding enterprise. Facebook’s objective, as Zuckerberg later emphasized, is to open the globe; it was never about the money.
In July 2010, Zuckerberg stated that the app’s active user base had surpassed 500 million people. He was placed first on Vanity Fair’s Top 100 “most influential persons of the Information Age” list that year. They passed the one billion user mark in October 2012. Zuckerberg announced in June 2017 that Facebook has reached two billion users.
Wirehog, a peer-to-peer file sharing service, was founded by Zuckerberg, Andrew McCollum, Adam D’Angelo, and Sean Parker in August 2004. However, it received far less traction than its major competitor, i2hub, and was finally shut down. He launched Facebook Platform in May 2007, a program that enables third-party developers to create Facebook applications. In 2010, the current version of the Facebook Platform was released.
Instagram, a photo and video-sharing social media website, was bought by Facebook in 2012. Two years later, the business purchased WhatsApp, a mobile messaging service.
Facebook, Samsung, Ericsson, MediaTek, Opera Software, Nokia, and Qualcomm launched Internet.org in August 2013 to provide better and more inexpensive access to chosen internet services in developing and developing countries.
Zuckerberg has met with foreign leaders including Indian Prime Minister Narendra Modi and Russian President Vladimir Putin to discuss their countries’ technological infrastructure. Despite the fact that Facebook is outlawed in China, the Chinese people hold Zuckerberg in high regard.

ConnectU founders Cameron Winklevoss, Tyler Winklevoss, and Divya Narendra filed one of the first lawsuits against Facebook, alleging that Zuckerberg had taken their idea and turned it into a competing program. After agreeing to transfer approximately 1.2 million common Facebook shares, the case was eventually settled. In addition, the business agreed to pay $20 million in cash.

Mark Zuckerberg was voted Person of the Year by the magazine ‘Time’ in 2010.
In 2013, he was named CEO of the Year at the 6th annual Crunchies.
Zuckerberg received an honorary degree from Harvard in May 2017, five years after dropping out at the college’s 366th commencement event. He had the unfortunate honor of being named the “Misinformer of the Year” award from the progressive media outlet group Media Matters in December 2017.

At a fraternity party while still a Harvard undergraduate, Mark Zuckerberg met Priscilla Chan, a biology student. In the year 2003, they began dating. Chan moved on to the University of California, San Francisco, to study medicine.
They moved in together in his rented Palo Alto residence in September 2010. They married in Zuckerberg’s backyard on May 19, 2012. Chan’s medical school graduation was also recognized at the event.
Before giving birth to their daughter, Maxima, in 2015, Chan had three miscarriages. The couple revealed Maxima’s Chinese name, Chen Mingyu, in February 2016. August, their second daughter, was born in August of 2017.
‘The Accidental Billionaires: The Founding of Facebook, a Tale of Sex, Money, Genius, and Betrayal,’ by American author Ben Mezrich, was published by Doubleday in July 2009. It was then adapted into a film, ‘The Social Network,’ which was released in 2010. The screenplay was written by Aaron Sorkin, directed by David Fincher, and starred Jesse Eisenberg as Mark Zuckerberg.

Mark Zuckerberg was raised Jewish, but later declared himself an atheist. He has recently claimed that his attitude on the matter has evolved and that religion is now very important to him.
The question of Zuckerberg’s political affiliation is being debated. Some people think he’s a conservative, while others think he’s a liberal. Zuckerberg has made charitable contributions to education and immigration reform. He is a supporter of the Black Lives Matter movement and has ordered the words “Black Lives Matter” to be inscribed on the company’s walls.
In December 2015, Zuckerberg and Chan founded the Chan Zuckerberg Initiative, a limited-liability corporation with the mission of “advancing human potential and promoting equality in areas such as health, education, scientific research, and energy.”
Chan and Zuckerberg stated in an open letter to their daughter, Maxima, that they have agreed to donate 99 percent of their Facebook shares to the effort during their lives. They’ve also contributed to a variety of other causes and services, including as the fight against Ebola, Diaspora, an open-source personal web server, and Newark Public Schools.

Mark Zuckerberg has a net worth of $129 billion dollars.

Zuckerberg, like Steve Jobs before him and countless other Silicon Valley CEOs, is paid $1 per year.