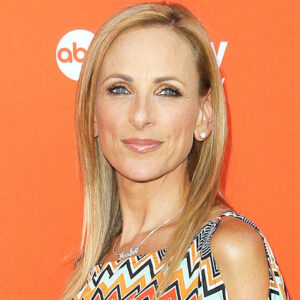 Marlee Matlin (Marlee Beth Matlin) is a well-known actress who has overcome physical challenges to become a role model for women all over the world. Due to a severe fever and illness, Matlin lost her hearing at the tender age of 18 months. Despite this, she continued her acting career and won an Academy Award in 1987 for her role in ‘Children of a Lesser God.’ She also had major and prominent roles in a number of other films and television series, all of which were well-received. She went on to become a role model for many women all over the world. She has two Golden Globe nominations and has won a Golden Globe. Two Emmy nominations are also among her notable accomplishments. She is a role model for many, as one of the most distinguished members of the National Association of the Deaf. For a long time, she has relied on her interpreter, Jack Jason.

Matlin grew up in the small town of Morton Grove, Illinois, where he was born on August 24th, 1965. Her father ran a used car dealership, and her mother worked in the jewelry industry. Matlin was the youngest of three children born to her parents.

Matlin’s parents chose not to send her to a special school and instead enrolled her in the community school. By the age of five, she had learned about the methods by which she could communicate in sign language, despite the fact that her parents were not very good at it.

Her family came from regions of Poland and Russia, therefore she spent her upbringing in a Reform Jewish household. Matlin used to attend a synagogue specifically for deaf people (Congregation Bene Shalom).

She studied Hebrew using phonetics there, and by the time she was Bat Mitzvah, she had a strong grasp of the Torah.

Matlin had her first acting experience when she was a child when she participated in a program put on by the Center on Deafness, which brought together deaf and hearing students.

She earned her first major break when she was cast as Dorothy in the Chicago-based children’s theater company’s production of ‘The Wizard of Oz.’

Matlin pursued her acting career with zeal and vigor well into adulthood. During this time, she also earned a law enforcement degree from the prestigious Harper College.

The Career of Marlee Matlin

Matlin had to spend several years honing her acting skills in Chicago’s various theaters before getting her big break on the big screen. Henry Winkler discovered her while she was performing in a children’s theater play at the International Center on Deafness and the Arts (CODA).

One of her most notable roles was in the 1989 film ‘Bridge to Silence.’ Matlin portrayed a deaf widow in this film, which included some spoken dialogue in addition to signing language.

Aside from acting, Matlin is also a talented writer. Her first novel, ‘Deaf Child Crossing,’ was published in 2002 and was inspired by her childhood. Later on, she wrote a book called ‘Nobody’s Perfect,’ which was a sequel to her first novel.

In 2007, this novel was also staged at the prestigious John F. Kennedy Center for the Performing Arts.
Matlin continued to write throughout her career, and her autobiography, ‘I’ll Scream Later,’ was published in 2009.

She described her childhood and acting career, as well as the hardships and exploitations she faced as a deaf person, in this book.

In 2009, she was honored with a star on the Hollywood Walk of Fame for her contributions to the American film and television industry.

In 1988, she was also awarded the prestigious national Jefferson Award for her contributions to society.

She was also awarded an honorary doctorate degree from Gallaudet University in 1987, which is a private university that primarily focuses on educating all deaf people in society.

Matlin promotes social welfare as a member of numerous charitable organizations. She is a well-known member of Easter Seals (where she serves on the Board of Directors), the Children Affected by AIDS Foundation, VSA Arts, the Elizabeth Glaser Pediatric AIDS Foundation, and the Red Cross Celebrity Cabinet.

In the year 1994, President Bill Clinton appointed her to the Corporation for National Service, where she served as the chairperson of National Volunteer Week.

Matlin was one of the most famous and well-known performers in a television ad campaign aimed at raising funds for various Jewish organizations. Many well-known artists were present, including Joshua Malina, Greg Grunberg, Kevin Weisman, and Jonathan Silverman.

She vividly described her time as a drug addict in her biography, including how she was forced to check herself into the Betty Ford. She also talked about her two-year relationship with fellow actor William Hurt, whom she affectionately referred to as Rocky.

The book goes into great detail about the physical abuse she endured in that relationship, as well as the extensive amounts of drugs she used to mask her pain.

She also spoke about two instances in her life when she was sexually abused as a child, one by a babysitter and the other by a high school teacher.

In the year 1993, Matlin married a police officer named Kevin Grandalski. Their wedding took place at the home of a fellow actor named Henry Winkler five days after her 28th birthday. Sarah, Brandon, Tyler, and Isabelle are the couple’s four beautiful children.

Marlee Matlin is an actress and author from the United States with a net worth of $11 million.

Matlin was thought to have been deaf since childhood due to a condition known as roseolainfantum. However, as she grew older, doctors were able to determine that her deafness was primarily due to a genetically malformed cochlea.