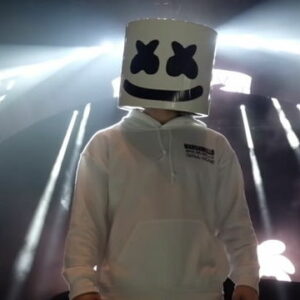 Marshmello is a stage name for an American dance music producer and DJ whose true identity remains unknown. To disguise his face, he wears a Marshmallow helmet in the shape of a bucket. In 2015, he made his debut in the electronic music scene. In 2017, enough evidence arose on social media that identified him as American DJ Chris Comstock, but Marshmello has not formally confirmed or refuted this. Based on an old interview with another DJ, royalty earnings records, and the common manager for Marshmello and Chris Comstock, Forbes magazine published an article in November 2017 claiming Chris Comstock to be Marshmello, but there was no official confirmation from Marshmello’s management or lawyer. Despite the fact that his identity is still a mystery, Marshmello is one of the most renowned and respected DJs in the world today. His anonymity, according to some, adds a layer of mystery to his persona, which helps him develop appeal. He is a prolific artist who has amassed a large body of work in a short period of time.

Nothing is known about Marshmello’s childhood or early years. Even if he is Chris Comstock, as many people and media outlets believe, little is known about him other than the fact that he is from Newtown Square, Pennsylvania, and that he traveled to Los Angeles to seek a music career.

Marshmello is claimed to be one of the world’s fastest-rising DJs, with royalty revenues of $ 21 million in 2017, according to Forbes magazine. In 2016, he was named to DJ Mag’s “Top 100 DJs” list as the “Highest New Entry.”
In 2017, he won the ‘Best usage of Vocal’ award at the ‘Remix awards’ for his remix of British singer Anne-song Marie’s ‘Alarm.’

Marshmello’s net worth is $50 million.

He never talks to journalists and in a video interview in June 2017, gave two thumbs down to the reporter’s question whether he would ever reveal his identity? He tweeted two months later that he does not remove his helmet because he does not seek or require recognition and believes in producing something positive for people to connect with.