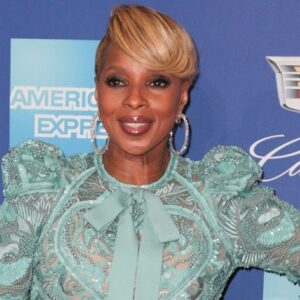 Mary Jane Blige is a well-known American singer-songwriter, actor, model, and musician. She began her career in the late 1980s as a background vocalist, and a few years later, in 1992, she was prepared to make her music debut with her debut album, “What’s the 411?” With the release of her debut, her illustrious career started off, and since then, she has released 13 studio albums and achieved enormous international success. The “Recording Industry Association of America” has designated eight of her thirteen albums as “multi-platinum” (RIAA). She has had 22 nominations and 9 “Grammy Awards.” Mary, dubbed the “Queen of Hip-Hop Soul,” has revolutionized the genre and encouraged a new generation of artists to enter the market.

Cora and Thomas Blige gave birth to Mary J. Blige on January 11, 1971, in the Bronx, New York. She was raised alongside her older sister. All was not well in the household, however, since her parents frequently quarreled over trivial matters and got divorced when Mary was just 4 years old.

Her mother traveled to Georgia with the two sisters. They did not enjoy the way of life there, so she moved back to New York and landed in a seedy neighborhood that was full of rapists, killers, and thieves. In a “not so ideal” environment for young females, Mary spent the majority of her early years living in constant terror for her life.

She quickly developed a deep love for hip-hop music because to her mother’s collection. Every once in a while, Mary would work on her singing. When she was eight years old, her sister and mother encouraged her to pursue her love and helped her win a local singing competition.

She also had a good sense of music thanks to her infrequent trips to her father, which she continued to express through her performances in church choirs and at family events. She opted to drop out of high school while still in junior high because music took up much of her time. She then focused solely on her musical endeavors.
She soon made a connection with someone at ‘Uptown Records,’ a record company known for supporting up-and-coming singers, and joined the recording facility as a background singer. Before she connected with Puff Daddy, who served as a mentor to young Blige, her brilliance had gone unnoticed.
He helped her realize her dream project by taking on the role of executive producer for her debut record.

What’s the 411?, Mary’s debut album, was released in July 1992. Surprisingly, both the public and the critics accepted it. Although it was a unique fusion of two different musical genres, soul and hip-hop, it was favorably received by the audience. The ‘Billboard 200’ chart was topped by the album.

The album’s two most recognized singles, “Real Love” and “You Remind Me,” helped to usher in a new period of music known as “Mary J. Blige” in the United States. She was a gifted young woman with a lot of creativity.
My Life, her second album, was published in 1995. It reflected the suffering she had experienced personally and softened the hip-hop portion. It appeared to want to engage the listeners on a personal level and was successful in doing so. Mary’s album debuted at the top of the charts and sold millions of copies, proving she wasn’t a “one hit wonder.”

My Life was nominated for a “Grammy” in 1996 for “Best R&B Album.” Even though she didn’t get the prize, her performance with Method Man earned her the title of “Best Rap Performance.” The song “My Life” also signaled the end of her relationship with a number of her close friends and the record label “Uptown.” Her internal battle with drug and alcohol misuse, which also led to individuals utilizing her for financial gain, was a contributing factor in this.

She joined the “MCA.” She released her subsequent album, “Share My World,” in 1997. Experts believed that something about her music had altered as a result of working with a brand-new team since it now sounded more like traditional soul music.

The same direction was continued with her fourth album, “Mary.” By that time, it was obvious that Mary was departing from her typical approach, which blended ghetto beats and soul music. It was thought that her music was moving steadily toward soul, which was a good omen.

Her subsequent album, “No More Drama,” included more commercial aspects to her music and built on the success of her earlier records. It turned out to be Mary’s most intimate work to date, and the songs in it represented her personal challenges and heartbreaks.

Her last two albums, “Love and Life” and “The Breakthrough,” further demonstrated her growth as an artist and that she had moved beyond her typical hip-hop and soul music style. Be Without You, the lead single from “The Breakthrough,” became a huge hit and spent weeks at the top of numerous charts.
Growing Pains, her eighth album, was released in 2008 and helped her complete her hat-trick by topping the Hot R&B/Hip-Hop Songs and Billboard 200 charts. Another CD she published in 2009, titled “My Life II… The Journey Continues (Act 1),” was certified “gold.”

She released her first holiday album, “Mary Christmas,” in 2013, which was far happier than her earlier efforts and went on to get a great deal of critical and popular acclaim.
In 2014, she worked on the soundtrack for the movie “Think like a Man Too” with a few other musicians. Although it was highly received, Mary was very dissatisfied with the producers for not doing much to promote it. One of Mary’s underappreciated performances to date was this one.

The London Sessions, her subsequent album, was then recorded in London by the artist. Two of the album’s tracks quickly reached the top of the Billboard charts. For her album “Strength of a Woman,” she also worked with Kanye West on the single “Love Yourself.” The album was released in April 2017 to a great deal of critical and commercial acclaim.

Mary J. Blige has dabbled in acting in movies. In 2001, she made her musical debut with “Prison Song.” She had previously made an appearance on the sitcom “The Jamie Foxx Show” on television.
She went on to act in movies like “Rock of Ages” and the historical drama “Mudbound.” Mary’s performance in “Mudbound” was widely praised by the critics and garnered her a number of prizes and nominations.

Mary J. Blige has frequently admitted that she has had a difficult personal life, both before and after becoming famous. During the beginning of her career, which she considers to be the darkest time in her life, she turned to drugs and alcohol.
She claimed that when she first met Kendu Isaacs in the early 2000s, he helped her rediscover her love for herself. Despite being hitched in 2003, their union came to an end in 2016 when Mary requested a divorce.

Mary J. Blige, an American singer, songwriter, and producer, has a $20 million fortune. She was named ninth on VH1’s list of the “100 Greatest Women in Music” in 2012 and is generally regarded as an icon in the global music industry and popular culture.