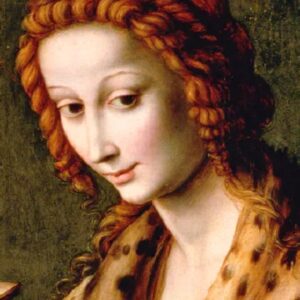 Mary Magdalene, a prominent character in Christianity, is supposed to have seen Jesus be crucified and rise from the dead. She was one of Jesus’ most dedicated disciples who remained faithful to him until the very end and supported him in his final moments as he was being crucified. Her name appears at least 12 times in the four Gospels. John 20 and Mark 16:9 expressly mention her as the first person to see Jesus after his resurrection. She was also the first to find his empty tomb and witness his resurrection. Despite the fact that there is no evidence in the canonical gospels to back up these allegations, Mary Magdalene has been depicted by the Catholic Church for centuries as a penitent prostitute. She was known as the “Apostle to the Apostles” by the orthodox theologian Augustine in the fourth century, and she is recognized as one of Christianity’s most important personalities since she was there at the “beginning of a movement that was going to revolutionize the West.” Although different historians offer different readings of this statement from the Gospel of Luke, it is stated that Jesus cast out seven demons from Mary. Her life has generated a lot of scholarly inquiry and discussion over the years. Although some believed she was a prostitute, the Catholic, Orthodox, Anglican, and Lutheran churches regard her as a saint.

There were many women with the name “Mary” in New Testament times, and the canonical Gospels make mention of several of them. Thus, the various ways that biblical references to the name “Mary” have been interpreted have had a significant impact on how Mary Magdalene is portrayed.

She is suspected of having worked as a hairdresser or in the fish markets. She is also alleged to have been childless and unmarried. She might have been treated suspiciously because she was single, which is why some Christian scholars may have referred to her as a prostitute or a person of questionable morals.

Among all of Jesus Christ’s disciples, Mary Magdalene was one of the most devoted to him. It was once thought that those who engaged in crime were possessed by demons, whilst those who were nice and virtuous were shielded from demonic possession.

Jesus was a well-known exorcist, and according to the Gospel of Luke, he drove seven demons out of Mary (Luke 8:2). Instead of the widely held belief that he absolved her of sins, another interpretation of this information is that he healed her of a physical ailment.

Mary was an incredibly devout disciple who quickly rose to the top of Jesus’ following. According to some sources, Mary was the only one of Jesus’ followers who grasped what he taught and questioned him intelligently while the majority of the other disciples were perplexed.

She was without a doubt one of Jesus’ most beloved disciples, yet the Gospel of Philip contains some passages that are viewed as extremely contentious. The gospel frequently makes reference to Mary Magdalene, and there are several passages that describe Jesus kissing Mary on the lips. While some academics see the kiss from a religious perspective, there is much disagreement on Mary and Jesus’s sexual interactions.

Between the years 30 and 33 AD, most likely, Jesus was arrested, tried, and sentenced by Pontius Pilate to be scourged before being killed. Some of his supporters who had helped in his arrest had betrayed him. One of his most devoted followers, Mary, remained true to him all the way to death.

The four canonical gospels contain accounts of Jesus’ crucifixion. There were numerous women at the crucifixion, some of whom are mentioned in the Gospel of Matthew. At least three of the gospels clearly describe Mary as being present at his crucifixion. She is claimed to have been present for her master’s gruesome final moments and to have stood by him all the way through.

She was one of the women who observed the customary vigil at Jesus’ tomb at the time. Jewish women were responsible for preparing the body for burial.

A witness for Jesus

Mary Magdalene knew the location of Jesus’ grave. She visited the tomb on Easter morning with two other women to anoint the body, according to Mark 15:4. She found the tomb to be empty, though, when she got there!

She went to summon the other disciples after discovering that someone had moved the body of her beloved guru. She came back with Peter, and despite being horrified by what he saw, he walked away silently from Mary. When a voice questioned her why she was so distressed, she broke down in tears.

She initially assumed that the figure speaking to her was the gardener, but as the apparition called her name, she understood that it was actually Jesus who had risen from the grave. She tried to touch him out of overwhelming, but Jesus forbids it. Mary Magdalene was the first person to see the risen Christ, at least according to the Gospels of Mark, Matthew, and John.

Many people disagree and disagree about Mary Magdalene’s relationship with Jesus. She is referred to as the companion of the Lord and one of the three Marys “who always walked with him” (Philip 59.6-11). She is claimed to have received many kisses from the Lord, who adored her more than any other disciple.

While it was common practice in those days to greet one another by kissing, some authors feel that these details cannot be interpreted as evidence of any sexual interaction between Jesus and Mary. Furthermore, it is impossible to infer a love relationship between the two based on the historical data alone.

According to certain sources, Mary Magdalene and St. John the Evangelist were engaged. They were even believed to be wed to one another.

She is rumored to have retreated to a cave near Marseille called La Sainte-Baume in her latter years, where she spent 30 years leading a life of penance. When she passed away, angels transported her to Aix and into Maximinus’ oratory, where she was given the viaticum.