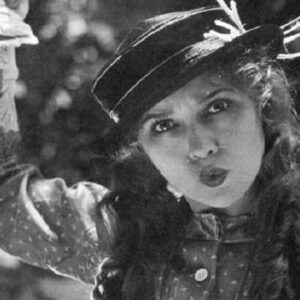 Mary Pickford was a Canadian-American actress who appeared in motion pictures. She began her career as a motion picture extra at D.W. Griffith’s Biograph Studio, where she starred in the director’s film “The Lonely Villa.” She made a permanent transition to film with Adolph Zukor’s Famous Players Company. Her meteoric rise from unknown actor to star with her own production company was due not only to the phenomenal success of her films, but also to her dedication to her craft and her painstaking attention to detail when creating quality entertainment. Her characters’ innocence and sweetness captivated audiences worldwide in films such as “Hearts Adrift” and “Rebecca of Sunnybrook Farm.” She cemented her status as “America’s Sweetheart” with the release of “Tess of the Storm Country.” At one point, she was paid an exorbitant $350,000 per film. With Griffith, Charlie Chaplin, and Douglas Fairbanks, she spearheaded the formation of the United Artists Corporation. In “Pollyanna,” “Little Lord Fauntleroy,” and “Coquette,” her popularity remained unabated (her first talking picture, for which she won an Academy Award for best actress). Her popularity waned with the advent of talkies, and she eventually retired from acting. She married three times and developed an addiction to alcohol. She withdrew from public life in her later years and became a recluse.

Gladys Marie Smith was born Mary Pickford on April 8, 1892 in Toronto, Ontario, to Charlotte Hennessy and John Charles Smith, both of whom worked odd jobs. She had two younger siblings, Jack and Lottie Pickford, both of whom were actors.

Her alcoholic father abandoned his family in 1895 and died of a cerebral hemorrhage three years later. Hennessy began taking in boarders after working as a seamstress throughout the separation.

Gladys was cast in two minor roles, as a boy and a girl, in a production of “The Silver King” at the suggestion of one of the lodgers.

She eventually landed a supporting role in “The Warrens of Virginia,” a 1907 Broadway play. Gladys Smith was forced to adopt the stage name Mary Pickford by the play’s producer.

She made her film debut in D.W. Griffith’s “Her First Biscuits.” In 1909, she signed a contract with the Biograph Company for $10 per day and met her future husband, Owen Moore.

In January 1910, Pickford traveled to Los Angeles with a Biograph crew. Audiences began to associate her with her.

Exhibitors promoted her film with the captions The Girl with the Golden Curls and Blondilocks.

She left Biograph in 1911 and spent the next year earning $175 per week starring in films at Carl Laemmle’s Independent Moving Pictures Company (IMP). “Their First Misunderstanding,” her first IMP short, starred Owen Moore.

In 1912, Pickford re-teamed with Griffith and delivered memorable performances in films such as “Friends,” “The Mender of Nets,” “Just Like a Woman,” and “The Female of the Species.”

She made her final Biograph film, “The New York Hat,” in 1912, and appeared on Broadway in “A Good Little Devil,” but decided to work exclusively in films in the future.

“Caprice,” a silent film produced by Daniel Frohman and Adolph Zukor in 1913, gave her the opportunity to shine as an actress rather than just a popular performer.

Adolph Zukor, the founder of Paramount Pictures, adapted “A Good Little Devil” into a feature film. In 1914, Mary reprised her role as Julia in her first feature-length film.

Pickford signed a new contract with Zukor in 1916 and worked on films such as “The Poor Little Rich Girl,” “Rebecca of Sunnybrook Farm,” and “Daddy-Long-Legs” over the next two years.

“Pollyanna,” a 1920 American melodrama/comedy film, was her United Artists debut. It grossed $1.1 million (the equivalent of ten million dollars today) and is one of her most defining films.

She starred as both Cedric Errol and Widow Errol in “Little Lord Fauntleroy,” a 1921 American film directed by Alfred E. Green and Jack Pickford.

In 1923, her film “Rosita” grossed over $1,000,000 and garnered critical and popular acclaim. Other chart-topping singles such as “Sparrows” and “My Best Girl” followed, but the advent of sound proved to be her undoing.

Her first talkie, “Coquette,” was released in 1929. The film was a box office smash, solidifying Mary Pickford’s reputation as a credible actress. She won her second Academy Award for Best Actress for her performance.

As talkies gained popularity, she found her career dwindling and retired from acting in 1933. She continued to produce films for other filmmakers, including “Sleep,” “My Love,” and “Love Happy.”

She portrayed Tessibel Skinner in the 1914 drama “Tess of the Storm Country.” Pickford’s “career was launched into orbit, and she became the most popular actress in America” as a result of the film.

Pickford co-founded United Artists with D.W. Griffith, Charlie Chaplin, and Douglas Fairbanks in 1919, and she continued to produce, star in, and distribute her own films.

In 1930, she was nominated for an Academy Award for her performance in “Coquette.” Her performance received widespread critical and popular acclaim, and she successfully silenced her critics who accused her of lobbying for the award.

In 1976, she was awarded an Academy Award for her lifetime accomplishments “in recognition of her singular contributions to the film industry and the development of film as an artistic medium.”

Pickford became an American citizen in 1920, following her marriage to Douglas Fairbanks. She expressed a desire toward the end of her life to “die as a Canadian” and was granted dual Canadian-American citizenship.

Pickford became an alcoholic and eventually a recluse after leaving the screen. She died in a Santa Monica hospital a week after suffering a cerebral hemorrhage.

Pickford was posthumously honored with a star on Toronto’s Walk of Fame and was immortalized on a Canadian postage stamp. A collection of her memorabilia was exhibited at the 2011 Toronto International Film Festival.

This Canadian-American actress was ranked No. 24 on The American Film Institute’s list of the 50 Greatest Screen Legends and is portrayed in the film “Chaplin” by Maria Pitillo.

As the first film star to receive a percentage of a film’s earnings, she had to be persuaded not to have all her films destroyed following her death out of fear that no one would care about them.