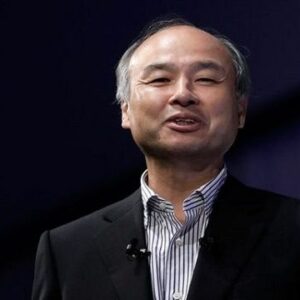 Masayoshi Son is a Japanese entrepreneur and the current chairman of Sprint Corporation. He founded SoftBank, a multinational telecommunications and internet corporation. He is one of Japan’s wealthiest individuals and enjoys celebrity status in the country, with a large Twitter following. Son was up in a second-generation Zainichi Korean family in Japan, where he was hardworking and ambitious. When he moved to the United States for his college education, his entrepreneurial drive was boosted. At the University of California, Berkeley, he studied economics and computer science. During this time, the young man developed an interest in entrepreneurship and, upon his return to Japan, founded Nihon SoftBank, a software distribution company. Within a few years, the company had risen to the top of Japan’s fledgling computer sector, leading him to expand his operations. He was struck by a huge arrow in 2000, when he lost about $70 billion in the dot-com crisis. He rebounded back within a few years, making savvy purchases to re-establish his business. Masayoshi Son is well-known for his astute economic acumen and perseverance, as well as his reputation as a generous philanthropist.

Masayoshi Son was born on August 11, 1957, into a second-generation Zainichi Korean household in Tosu, Saga, Japan. He was enamored with America from an early age, and when he was 16, he travelled to the US for a short-term study abroad program. He subsequently decided to leave Japan and relocate to the United States for a longer period of time.

He graduated from high school and began his studies at Holy Names University. He transferred to the University of California, Berkeley, after two years and studied economics and computer science there.
During this time, he believed that computer technology will eventually revolutionize industry, and that microchips could help him make a fortune. He determined to come up with at least one entrepreneurial concept per day to keep up with this energy. He had over 250 ideas before the end of the year, some of which would turn into big profits in the future. In 1980, he earned a bachelor’s degree in economics.

He founded Unison in Oakland, California, shortly after graduating. Kyocera, a Japanese multinational, bought the company afterwards. In 1981, Son returned to Japan and founded Nihon SoftBank, a software distribution company that was ultimately shortened to SoftBank.

Despite the fact that he had no software to sell, the young entrepreneur was able to get exclusive agreements with both Osaka electronics retailer Joshin and prominent Japanese software company Hudson.
SoftBank quickly rose to the top of Japan’s growing computer sector, capturing over half of the country’s retail market for computer software by 1984.

Son was inspired by the company’s success to branch out into other fields, and he became involved with a phone-routing device, magazine publishing, the Comdex trade fair, and a broadband internet service. His business pursuits, however, were not all successful. In the late 1990s, he lost about a billion dollars on Kingston Technologies.
In the year 2000, he had a significant setback. He lost over $70 billion during the dot-com meltdown, earning the dubious distinction of losing the most money in history. Even such a large loss, however, could not break his spirit, and he worked tirelessly to reclaim his riches.

He put $20 million into Alibaba, a young Chinese e-commerce startup, in 2000. This proved to be a prudent investment, since Alibaba has had spectacular growth over the years, with SoftBank’s stake valued at more than $50 billion at Alibaba’s initial public offering in 2014.

He co-founded Yahoo! BroadBand with Yahoo! Japan in 2001, and he owns a majority stake in the company. Yahoo! BB eventually bought Japan Telecom, the country’s third-largest broadband and landline provider, and is currently the country’s biggest broadband provider.

SoftBank tried for years to break into the burgeoning mobile industry before purchasing Vodafone Japan for about $15 billion in 2006. Despite the fact that Vodafone Japan was on the point of bankruptcy at the time of Son’s purchase, he quickly established himself as a strong player in the Japanese mobile sector. SoftBank Mobile is now Japan’s most lucrative telecommunications company.

He bought a majority stake in Sprint Nextel, an American telecoms holding company, for $22 billion in 2013, making it the largest foreign acquisition by a Japanese business to that point. Sprint is now the United States’ fourth largest wireless network operator.

SoftBank Group Corp., a worldwide telecommunications and Internet business with activities in broadband, fixed-line telecommunications, e-commerce, Internet, technology services, and finance, among other enterprises, was founded by Major Works Son. It was the 62nd largest public corporation in the world according to the Forbes Global 2000 list in 2015.

Masayoshi Son is a philanthropist who is well-known in Japan. He donated roughly 10 billion yen ($120 million) to relief organizations after the 2011 tsunami and the Fukushima Daiichi nuclear accident, and he also offered all of his future salary to help the victims.

He has two children and is married.

Masayoshi Son’s net worth is estimated to be $45billion dollars.