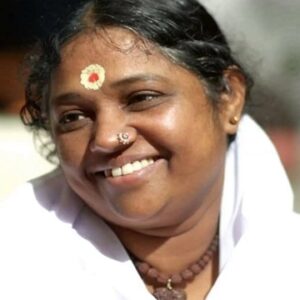 Mata Amritanandamayi, often known as Amma, Ammachi, or Mother, is a world-renowned Hindu spiritual leader. Amma is also known as the “Hugging Saint” since she is famed for hugging and showering unconditional love on people from all walks of life. Sudhamani Idamannel was born in the fishing village of Parayakadavu in the Indian state of Kerala. She barely received four years of formal education. She also didn’t have the opportunity to study the scriptures with a wise teacher. She, on the other hand, spent her childhood and adolescence caring for her family and devoting all of her responsibilities to Lord Krishna, and it was through this selfless act of devotion that she attained the highest knowledge. She attracted serious spiritual searchers quickly, who were drawn to her as much by her spirituality as by her love and compassion. It resulted in the founding and chairpersonship of Mata Amritanandamayi Math by Ammachi. It now has branches in forty countries, where they aim to improve the lives of local people by battling hunger, empowering women, and establishing schools and higher education institutions. More significantly, she continues to lead her children down the correct religious road, teaching them the Vedic teachings in plain English.

Mata Amritanandamayi was born on September 27, 1953, in the coastal village of Parayakadavu, in the Kollam District of Kerala’s Alappad Panchayat. Sudhamani, which means ambrosial pearl, was her given name at birth.
Sugunanandan Idamannel, her father, was a fisherman who supported his family by selling fish.

Sudhamani was the third of seven children born to him and his wife, Damayanti Idamannel. She was amazing from the moment she was born.

Sudhamani is claimed to have been born with a wonderful smile on her face, unlike other children. She later stated that everything seemed familiar to her even at birth. She didn’t cry because she was aware that the world was nothing more than ‘the drama of Consciousness.’

Sudhamani was distinct from the others as time went on, learning to talk and walk at the age of six months. She was devoted to Lord Krishna, presumably their family god, even as a child, and was constantly observed taking His name.

She was frequently singing religious hymns by the age of three, which she must have picked up from his family members or neighbors, pleasing everyone in her vicinity. Her parents felt concerned about her after two years, as her spiritual attitude got increasingly extreme.

She began writing songs to her adored Krishna at the age of five. She began to spend more time in a contemplative state, singing and dancing to her Lord on the beach as time went on. Her parents strongly reprimanded her for her behavior, yet she remained as dedicated as ever.

She began her schooling at the village school at the age of five, but she was not intended for a worldly education. Her mother became ill when she was nine, and despite being a great student, she was pulled out of school to help with home chores.

Sudhamani’s days were now spent cleaning the house, washing the utensils, cooking food, and feeding her family, despite the fact that she was still very young.

She was also in charge of the home cows, and in addition to harvesting grass, she went door to door looking for vegetable peels and rice gruel for them.

Sudhamani led an obviously arduous existence, rising up before dawn and working nonstop till midnight. But in truth, she was content since she was working for her Lord Krishna, not for her family. Furthermore, she would repeat the Lord’s name with each breath.

While she was cooking, she imagined Lord Krishna arriving for his meal. She imagined her Lord will be there soon as she cleaned the courtyard. As a result, no matter where she was or what she was doing, she was constantly flooded with divine thoughts.

While she was grateful for her spiritual experiences, she was troubled by the misery she witnessed in the world. Sudhamani noted that many individuals were hungry or unwell and had no access to food or medicine while collecting vegetable peels. She also seen how their family neglected their elders.

Young as she was, she began to think about the suffering and prayed to her Lord for help. She gradually felt compelled to reach out and assist others in need.

Despite her youth, the mother within her had begun to emerge.
She began donating food and clothing to individuals in need, as well as physically caring for those who had no one to look after them.

Her parents, who were both poor, were unappreciative of her acts of compassion and punished her harshly. However, she continued to serve.
While she spent her days serving others, she spent her evenings in deep meditation. Her spiritual quest became more serious as she approached adolescence. To keep her from going insane, her parents took her to a relative’s house, where she was kept busy with continual work.

When that failed, her parents attempted to marry her off; however, Sudhamani had already planned a separate life for herself and refused to marry. Despite the fact that this enraged her parents and made her a laughingstock, she stood firm in her decisi

Sudhamani had settled into an inner bliss by the time she was in her late teens. Her holiness, however, was carefully disguised at the time. Despite the fact that she sung and danced in ecstasy while experiencing divine love, no one realized her spiritual state until she was 22 years old.

She heard the closing verses of Shrimat Bhagavatam being sung from a neighboring house one day in September 1975 as she was going home with a bundle of grass. She slipped into a trance at the end of it, when the devotees began singing songs in adoration of the Lord.

She dashed inside the house and stood among the worshippers, completely absorbed in Shri Krishna’s thoughts. She instantly assumed the postures of the Lord as she felt one with Him, and bystanders bowed down in respect as they witnessed the holy mood.

She began to identify with Lord Krishna and would frequently enter profound Samadhi as a result. She danced and sung at other times, engaged in ‘Krishna bhava,’ taking care to keep her spiritual experiences hidden from others.

She resolved to give up her body in’samadhi’ one day, wanting to be one with her Lord. But then she heard an inner voice asking her not to do so, and instead to work for others who were living in misery on this planet.
Sudhamani currently spends the majority of her days at her home on the beach.

She gradually gathered a following of followers who came to meet her on the beach. At the same time, a group of young men known as the ‘Rationalists’ began to oppose her.
Sudhamani’s father renovated their cowshed into a suitable room after witnessing the ‘Rationalist’ harassing his daughter. She began to meet her disciples there after that, singing and dancing ecstatically.

She began to see everything around her as her own ‘Atman’ from that day forward. She transformed into ‘Amrita,’ the heavenly nectar, embracing all of humanity as her own self.

Her compassion and love attracted a significant number of devotees who came from all over the world only to spend a few minutes with her. She was more interested in guiding people down the correct path than in alleviating their sorrow with her magical abilities.

Since 1979, she has been receiving increasingly serious spiritual seekers who want to become monks. Balu, a young boy who would later be known as Brahmachari Amritatma Chaitanya, was the first to arrive. They began living in her parents’ home, referring to her as Mata Amritanandamayi.

They built a few thatched huts on that property with Sugunanandan Idamannel’s consent in 1981. The Mata Amritanandamayi Math, as it is currently known, was founded on this foundation (MAM).

Her celebrity grew over time, and in 1986, she informed a group of people that she had children all over the world who were sobbing for her. She went to California the following year on Kusuma Gretchen Venkatesh’s invitation. This was her first trip outside of the country.

She initiated Brahmachari Amritatma Chaitanya into’sanyasa’ in 1989, and gave him the sanyasa name Swami Amritaswarupananda Puri. She expressed her joy at being able to dedicate her son to the service of the world in her address to the assembled devotees on that day.

She has now introduced many more people into the holy order of’sanyasa,’ committing them to the benefit of humanity. At the same time, she remained ‘Ammachi’ to millions of people around the world.

Anyone who pays her a visit is always greeted with a loving hug. It began when, out of compassion, she held a devout follower who, burdened by severe adversity, sobbed on her lap.

As a result of this, others wanted to be hugged as well, and the practice was formed. She is known as the “Hugging Saint” since she has hugged over 33 million individuals all around the world.

In the Service of Humanity

Mata Amritanandamayi thinks that a seeker must practice devotion (bhakti), action (karma), and knowledge (jnana) in order to achieve ultimate joy, much as a bird needs two wings and a tail to fly. As a result, she dedicated her pupils to the service of humanity, in addition to meditation and bhajana.

In 1997, she established Amrita Kuteeram, a housing program with the goal of constructing 25,000 homes for the destitute across India. They continued to develop more residences across India after the initial aim was met in 2002.

She founded Amrita Nidhi in 1998, a program that gives a monthly stipend to 50,000 physically and intellectually handicapped people, as well as widows. At her initiative, the Amrita Institute of Medical Sciences (AIMS) or ‘Amrita Hospital’ opened in Kochi the next year.

Since 2001, the math has been dispatching volunteers and other resources whenever natural catastrophes or other types of calamities occur.

Amma is especially concerned about rural India’s lack of sanitation and cleanliness. Her company has been cleaning the Pampa River and the Sabarimala Temple pilgrimage site every year since 2012.

She gave the Indian government USD15 million in 2015 to build toilets for needy communities living along the Ganges River’s banks. In the same year, she donated an additional USD 15 million for the construction of toilets in Kerala.

Amma has garnered numerous honors from both national and international organizations over the years. Hinduism Today’s Hindu Renaissance Award (1993) and The World Movement for Nonviolence’s Gandhi-King Award for Nonviolence are among the most prestigious (UN, Geneva, 2002).

The Parliament of the World’s Religions in Chicago chose Mata Amritanandamayi as “President of the Hindu Faith” in 1993.

Ammachi received an honorary doctorate from the State University of New York in 2010.
Mata Amritanandamayi was named one of the top 100 spiritually significant living individuals in the world by Watkins in 2012.

In 2014, she was named to The Huffington Post’s list of the 50 most powerful women religious leaders in the United States.

Mata Amritanandamayi has a net worth of $ 210 million as of 2022, making her one of India’s wealthiest religious gurus. In Indian Rupees, this equates to Rs 1875 crores.