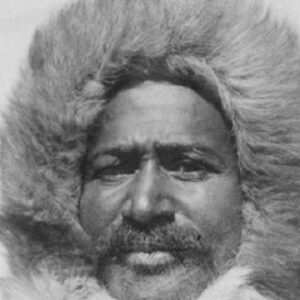 Matthew Henson was an African-American explorer who traveled to Greenland with legendary American explorer Robert Peary in 1909, becoming the first African-American to reach the Geographic North Pole. Henson and Peary had gone on multiple expeditions together before the 1909 expedition, but it was the 1909 expedition that cemented their international recognition and propelled them to international prominence. Their claim to being the first persons to reach the North Pole has been disputed, but it hasn’t stopped them from receiving international recognition for their accomplishments. Henson was orphaned at a young age and placed in the care of relatives as the son of two freeborn black sharecroppers. As a young lad, he ran away from home and found work as a cabin boy aboard a ship. He was taught by the ship’s captain for the following few years, who took him on multiple excursions and instilled in him a passion for adventure. Years later, he met Robert Peary, who informed him of his exploration ambitions and offered Henson the position of valet on his Nicaraguan surveying trip. Henson proved to be a capable traveling companion, and Peary was so impressed with his qualities that he made him an associate for future expeditions.

Matthew Alexander Henson was born in Maryland on August 8, 1866. His parents were sharecroppers who were free persons of color. He was the youngest of three sisters. When he was two years old, his mother died, and his father remarried and had more children. Unfortunately, Matthew’s father died when he was still a child. He was orphaned and moved in with relatives. He was cared for by his uncle for a few years, but he died not long after.

He was left to fend for himself and found work as a cabin boy on the merchant ship Katie Hines. Childs, the ship’s captain, took Matthew under his wing. He raised him as a son, teaching him to read and write. They became fast friends and sailed across the world together, stopping in Japan, China, France, Africa, and the Philippines. As a result of his international travels, Matthew has developed into a good navigator.

After his mentor Childs died in 1883, Henson worked as a seaman for a while until landing a job as a clerk at B.H.Stinemetz and Sons, a clothes business in Washington, D.C. He met Commander Robert Edwin Peary, an explorer and officer in the United States Navy Corps of Civil Engineers, in November 1887. Peary was seeking for an attendant to accompany him on future voyages, and when he heard of Henson’s maritime adventures, he engaged him as a valet right away.

In 1888, Henson joined Peary on his journey and surveying expedition to Nicaragua, where Peary oversaw 45 engineers working on the canal survey. On that journey, Henson proved to be a good seaman, and Peary was so impressed with him that he hired him as a coworker. Peary and Henson set out on a Greenland expedition in 1891. It was a difficult journey, and some members of the crew dropped out long before the journey was completed. Henson learned about the local Eskimo culture as well as the Indians’ Arctic survival skills during this expedition.

In 1895, they embarked on a second expedition to Greenland. The two planned to map the entire ice cap this time. This expedition proved to be extremely challenging, as the party came dangerously close to hunger at one point, forcing them to slaughter and eat their sled dogs. They eventually made it home after surviving the ordeal.
The fact that they were unable to reach the North Pole further fueled their drive. Peary and Henson tried multiple times over the next few years to reach the illusive North Pole. Six of their Eskimo team members died during one of their attempts in 1902, which ended in tragedy.

Their explorations were attracting national attention by the early 1900s. They set out again in 1906, this time with the support of President Theodore Roosevelt. They were now armed with a sophisticated warship capable of cutting through ice. They came within 174 miles of the North Pole, the closest they had ever been to their target. The operation, however, was unable to be accomplished due to bad weather circumstances.

The two prepared successfully for their upcoming excursion in 1908-09, buoyed by their progress on the 1906 tour. On this voyage, Peary and Henson were joined by 22 Inuit men, 17 Inuit women, 10 children, and 246 dogs. They also brought many tons of beef with them.

This trek proved to be extremely tough, and numerous people and dogs perished throughout the journey. Several of the travelers decided to end their journey and return home due to the increasingly hostile terrain. Peary, Henson, four Eskimos, and 40 dogs arrived at the North Pole on April 6, 1909.

The soldiers were greeted warmly upon their return home following the success of their mission, while many questioned their claim to have reached the North Pole. Despite this, Peary was lauded as a hero and lavished with honors. Henson, on the other hand, was mostly overlooked because he was African-American. In 1912, Matthew Henson released ‘A Negro Explorer at the North Pole,’ a book of his polar expeditions. President William Howard Taft appointed Henson as a clerk in the United States Customs House in New York City the following year, a position he retained until his retirement in 1936.

Matthew Henson is most known for serving as an aide to explorer Robert Peary on multiple arctic expeditions, including the famous 1909 mission to Greenland, during which they became the first to reach the Geographic North Pole.

Henson was the first African American to be admitted to The Explorers Club in 1937, and he was later awarded an honorary member in 1948. Matthew Henson was posthumously awarded the Hubbard Medal by the National Geographic Society in 2000. Audrey Mebane, Henson’s great-niece, received the medal. A scholarship in Henson’s honor was also established by the society.

In the year 1891, Henson married Eva Flint. Due to his extended absences from home, their marriage became strained and ended in divorce in 1897. In the year 1906, he married Lucy Ross. During his journeys, he had relationships with Inuit women and fathered a son named Anauakaq with a lady named Akatingwah in 1906. He was not involved in his son’s upbringing in any way. Henson died on March 9, 1955, at the age of 88, in New York City and was interred in Woodlawn Cemetery.

Matthew is one of the wealthiest explorers and one of the most popular. Matthew Henson’s net worth is estimated to be $1.5 million, according to Wikipedia, Forbes, and Business Insider.