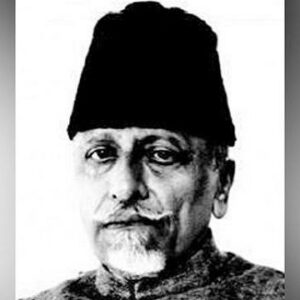 In modern India, Maulana Abul Kalam Azad was the face of communal unity. He had a captivating presence from the start, as a recognized academic and active political leader. He put up his clergyman career to serve in the Indian independence movement because his desire to engage in the national war for independence was so strong. Gandhi had a tremendous influence on Azad, and he was a strong supporter of Gandhi’s nonviolence, civil disobedience, and non-cooperation movements. Unlike other Muslim leaders, he criticized the communal separation promoted by Muhammad Ali Jinnah and other Muslim leaders, emphasizing the value of national freedom over communal freedom. He advocated for religious unity and was a vocal critic of the partition. Not only did he live long enough to witness India’s independence and subsequent partition, but he also served as the country’s first Minister of Education.

Azad was born into a family of prominent Islamic scholars, thus learning and writing came naturally to him. He began learning multiple languages at a young age, including Urdu, Hindi, Persian, Bengali, English, and Arabic. Hanbali fiqh, shariat, mathematics, philosophy, world history, and science were all taught to him.
He was a good student who possessed a strong propensity for learning, which enabled him to keep ahead of his peers. He published multiple journals at a young age, served as editor of the weekly Al-Misbah, and reinterpreted the holy Quran, Hadith, and Fiqh and Kalam principles.

He formed extreme political beliefs that were in line with the Indian nationalism movement during this time. He was skeptical of the British Raj and Muslim communal issues, believing that national freedom was more vital.
His travels to Afghanistan, Iraq, Egypt, Syria, and Turkey changed his mind and transformed him into a revolutionary nationalist. When he returned to India, he was influenced by notable Hindu revolutionaries Sri Aurobindo and Shyam Sundar Chakravarty, and he became involved in the national liberation war.
He opposed the partition of Bengal and rejected the All India Muslim League’s call for communal secession, unlike other Muslim activists. He was against the racial discrimination that the Indian people were subjected to.

Despite his training as a pastor, he chose to serve alongside Hindu revolutionaries in the independence war rather than pursue clerical duties. He emphasized the radical activities that were concentrated in Bengal and Bihar by spreading them throughout North India and Bombay over time.

In 1912, he founded Al-Hilal, an Urdu weekly journal in which he publicly criticised British policy and wrote passionately about Indian nationalism. The newspaper grew become a revolutionary mouthpiece, spreading the ideals and viewpoints of extremists.

Surprisingly, the schism that had developed between Hindus and Muslims as a result of the problem of separate communal electorates was mended as Al-Hilal enhanced Hindu-Muslim relations and pushed young to struggle for independence and Hindu-Muslim unity.

Al Hilal was outlawed in 1914, when censorship was tightened as a result of the adoption of the Press Act. He subsequently founded Al Balagh, a new publication that followed in the footsteps of Al Hilal in vigorously promoting nationalist causes and community solidarity.

Because of the threat posed by Al Balagh, the newspaper was eventually banned under the Defence of India Regulations Act. He was apprehended and detained in Ranchi, where he remained until January 1, 1920.
When he was released, the political scene in the country was engulfed in outrage and insurrection, as people despised British policies that limited civil liberties and individual rights. He enraged the Muslim community even more by working closely with the Khilafat movement.

He joined the Gandhi-led Indian National Congress in the Non-Cooperation Movement, asking people to boycott everything British, including schools, government offices, and clothing, as well as commodities and services.
He was the president of the All India Khilafat Committee, which he was elected to. He built the Jamia Millia Islamia institution in Delhi with other Khilafat activists.
He underwent a dramatic transition in his own life after being inspired by Gandhi and the Prophet Muhammad’s life ideals. He worked on Gandhi’s agenda and was profoundly committed to ahimsa.

He was elected President of the Congress in 1923, making him the youngest man ever to hold the position. The next year, he presided over the Delhi Unity Conference, which sought to reconcile the disputes between the Khilafat and the Swarajists.
He was a prominent national leader in the Indian Congress, serving on the Congress Working Committee and holding the positions of president and general secretary on several occasions. He traveled widely throughout India, espousing Gandhi’s concept of social reform and the Gandhian worldview.

In 1928, he backed Motilal Nehru’s report suggesting constitutional amendments based on Indian perspectives, much to the chagrin of Muslim league leaders. He opposed Muhammad Ali Jinnah’s proposal for a separate electorate and instead advocated for a secular India free of sectarian divisions.

In 1930, he and several other leaders were jailed for breaking the salt ban as part of Gandhi’s Salt Satyagraha. He was imprisoned at Meerut. He was liberated in 1934, following the Gandhi-Irwin Pact.
He assisted in the organization of the election under the Government of India Act the following year. He did not run in the 1937 elections due to the large number of un-elected lawmakers in the central legislature.

Over the years, he has harshly criticized Muhammad Ali Jinnah and his colleagues for referring to the Congress’ authority as Hindu Raj. They raised their voices in protest and demanded that the Congress ministries quit.
In the Ramgarh session in 1940, he was elected as the Congress president at the dawn of Muslim movements, which campaigned for the creation of a distinct Muslim state. He chastised and condemned religious separatism, emphasizing the importance of maintaining India’s unity. He was in charge of the job until 1946.
Meanwhile, he and other Congress leaders were detained by the British in 1942 as a result of their call for a Quit India Movement. He was imprisoned for four years at the Ahmednagar Fort, where he was kept in strict isolation.
All political prisoners were liberated at the dawn of Indian independence, including him. Following that, he led the Congress in the elections for India’s new Constituent Assembly.

Despite being a vocal opponent, he was instrumental in ensuring the security of Muslims in India during the partition. He went on a tour of the violence-plagued areas of Bengal, Bihar, Punjab, and Assam, assisting in the establishment of refugee camps, as well as providing food and protection.
From 1947 to 1958, he served as India’s first Minister of Education under Nehru’s cabinet. In his profile, he emphasized the need of providing free and compulsory education for all children under the age of 14, as well as adult illiteracy, secondary education development, and the value of teaching the poor and women.
He put a strong emphasis on scientific education, establishing a number of universities and advocating for research and higher education institutions. The first IIT, IISc, and the University Grants Commission were created during his ministerial tenure.

In 1992, he was posthumously awarded the prestigious Bharat Ratna—highest India’s civilian award—for his unsurpassed commitment as a nationalist revolutionary and his unwavering support for a vision of a united and liberated India.

He married Zulaikha Begum at the tender age of thirteen, as was the typical norm at the time.
Due to a stroke, he passed away on February 22, 1958.

In modern India, Maulana Abul Kalam Azad was the face of communal unity. Despite being a Muslim, he was opposed to Muhammmad Jinnah’s views and passionately opposed communal secession.
On the occasion of his birth anniversary in 1989, the Indian government established the Maulana Azad Education Foundation to encourage education among the socially disadvantaged. In India, his birthday is commemorated as National Education Day every year.

In India, he has a number of schools, universities, and institutions named after him. He is regarded as one of Jamia Milia Islamia University’s founders and greatest sponsors.

Despite his birth name was Abul Kalam, he is best known as Maulana Abul Kalam Azad, with ‘Maulana’ being the honorific title bestowed upon him and ‘Azad’ being the pen name he adopted.

He is best known by the name Maulana Abul Kalam Azad, however this was not his birth name.
Muhammad Ali Jinnah and other Muslim leaders were outraged by this Muslim leader’s contradictory views on communal separation, mocking him as ‘Muslim Lord Haw-haw’ and ‘Congress Showboy.’
This outstanding leader was born on the same day as Acharya Kripalani, another important liberation warrior. Furthermore, at the Meerut session, Kripalani succeeded him as President of the Indian National Congress.

Abul Kalam Azad is one of the wealthiest politicians and one of the most well-known. Abul Kalam Azad’s net worth is estimated to be $1.5 million, according to Wikipedia, Forbes, and Business Insider.