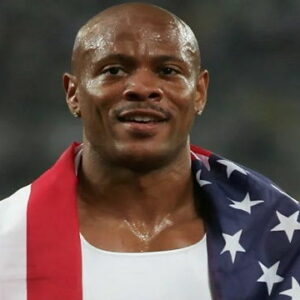 Maurice Greene is a well-known American sprinter who competed in the Olympics. He is a two-time Olympic gold medalist in the 100m and 200m dashes. From 1997 to 2004, he was at the pinnacle of his athletic career, setting the world mark for the 100m in 9.79 seconds, which was later exceeded. Over the years, he has attained remarkable heights, winning four Olympic medals, including two gold, one silver, and one bronze. He won five World Championships, including three in the 100m (1997, 1999, 2001), one in the 200m (1999), and one in the 4100 m relay (1999). (1999). During the 1999 World Championships in Athletics, he won three gold medals, a feat previously accomplished by only two competitors, Michael Johnson and Carl Lewis, and afterwards equaled by three more sprinters. He also won the Indoor World Championships in 1999 and twice set the indoor 60-meter sprint record. His current indoor 60m record is 6.39 seconds. He is still the only athlete to hold both the 100m and 60m world records at the same time. He also won two gold medals at the Goodwill Games in New York City in 1998 (one in the 100m and one in the 4100 m relay). Following a series of injuries that began to damage his career, he announced his retirement in 2008. Following his retirement, Greene became an ambassador for the International Association of Athletics Federations (IAAF). He also began a career in television, appearing on shows such as ‘Dancing with the Stars,’ ‘Blind Date,’ and ‘Identity.’ He volunteered as a track coach at the ‘University of California in Los Angeles’ (‘UCLA’) during the 2012-2013 season.

A Career of Maurice Greene

In 1995, he competed in his first major international competition, the IAAF World Championships in Athletics in Gothenburg, Sweden. In the 100m, he may make it to the quarterfinals.
The following season was likewise not promising for him, as he was unable to join the American team for the 1996 Summer Olympics in Atlanta.

After that, he moved to Los Angeles to train with John Walton Smith, a former ‘UCLA’ coach, and joined the premier track and field training organization ‘Hudson Smith International’ (HIS). He gradually rose to prominence as the group’s most visible athlete.

He won the 100m championship in the World Championships in Athens, Greece, the following season (1997), his first gold medal of his career. This was also his first appearance in the 100m dash.

He won a gold medal in the 100 meters and another in the 4100 meter relay at the 1998 Goodwill Games in New York City.
He was at the pinnacle of his career in 1999, which appeared to be a banner year for him. In March of that year, he won gold in the 60m sprint at the 7th IAAF World Indoor Championships in Maebashi, Japan. In August of that year, he won the 100m dash at the 7th World Championships in Athletics in Seville, Spain.

Although another American sprinter, Tim Montgomery, achieved a new world record of 9.78 seconds +2.0 meters per second in 2002, the latter’s record was eventually nullified due to his usage of performance-enhancing medications. In 2005, Jamaican sprinter Asafa Powell broke Greene’s record with a time of 9.77 seconds (+1.6 m/s wind).

In the 2000 Olympics in Sydney, Australia, he won two gold medals, the first in the 100m sprint and the second in the men’s 4100 m relay. He was unable to compete in the 200m dash owing to an injury sustained during the US trials.

His most recent gold medal came in the 100m sprint at the 8th World Championships in Athletics, which took place in Edmonton, Alberta, Canada in August 2001.

On December 21, 2006, he appeared as Stranger #10 on the NBC reality/game show ‘Identity.’
His ailments prompted him to skip races, and when in Beijing, he received a call on February 4, 2008, announcing his retirement from track and field.

Following his retirement from track and field, Greene featured on a number of television shows. In its seventh season, he competed in the American dancing competition show ‘Dancing with the Stars,’ teaming up with American dancer, model, and TV host Cheryl Burke, a two-time winner of the competition. The show is broadcast on ABC in the United States and CTV/CTV Two in Canada. He also appeared on ‘Blind Date,’ an American dating game program.

He currently hosts the monthly show ‘Greene Light,’ which airs on Eurosport. The show featured prominent athletes such as Churandy Martina, Allyson Felix, and Blanka Vlai.

He has a daughter named Ryan Alexandria, yet nothing is known about his personal life.
He is now dating Claudia Jordan, an American actress, model, and radio and reality television personality.

His ‘GOAT’ tattoo on his body refers to his claim to be the ‘Greatest of All Time.’