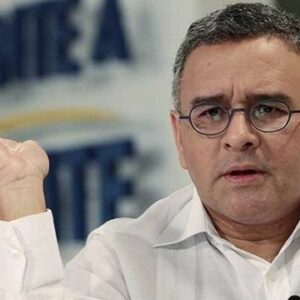 Mauricio Funes is a Salvadoran politician who served as the country’s president. He is a member of the left-wing socialist ‘Farabundo Mart National Liberation Front’ (FMLN). He studied communications in high school, with an emphasis on the audiovisual aspect, but dropped out of university before completing his degree when his eldest brother was killed in the Salvadoran Civil War. Funes began his career as a popular television reporter and personality after graduating from high school, covering political events for several Spanish-language channels broadcast in El Salvador and internationally. He developed his left-leaning philosophies during this time and began using his position as a television reporter to criticize the right-wing political party in power. Despite severe censorship and other opposition, he maintained a steady increase in popularity as a result of his outspoken support for the working class. He ran for president and defeated the incumbent right-winger, peacefully assuming control of the government in a political system notorious for violent power struggles. Throughout his presidency, Funes implemented policies that resulted in numerous social and economic reforms, including improved public health care and a lower crime rate. He did not, however, succeed in enacting his plans in a divided legislature, and his term ended amid strong allegations of corruption and deception.

Mauricio Funes was born in El Salvador on October 18, 1959. He attended a Jesuit elementary school before enrolling in the ‘Jesuit Universidad Centroamericana de José SimeónCaas’ to study communications (UCA). His Jesuit Catholic upbringing and education from leftist professors laid the groundwork for his political philosophies.
Funes’ older brother was killed by police in August 1980 during a student protest that devolved into violence. This tragedy compelled him to abandon his university studies prior to completing his degree.

Despite his leftist leanings, Funes did not immediately join a political party or become involved in his country’s ongoing civil war after completing his university education. Rather than that, he began teaching literature in Catholic schools, focusing on the audio-visual aspects of communication.

Funes began his career in television journalism in 1986 as a reporter for the state education channel. He moved to ‘Channel 12’ shortly thereafter, an independently owned network known for its news coverage. He interviewed numerous prominent Salvadoran political figures during his tenure as a reporter for ‘Channel 12’ and became well-known for his support of leftist and working-class causes.

In 1991, Funes collaborated with a former university sociology professor, a leftist activist named Francis Miguel Hasbn, to establish an audiovisual center and radio station at the UCA. During this time period, he reported for ‘Channel 12’ and was also a prominent Spanish-language correspondent for the ‘Cable News Network’, and his popularity as a leftist celebrity continued to grow.

Although Funes’ leftist coverage of Salvadoran politics won him widespread popular support, he enraged the right wing ‘National Republican Alliance’ (ARENA), which was in power at the time. He faced severe censorship and even received death threats.

He was fired from ‘Channel 12’ in 2005, along with several other journalists. He continued to appear on other channels as a journalist, and his popularity grew.

In 2007, Funes used his popularity as a leftist activist and journalist to run for President of the ‘Farabundo Mart National Liberation Front’ (FMLN), a political party that began as a Marxist guerrilla group. He was their first non-guerrilla candidate in more than a quarter-century.

Throughout his lengthy electoral campaign, Funes battled the incumbent ARENA party and campaigned on a platform of social justice for the working class. His platform was built on economic reform, universal health care, increased access to housing and education, and policies to combat gang violence and crime.

He was elected with 51.3 percent of the vote on March 15, 2009. His inauguration marked the third time in his country’s history that power peacefully shifted from one ruling party to the opposition.

Despite his campaign claims that he was neither Marxist nor socialist, one of his first acts as president was to sanction $600 million for a plan aimed at assisting impoverished Salvadorans that included massive social reform policies. He also reestablished diplomatic relations with Cuba after a 50-year hiatus.

Funes presided over a reconciliatory administration that sought to acknowledge and atone for human rights violations committed during the Salvadoran Civil War, which claimed the life of his own brother. Throughout his term, he worked to reduce his country’s homicide rate, oversee health care reform, and maintain positive business relations with other countries, particularly the United States.

Despite initial success, his political party lost its majority in the 84-member legislature in 2012, effectively eliminating his ability to enact or enforce his policies. El Salvador’s crime rate and poverty continued to drive the country’s indigenous population out, and he ended his five-year term amid corruption allegations and a constitutional challenge.

Funes was tasked with responding to the devastation caused by ‘Hurricane Ida’ in 2009, as well as earthquakes and volcanoes in the area, during his first year in office.

His administration’s efforts included the rehabilitation of public schools and the establishment of temporary housing for refugees for more than three months while entire communities were rebuilt or relocated.

In 1994, ‘Columbia University’ awarded him the ‘Maria Moors Cabot’ prize. The award was given in recognition of his work promoting and empowering the press.

His wife is Wanda Pignato, a former member of Brazil’s ‘Worker’s Party. Alejandro Funes Velasco, his eldest son, was assassinated in Paris at the age of 27 while studying photography.

The estimated net worth of Mauricio Funes is unknown.

This well-known politician credits his years as a reporter with helping him develop his left-leaning philosophies. He interviewed numerous political leaders during that time period, including members of the party he would later join.