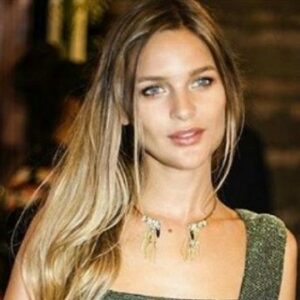 Model and actress Mayte Rodriguez hail from Chile. At the tender age of 12, she made her television debut in 2005 as a member of the youthful cast of “Msica Libre,” a well-liked TV show on “Canal 13” (also known as “Channel 13”. She soon had an appearance in three episodes of the Chilean show “BKN.” After making a comeback to the entertainment industry in 2010 with the TV show “Feroz,” where she was a regular cast member, she received her first starring part in “Infiltradas.” On the sets of “Infiltradas,” Mayte first met her lover at the time, Tiago Correa. After dating Tiago for five years, she broke up with him soon after, and soon after that, she began seeing her current partner, Chilean professional player Alexis Sánchez. Rodriguez, who was previously known for keeping her relationship with Sánchez a secret, shocked both the media and her admirers by admitting that she would do anything—even things that seemed impossible—for love. She is a well-known figure in her home country, where she has amassed over 629,000 followers on the photo-sharing app “Instagram,” thanks to her roles in well-liked Chilean TV programs like “La Sexologa” and “Socias.” She has additionally acted in a number of Spanish films and commercials for fashion accessories and automobile manufacturers.

On January 25, 1989, Mayte Rodriguez was born Mayte Andrea Rodrguez Arregui in Santiago, the nation’s capital. Like Mayte, her mother, Carolina Arregui, performs in TV series in Chile. Several financially lucrative Chilean telenovelas have been credited to her father, Carlos Rodrguez Gingins, as their director. Scar Rodrguez and Miguel Angel Rodrguez are her two brothers.

Mayte, the youngest of her parents’ three children, has always wanted to work in the entertainment business, like her mother.

She began her television career as a young child in 2005 with “Msica Libre,” a Chilean music-based TV program that was the first broadcast by “TVN” and later carried by numerous other TV networks. A group of young dancers performed and danced to then-current hits as part of the program.

She was chosen to play Carmen Ramrez in “Feroz,” a Chilean telenovela with a werewolf theme, in 2010. “Feroz” used Santiago as the backdrop for a thriller and fantasy story. She became very well-known in her home country as a result of her TV acting performances as a youngster, and by the time she was an adult, she had no trouble finding good roles.

In 2011, the television network “Chilevision” offered Mayte Rodriguez her big break as the leading lady in the TV show “Infiltradas.” She started a committed relationship with Chilean actor and “Infiltradas” co-star Tiago Correa while filming this series. In 2011, Mayte also made an appearance in television ads for “Americanino” and “Falabella.”

She appeared in a supporting role in the romantic comedy “La Sexologa” (also known as “The Sexologist”) in November 2012. She appeared on the show along with her ex-boyfriend Tiago.
In the 2014 episode of the Chilean network “TVN” soap opera “Caleta de Sol,” Rodrguez played “Chef Barbara Hidalgo,” a co-protagonist. She has appeared in supporting roles in TV shows including “Socias,” “Un Diablo with ngel,” and “Dime quién fue,” among others.

With the 2015 drama “Distancia,” Mayte made her film debut. It is a coming-of-age Spanish drama about a man who, after experiencing difficulties in his professional life, returns to his birthplace and learns how to handle frustration. In the film, Rodriguez played a blink-and-miss character.
She has had important roles in the films “Reverso” (2015), “Malas costumbres” (2016), and “American Huaso” (2016).

Tiago Correa and Mayte Rodriguez began dating in 2011, and they dated for five years until splitting up in 2016.

She started dating Sánchez, a Chilean professional football player who plays for the English club “Manchester United” and the Chile national team, in 2017, just a short time after her romance with Tiago ended. Mayte admitted to a magazine that she had met Alexis at a BBQ but that they had not started dating right away. Rodriguez and Sanchez became friends over their shared love of dogs.

Football supporters in Chile complained about the couple’s relationship in September 2017, claiming that it had made Sánchez obese and lethargic, which had hurt his performance with the national team.

The “March so that Alexis finishes it with Mayte and returns to his level to reach the 2018 World Cup in Russia” Facebook event was established by one of his supporters. Even though there was a lot of buzz about the event on “Facebook,” only five supporters showed out for the march itself.

Some tabloids’ claims that Sanchez had cheated on Rodrguez and had fathered an illegitimate son only made matters worse. Rodrguez refuted the claims.

Student Paulina Sobierajska, 20, said that Sánchez had offered her £1,000 for sex and had taken her to his flat four times at the beginning of 2018.

Despite his criticism of the media for trying to damage his reputation and his insistence that the rumors were untrue, rumors continued to circulate. Despite public allegations that Sánchez had committed adultery, Rodrguez is still involved with him.

Additionally, Mayte has had romantic relationships in the past with Juan Falcón and Residente.

Mayte has amassed a sizable fortune through her professional acting career. She is thought to be worth $40 million as of 2022.