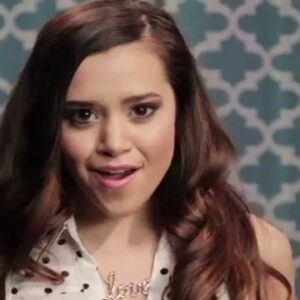 Megan Nicole is a YouTube sensation who rose to success as a singer, songwriter, actress, and musician in the United States. She loved music even though she had no intention of becoming a musician when she was younger. Her passion for music blossomed in her teenage years, when she learnt to play a variety of instruments and joined the choir. She ultimately told her parents that she wanted to be a musician after she started creating songs. She began by posting cover versions of popular songs before collaborating with other YouTube celebrities. She eventually started uploading original music to her YouTube page. She’s previously published a five-song EP called ‘Escape,’ and she wrote, directed, and starred in the feature film ‘Summer Forever.’ She was named one of the top 50 music artists on YouTube by Billboard and was featured on the ‘Billboard Social 50’ chart. She has traveled the United States and performed live at several venues. She used to be a shy youngster who was terrified to perform in front of an audience, but now she dreams of touring the world and bringing her music to millions of people.

Megan Nicole Flores was born in Katy, Texas, on September 1, 1993, to Frankie and Tammy Flores. Madison, her younger sister, is her only sibling.

When she was ten years old, her father purchased her a karaoke machine, and she discovered her passion for music. She also began to learn to play the piano at this time.

She adored singing in the choir in middle school. She learned to play the guitar in her freshman year and joined the Katy Community Fellowship church band.

Her parents used to take her to late-night open-mic gatherings in the neighborhood after school.
Her hometown’s Katy High School was her alma mater. However, due to time constraints, she had to drop out of school and began homeschooling after becoming more active in her singing career.

Megan Nicole launched her YouTube page in December 2009, with her first video being a cover of Kings of Leon’s “Use Somebody.” She began posting cover versions of popular songs by singers such as Bruno Mars, Katy Perry,

Lorde, Rihanna, Taylor Swift, and Selena Gomez shortly after. With over 66 million views, her cover of Bruno Mars’ “The Lazy Song” is the most popular video on her YouTube channel.

Lairs Johnston, a songwriter and producer located in Los Angeles, became interested in collaborating with her after watching her videos in 2010. He assisted her in the creation of a huge number of songs and videos as her manager, working with key people in the music industry.

‘B-e-a-utiful,’ her debut original music video, was released on July 15, 2011. Nicole co-wrote the song with Lairs Johnston, Stephen Folden, and Tom Mgrdichian, and it received one million views in just two days.

In August 2012, she signed her first major record deal with the American company ‘Bad Boy Records.’ Sean “Diddy” Combs, the label’s founder, referred to her as a “full package.”

She finished her fourth week at number 29 on the ‘Billboard Social 50’ popularity chart in September 2012. She began working on her debut album and her first US tour soon after.

‘Summer Forever,’ a new original song, was released on May 27, 2013. With its laid-back atmosphere, the song became her youthful admirers’ summer anthem.

She performed at the ‘Radio Disney Music Awards’ ‘Pre-Show Party’ in 2014. She later quit ‘Bad Boy Records’ and launched her own label, Hume Records, to release her first EP.

She played alongside Alyson Stoner, Anna Grace Barlow, and Ryan McCartan in the musical film ‘Summer Forever’ in September 2015. The film was based on her 2013 single of the same name, which was released via video on demand.

Her YouTube channel has now been updated with a lot of covers, original songs, and music videos. On September 15, 2016, she released her newest single, ‘Play It Cool,’ which she wrote herself.

Megan Nicole’s debut EP, ‘Escape,’ solidified her position as a singer, which she had already established thanks to her YouTube fame. This EP featured the hugely popular single ‘Fun,’ which has had over 22 million views on YouTube.

‘Summer Forever’ is one of her most well-known pieces to date. On the same day as the film, the official soundtrack was also released. Her singing abilities as well as her acting abilities were featured in the film.

Megan Nicole was named one of the top 50 musicians and musical acts on the ‘YouTube Music Awards’ in 2015, alongside Ariana Grande, Taylor Swift, and One Direction. During the ceremony, she also performed her song “Escape.”

She is currently one of YouTube’s most popular musicians. Her YouTube account has over 3.89 million subscribers and her videos have received over 792 million views.

Megan Nicole has been a resident of Los Angeles for some years. Her parents are always there for her, encouraging her to pursue her aspirations. When she goes to studios to record songs and videos, she is always accompanied by one of her parents.

Megan net worth is believed to be $4 million, according to the most recent data.

Megan Nicole named her first guitar, which her father gave her as a Christmas present, ‘Pawn Shop,’ after the pawnshop where she got it. She eventually swapped it in for another, which she uses in her debut YouTube video to perform with.
When she was younger, she was really bashful. She was even apprehensive about playing the piano in front of others. She overcame her phobia of performing in front of an audience by singing in open mic performances.