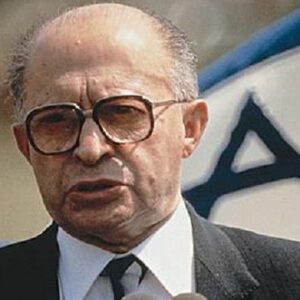 Menachem Begin focused early on his life’s central objective as the young son of active Zionists in early twentieth-century Poland (then Tsarist Russia). As a law student, he was active in groups that sought to advance the Jewish cause in the eyes of the world and to defend Jews against widespread discrimination throughout Europe. Begin faced and survived severe persecution throughout his life from groups that included the Nazis in Germany, the Communists in the Soviet Union, and Islamic foes in the Middle East. He eventually became a major player on the world stage after overcoming incredible obstacles. At times, he needed to act as a broker of peace. At other times, he required the ruthlessness of a war maker. However, his tenacious commitment to the survival of his dream, the free Jewish State of Israel, was his driving passion almost from birth to death. Depending on one’s perspective, he has been lauded as a hero or demonized. Begin’s entire career as a Jewish leader was guided solely by his lifelong commitment, and he never wavered in his mission. Menachem Begin was named the fourth most influential person in Israel’s history twenty-three years after his death.

Menachem was born August 16, 1913, in Brisk, now Brest-Litovsk, then part of Tsarist Russia (now Belarus). He was born into a devout Zionist family as the son of Zeev Dov and Hassia Biegun.
Begin became a member of the ‘Polish Zionist Betar Youth Group’ in 1928. Betar was a pan-European activist group committed to the eventual establishment of a separate Jewish state encompassing both banks of the Jordan River, an area currently occupied by the British-ruled Palestinian State.

Begin earned a law degree from the ‘University of Warsaw’ in Poland while actively participating in Betar. By 1938, at the age of 25, he had been named the organization’s leader, a position widely regarded as one of the most important Jewish positions in pre-Nazi Europe.

When the Nazis invaded Poland and other parts of Europe, Jews were desperate for an escape route and a safe haven. His parents and brother were apprehended by the Nazis in 1940 and died in a concentration camp.

Menachem escaped the Nazis in 1940 but was quickly apprehended and held by the Soviets. He was immediately transferred to a Siberian work camp, where he was held for a year before being released.

In 1941, he traveled to British-ruled Palestine with a Polish exile group to continue their work toward the establishment of an independent Jewish state.

Begin and his compatriots began conducting raids and terrorist attacks against the ruling British and Palestinians in Palestine in 1942. For the next three years, the assaults continued. He was appointed commander of the ‘Irgun Zvai Loumi’ party in 1943. The British once offered a sizable bounty for his capture.

He founded the so-called ‘Freedom or Herut Party’ in 1948, shortly after Israel became a nation. The party gradually gained popularity in Israel.

He joined the ‘National Unity Party’ in 1956 with the stated goal of establishing a unified political focus on defending Israel’s security. A decade later, Begin served as a minister without portfolio.

Mr. Begin surprised many on May 17, 1977, following his election as Prime Minister, with an immediate offer of peace and friendship to the surrounding Arab countries of Egypt, Jordan, and Syria. He proposed convening a meeting of all neighboring leaders to discuss and finally put an end to the bloodshed between Jews and Arabs. Egypt’s President Anwar Sadat accepted the challenge.

As a result of these secret meetings, Sadat paid a state visit to Jerusalem. The negotiations culminated in 1978 with the signing of the ‘Camp David Accord,’ facilitated by US President Jimmy Carter. The Accord brought an end to Israel’s long-running war with Egypt, returned the Sinai Peninsula to Egypt, and established an open relationship between the two countries.

Begin issued a severe military response in 1981 against the ‘Palestinian Liberation Organization’ (PLO), which was operating in Lebanon at the time. For a time, the response effectively eliminated the PLO’s presence.

Syrian influence thwarted the possibility of a comprehensive peace between Lebanon and Israel in 1982.

Prime Minister Begin was adamantly opposed to the establishment of a neighboring Palestinian state throughout his tenure in office until his retirement in 1982. He made it abundantly clear that Israel could never cede Judea, Samaria, or Gaza due to their historic significance.

He resigned from his position in 1983. His wife Aliza had died the previous year, and the strains of office had left him physically frail.

His 1951 book ‘The Revolt’ chronicles the struggle against the British and the development of an independent Jewish state prior to Israel’s establishment.

In 1957, he published ‘White Nights,’ a story about his imprisonment in Russia that depicts the hopelessness and isolation of confinement in such a remote location. Originally published in Hebrew, the autobiographical account was later translated into English.

Begin shared the ‘Nobel Peace Prize’ with Anwar Sadat in recognition of their efforts to bring about a lasting peace between Israel and Egypt.

In 2005, Israeli historians and intellectuals ranked Begin fourth among history’s ‘200 Greatest Israelis’ for his lifelong struggle to establish and maintain an independent Jewish state.

He retired shortly after the death of his wife Aliza in 1982 and returned to an apartment, leaving only to visit his wife’s grave. They were preceded in death by a son, two daughters, and nine grandchildren.

Menachem Begin will be remembered primarily for his 1978 peace initiative with Egypt, as well as his lifetime dedication to the establishment and preservation of Israel.

Menachem is one of the wealthiest world leaders and is ranked as the world’s most popular leader. Menachem Begin’s net worth is estimated to be around $1.5 million, based on our analysis of Wikipedia, Forbes, and Business Insider.

At the age of thirteen, this famous politician delivered his first political speech.

He worked in Palestine as an interpreter for the British Army, having learned English through BBC radio broadcasts.