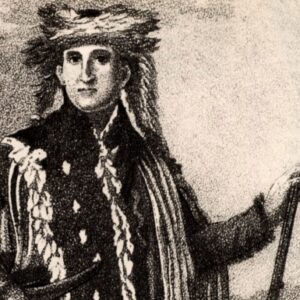 Meriwether Lewis was an American explorer. He is most known for leading the Lewis and Clark Expedition. The expedition’s goal was to investigate the Louisiana Purchase (US land obtained from France in 1803), establish trade with indigenous, and claim Oregon Country and the Pacific Northwest for the US before the European countries. This mission also attempted to collect scientific data and understanding about locals, including flora and animals. President Thomas Jefferson appointed him Governor of Upper Louisiana after his successful expedition. To honor Lewis and Clark, gold ‘Lewis and Clark Exposition dollars’ were produced, as were postage stamps. Many plants and subspecies bear his name. Lewis County, Tennessee and Lewis County, Washington, as well as academic institutions and US Navy vessels, were named after him.

His father was a lieutenant in the Continental Army who died of illness in November 1779. His parents were cousins. Jefferson knew Lewis since he was a child and had a long-standing relationship with his family.
Six months after his father’s death, his mother married retired army captain John Marks.

After settling in Wilkes County (now Oglethorpe County) along the Broad River, his mother and stepfather migrated to Georgia in May 1780 with their three children. On a 1,000 acre plantation
His half-brothers John Hastings and Mary Garland Marks were born in 1785 and 1788 respectively.

Meriwether Lewis had no formal education until he was 12 years old, but he was keen on improving his hunting skills, often hunting with his dog at night. He grew up outdoors and interested in natural history. His mother taught him how to harvest therapeutic wild herbs.

At 13, his parents took him to Virginia to study under Matthew Maury and Parsons William Douglos. Elder brother Nicholas Lewis became his guardian. Dr. Charles Everitt taught him until 1790 when Rev. James Waddell took over.
He graduated from Liberty Hall (now Washington and Lee University) in 1793.

He built the Locust Hill estate, preserving the vegetation and fauna. After John Marks’ death in 1792, his mother and half siblings returned to Locust Hill.

In 1794, he joined the Virginia Militia and was ordered to quell the Whiskey Rebellion.
The US appointed him Ensign (equivalent to Lieutenant) in 1795. Army. He was a captain in the Frontier Army for six years. His commanding commander at Fort Greenville was William Clark, his Lewis and Clark Expedition partner.

On April 1, 1801, he became President Jefferson’s secretary. Lewis, like Jefferson, was a Republican.
Jefferson assigned Meriwether Lewis to lead an exploration of the Pacific Northwest regions west of the Missouri. The expedition was approved by Congress in 1803 and was the first transcontinental military exploration.
Jefferson was the first to teach him navigation. He later studied cartography and astronomy in Philadelphia.
Lewis chose Clark to share command of the expedition with him. Sacagawea, a Shoshone Indian, was a French-Canadian fur trader’s wife.

This expedition’s goal was to investigate the area, trade with the indigenous, and establish US authority over the region ahead of the European governments.

In addition to trading with Europeans, Native Americans were connected to worldwide marketplaces.
It arrived in November 1805, after crossing the Oregon Country (a disputed region beyond the Louisiana Purchase).

They returned in 1806. The mission’s accomplishment bolstered the American ideal of “Manifest destiny,” the idea that the US was destined to span North America from Atlantic to Pacific. After the voyage, he received 1600 acres of property.

Jefferson appointed him to the Upper Louisiana Territory in March 1807. His excessive drinking and tardiness as governor strained his relationship with Jefferson. Then, in March 1808, he travelled to St. Louis.
Lewis left for Washington on September 3, 1809. to address matters relating to unpaid drafts against the War Department as governor of the Upper Louisiana Territory.

His contributions to science, western exploration, and explorer lore are enormous.
The 1803 Louisiana Purchase increased the US’s size. Lewis and Clark recorded and sketched the region’s flora and animals, as well as the natives.

Meriwether Lewis was found dead at the Grinder’s Inn in Tennessee on October 11, 1809. His death remains unexplained. Near Grinder’s Stand.
Tennessee placed a memorial over his burial in 1848.

Meriwether is a wealthy and well-known Explorer. Meriwether Lewis net worth is estimated at $1.5 Million by Wikipedia, Forbes, and Business Insider.