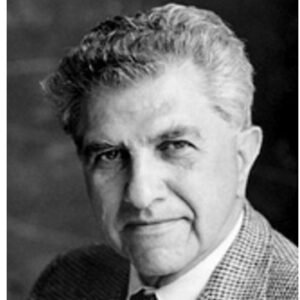 Merton Howard Miller was an American economist who made significant contributions to finance theory. Born in the early 1920s to a Jewish emigrant family, he spent the most of his formative years during the Great Depression. Despite the odds, his parents made certain that he received the greatest education possible. He was a graduate of Boston Latin School and Harvard University, and he worked for the US Treasury Department during WWII. He went on to receive his PhD from John Hopkins University and then joined Carnegie Institute of Technology in Pittsburg after a year at the London School of Economics. He met Franco Modigliani there and co-wrote the Modigliani-Miller theorem with him, which ushered in a new era in corporate finance. After that, he became a member of the University of Chicago’s faculty, where he continued to work on corporate finance. However, starting in the early 1980s, his study focus switched to the financial services industry’s regulatory and financial issues. Miller was awarded a share of the Nobel Memorial Prize in Economic Sciences ten years before his death from cancer, while still a professor at Chicago University, for his “pioneering contribution in the theory of financial economics.”

Merton Howard Miller was born in Boston, Massachusetts on May 16, 1923. Joel Miller, his father, was a second-generation Jewish emigrant from England, whose cigar-making family emigrated in the mid-nineteenth century. He was a well-known lawyer who eventually went on to represent his state at the Republican National Convention.
Joel began producing a local newspaper shortly after his marriage to Sylvia Francis Starr, a Yiddish Russian who had immigrated to the United States with her family when she was sixteen years old.

Joel Miller became interested in law after reporting on specific occurrences involving judges. He graduated from Harvard University with a bachelor’s degree and went on to Suffolk Law School to study law, eventually opening his own business in 1929, shortly before the Great Depression began. He was 35 years old at the time.

Merton was the only child of his parents during the Roaring Twenties. His childhood was spent in Dorchester, a working-class neighborhood of Boston. Later, when the Great Depression hit, he saw people in distress all around him.

Joel, on the other hand, had already established his profession. As a result, he was able to provide his son with a good education by enrolling him at the famed Boston Latin School, a public school founded in 1635 to educate the city’s affluent sons.

In 1944, he earned an artium baccalaureus (equivalent to a Bachelor of Arts at other colleges). Meanwhile, he was called for war duty, but due to a defect in one ear, he was sent to the US Treasury Department’s Division of Tax Research as his war service.

He later joined the Board of Governors of the Federal Reserve System’s Division of Research and Statistics in Washington. At the same time, he began taking evening classes at nearby George Washington University in the hopes of earning his doctorate.

Merton Miller discovered in 1949 that he couldn’t give his work and studies equal attention and that he’d have to choose between the two. To his parents’ dismay, he chose Johns Hopkins University in Baltimore over Harvard University, where he had hoped he would attend.

One of the reasons he chose Hopkins was that it gave him a teaching position, which would allow him to earn a decent living. It was also creating a solid financial program, despite the fact that it was largely renowned for its medical courses.

Miller was also drawn to Hopkins because it would allow him to work with Fritz Machlup, an Austrian-American economist who is credited with popularizing the concept of the information society. He earned his PhD in 1952 while working with Machlup.

At the Carnegie Institute of Technology

Merton Miller was appointed as a Visiting Assistant Lecturer at the London School of Economics for the 1952-53 session in 1952, shortly after completing his PhD. He enrolled in the Graduate School of Industrial Administration in Pittsburg, Pennsylvania, as soon as he returned in 1953.

It was one of the most influential research-oriented business schools in the United States, and it was located on the campus of the Carnegie Institute of Technology (now Carnegie-Mellon University). He met Franco Modigliani here and began working with him on corporate finance issues.

Miller and Modigliani, according to some reports, were both assigned to teach corporate finance. However, none of them knew anything about a company’s optimal capital structure. As a result, they proceeded to attentively research the available literature and were startled to discover that no cohesive or acknowledged principle existed on the issue.
They quickly got to work on it, examining the subject from several angles. Their first work, ‘The Cost of Capital, Corporate Finance, and the Theory of Investment,’ was published in the American Economic Review in 1958. The theorem was eventually dubbed the Modigliani-Miller theorem or M&M theorem.

They continued to collaborate on the same subject after that, producing a number of papers on corporate finance together. ‘Dividend Policy, Growth, and the Valuation of Shares’ was the most important of them all. The paper, which was published in 1961, expanded on the main findings of their previous work and demonstrated that, in the context of investment decisions, dividend policy is likewise useless.

On the University of Chicago

Merton Miller joined the faculty of the University of Chicago’s Graduate School of Business in 1961, while Modigliani joined MIT in 1962. Despite this, they worked together on a number of additional projects until the mid-1960s.
Miller went at the University of Louvain in Belgium for a one-year visiting professorship in 1966. In 1967, he returned to the University of Chicago to focus on corporate finance. He was named the R. McCormick Distinguished Service Professor of Finance at some point.

Meanwhile, in 1972, he continued the work he had begun with Modigliani and co-wrote ‘The Theory of Finance’ with his colleague Eugene Fama. Fama was his first PhD student, by the way.

He grew increasingly interested in the difficulties that the financial services industry faces as a result of his work with the financial exchanges. His current research focuses on the economic and regulatory issues that securities and options exchanges face.

Despite his busy schedule, he worked on eight works with others. ‘Macroeconomics: A Neoclassical Introduction,’ which he co-wrote with Charles W. Upton, is a textbook that is well regarded. The paper was the first to emphasize the importance of the neoclassical growth model, and it was published in 1986.

Then, in 1991, he authored ‘Merton Miller on Derivatives’ and ‘Financial Innovations and Market Volatility.’ These works include information about the current situation of the market as well as the future of investment vehicles such as stocks, bonds, and securities.

Merton Miller formally stepped down as a professor at the University of Chicago in 1993. After that, he stayed on as a Professor Emirates and taught for a few more years until his death in 2002.

Merton Miller is widely known for his groundbreaking study that revolutionized corporate financial processes. The Modigliani-Miller theorem, which he co-authored with Franco Modigliani, became the foundation of current capital structure thought. They established that there is no such thing as the ideal debt-to-income ratio. According to the notion, business executives should strive to enhance corporate net wealth while minimizing tax liabilities, leaving the debt ratio chips to fall where they may.

Merton H. Miller, Harry M. Markowitz, and William F. Sharpe were jointly awarded the Sveriges Riksbank Prize in Economic Sciences in Memory of Alfred Nobel in 1990 “for their pioneering contributions in the theory of financial economics.”

Merton Miller married Eleanor Natalie Cohen, also from Boston, in 1943, shortly after graduating from Harvard University. Pamela, born in 1952, Margot, born in 1955, and Louise, born in 1958, were their three daughters. In 1969, his wife passed away.

He later married Katherine Miller, but they had no children together. They owned a rural cottage in Woodstock, where they spent their weekends tending to the garden, but they usually lived in their townhouse in Hyde Park. He also enjoyed football and was a fan of the Chicago Bears.

Miller died of lymphoma on June 3, 2000, at the age of 77, at his home in Chicago. His second wife Katherine, three children, and two grandsons, Andrew and Eric, survive him.