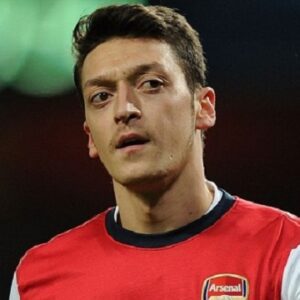 Mesut Ozil is a well-known German player who rose to prominence after being named one of the nominees for the FIFA World Cup 2010’s ‘Golden Ball Award.’ Mesut also received widespread praise and appreciation for his performance in the 2014 FIFA World Cup final, in which Germany defeated Argentina to secure the title of world champions. Since 2009, Ozil has been a member of the German national team. He now plays for Arsenal, an English football club. His professional career began when he was selected as a member of the team to represent ‘Schalke’—his hometown club—in the 2006 Bundesliga, Germany’s national league. Following his sensational performance at the 2010 FIFA World Cup in South Africa, he was signed by Real Madrid, the storied Spanish soccer club, to play in club championships. In 2013, though, he was sold to Arsenal for a staggering £42.5 million. Mesut, a midfielder, is known for his combative style of play, with many footballers and coaches seeing traces of Zinedine Zidane, the renowned French footballer, in him.

Mesut Ozil was born in Gelsenkirchen, North Rhine-Westphalia, Germany, on October 15, 1988.
He began his career playing for local Gelsenkirchen clubs before moving on to Rot-Weiss-Essen, an Essen-based DFB football club, where he spent five years.

In 2005, Ozil was accepted into Schalke 04’s youth academy. He was an offensive midfielder for FC Schalke 04, wearing the number 17 shirt. He turned down a substantial offer from Schalke 04, claiming it was “peanuts,” and moved to Werder Bremen in 2008.

Werder Bremen, a German Football Association team headquartered in the state of Bremen in northwest Germany, agreed to pay Mesut the astronomical sums he asked. He agreed to a three-year contract with the club. When he played for Werder Bremen, he wore the number 11 shirt.

On April 26, 2008, Ozil scored his first goal in a Bundesliga match, helping Werder Bremen to a 2-1 victory over Karlsruher SC. He scored the game’s sole goal against Bayer Leverkusen the next season, enabling his team qualify for the 2009 DFB-Pokal.

In the 2009-2010 Bundesliga season, Mesut loomed large for Werder Bremen as an effective playmaker who set up multiple goals for his team. He scored his 100th Bundesliga goal against Schalke 04, the club with which he began his professional football career.

Ozil’s services were important in Werder Bremen reaching the DFB-Pokal finals in 2010. Bayern Munich, on the other hand, proved too strong for Werder Bremen, who were defeated by a score of 4 to zero.
Ozil was named to the German national team for the 2010 FIFA World Cup, where he had a standout performance. Managers and coaches from Europe’s most prestigious football clubs, including Manchester United, Real Madrid, Arsenal, and Barcelona, were impressed by his dazzling performance.

Mesut Ozil joined Real Madrid from Werder Bremen on August 22, 2010, for a hefty transfer price of around €15 million. He made his Real Madrid debut against Hercules, which his team easily defeated. Ozil made his La Liga debut for Real Madrid against Mallorca, which resulted in a 0-0 draw.

On September 15, 2010, Ozil made his Champions League debut for the legendary Spanish club, assisting Gonzalo Higuain in scoring a goal against Ajax. He finished the season with 25 assists, more than any other player in the major European club championships at the time.

Mesut began his Real Madrid career by wearing the number 10 jersey for the whole 2011-12 season, signifying Jose Mourinho’s desire to utilize his playmaking abilities. In the first round of the two-legged 2011 Supercopa de Espana, he scored his first goal against Barcelona.

Ozil was once again at the top of La Liga’s assists tally in the 2011-12 season, with a total of 17 assists. Real Madrid won their 32nd La Liga title, and Mesut played a key role in the victory.
Mezil was nominated for the UEFA Best Player in Europe Award and was shortlisted for the FIFA Ballon d’Or Award for his outstanding playmaking for both Germany and Real Madrid.

Mesut Benzema showed his playmaking abilities on multiple occasions throughout the 2012-13 season, most notably by aiding his teammate Christian Ronaldo in scoring goals. Despite Ozil’s 26 assists, Real Madrid was only able to win the Supercopa de Espana in the current season.

Mesut was leased out to Arsenal for a sum of £42.5 million after a highly successful three-year spell with Real Madrid, making him the most expensive German footballer of all time. He wore the number 11 jersey at Arsenal and was a center-forward.

Ozil’s debut game as an Arsenal player came against Sunderland, in which he assisted colleague Olivier Giroud in scoring a goal, and Arsenal won 3-1. His debut goal for ‘The Gunners’ came in a Champions League match against Napoli, which the former won.

Mesut scored seven goals and added 13 assists in 40 appearances for Arsenal in his first season. Ozil has emerged as a strong contender for the FIFA Ballon d’Or Award, as well as a member of the UEFA Team of the Year.
Mesut Ozil was a key figure in Germany’s World Cup victory in 2014. He scored the game-winning goal against Algeria in the round of 16 and assisted Sami Khedira in Germany’s 7–1 semi-final triumph over Brazil.
He played 120 minutes in the 2014 FIFA World Cup final against Argentina before being replaced by Per Mertesacker. The match ended in a 1-0 victory for Germany.

In the 31 games that Ozil played for Arsenal in the 2014-15 season, he scored 5 goals and assisted on 7 others. He had a strong showing in the 2015 FA Cup final, which Arsenal lost to Aston Villa by a landslide.

Mesut scored his first goal against Manchester United in the 2015-16 season, which Arsenal won 3-0. His third season at Arsenal ended with 20 assists and eight goals, earning him the title of ‘Arsenal Player of the Season.’

Mesut Ozil is a Muslim who was born in Germany. Ozil started seeing Mandy Capristo, a singer, in 2013, but their relationship ended in 2014 after it was revealed that he was seeing another woman. Nonetheless, in November 2015, he restarted his connection with Mandy.
Mesut is also known for his philanthropic nature, having donated significant sums to a number of humanitarian causes. He donated the entirety of his 2014 World Cup winning money (about USD 5,00, 000) to the treatment of around 23 Brazilian children.

Mesut Ozil has a net worth of $120 million dollars.