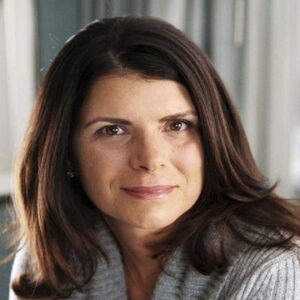 Former American soccer player Mia Hamm, also known as Mariel Margaret Hamm-Garciaparra, is a two-time Olympic gold medalist and two-time Women’s World Cup champion. She spent 17 years as a member of the US women’s national soccer team, and up until June 2013, she held the record for most goals scored on the international stage. Hamm was chosen as Soccer USA’s female athlete of the year for five years in a row in addition to being named FIFA’s World Player of the Year for two years in a row. She also served as the face of the nation’s first professional women’s soccer league. She currently ranks third in the history of the US national team in terms of international appearances (276), and first in terms of career assists. She is the first woman to be inducted into the World Football Hall of Fame and was named Sportswoman of the Year by The Women’s Sports Foundation for two years. She is the global ambassador for Barcelona FC and a co-owner of the Major League Soccer team Los Angeles FC. In 2014, she was appointed to the National Soccer Hall of Fame’s board. She also started the Mia Hamm Foundation, which supports bone marrow research.

Bill Hamm, an Air Force pilot, and Stephanie welcomed their fourth child, Mia, into the world on March 17, 1972 in Selma, Alabama. She and her family resided at numerous American Air Force bases throughout her formative years. She is one of five siblings.

When she and her family relocated to Florence, Italy, she participated in soccer for the first time. She initially joined a soccer team in Texas. Garrett, she adopted brother, and she was coached by her father.

She assisted the Burke, Virginia, soccer team in winning the 1989 state championships while she was a student at Lake Braddock Secondary School. She received a scholarship to attend the University of North Carolina at Chapel Hill from 1989 to 1994, where she contributed to the Tar Heels’ four NCAA Division I Women’s Soccer Championship victories.

Mia Hamm was the youngest member of the squad in 1991 when she competed at the FIFA Women’s World Cup in China. She was only 19 years old. She guided the team to victory in the first game by scoring a game-winning goal. They defeated Germany in the semi-final, and after overcoming Norway in the finals game, they won the inaugural World Cup.

She scored a goal against China in 1995’s second World Cup, but the game ended in a tie. The second game versus Denmark was won by the US team. They won over Japan in the quarterfinals, while Norway prevailed in the final.
The US team defeated Denmark, Sweden, and Norway in the inaugural Olympic tournament to feature women’s soccer at the 1996 Olympic Games in Atlanta. Hamm was hurt in the waning seconds of the final game versus China and had to be taken off the field. Nevertheless, the US team took home their first gold medal at an Olympics.

She broke the previous record for most international goals scored by Italian player Elisabetta Vignotto in 1999 with her 108th goal for the US team. Up until June 2013, when American athlete Abby Wambach broke it, Hamm owned the record.

She assisted on the US team’s winning goal against Norway during the 2000 Sydney Olympics. They overcame Nigeria, and Hamm scored the game-winning goal against Brazil in the semifinals to help her break the record for most goals scored by a woman or man in international competition. The US team, however, lost to Norway in the championship game and took home the silver medal.

She participated as a founder member of the Women’s United Soccer Association (WUSA), the first women’s soccer league in the US, in 2001. She played with the Washington Freedom from 2001 to 2003. She was hailed as the league’s superstar throughout its entire existence.

She achieved a record for the most international goals scored by any player in history, male or female, in July 2004 when she scored her 151st goal against Australia. She did so up until 2013.

At the age of 32, Hamm made her retirement announcement on May 14, 2004. In December 2004 she participated in her final international match. She played 42 games in international competitions during her time with the US women’s national soccer team and scored 14 goals. She participated in 276 matches for the US national team. She participated in four FIFA Women’s World Cup competitions, competing for the US, Sweden, and China (1991, 1995). (1999, 2003). In three Olympic Games (1996 in Atlanta, 2000 in Sydney, and 2004 in Athens), she served as the team’s captain.

She received the Sportswoman of the Year award from the Women’s Sports Foundation in 1997 and 1999. Nike gave Hamm’s name to the biggest structure on its headquarters campus in 1999.
She was ranked among the best three female soccer players of the 20th century by the FIFA Female Player of the Century Awards in 2000.

For five years, from 1994 through 1998, she was chosen as the US Soccer Female Athlete of the Year. She received three ESPYs, including those for female athlete of the year and soccer player of the year.
She was recognized as one of the best active soccer players in the FIFA 100 in 2004.

She was admitted to the World Football Hall of Fame in 2013. She was selected to the USWNT All-Time Best XI by US Soccer in the same year. In 2014, she was given the Golden Foot Legends Award.

Christiaan Corry, a helicopter pilot for the US Marine Corps, and Mia Hamm got divorced in 2001. On November 22, 2003, she wed shortstop Nomar Garciaparra of the Boston Red Sox. Grace Isabella and Ava Caroline are their identical twin girls, and Garrett Anthony is their son.

She is the author of the fiction book “Winners Never Quit” and the national bestseller “Go For the Goal: A Champion’s Guide to Winning in Soccer and Life.”

After the passing of her adopted brother Garrett in 1997 from the uncommon blood condition aplastic anemia, she started the Mia Hamm Foundation. The charity works to raise money for those in need of bone marrow transplants while also raising awareness of bone marrow illnesses. It also offers women the chance to be more powerful in the world of sports.

She served as an ambassador for various companies during her soccer career, including Gatorade, Nike, Dreyer’s Ice Cream, Pepsi, and others. She has appeared on the covers of “Sports Illustrated,” “Time,” and “People.”

She appeared on numerous television programs, including “Good Morning America,” “The Oprah Winfrey Show,” “Late Night with David Letterman,” and a number of others. She has been featured on Biography and ESPN SportsCentury.

Former American professional soccer player Mia Hamm has a $40 million dollar net worth. Together, she and her husband of 20 years, former major league baseball player Nomar Garciaparra, have a net worth of that amount.