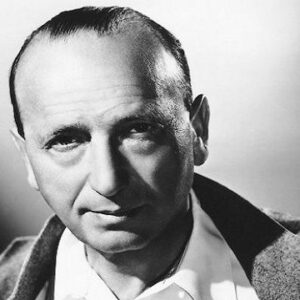 Michael Curtiz was a Hungarian-born American film director best known for masterpieces such as ‘Casablanca,’ ‘Mildred Pierce,’ and ‘White Christmas.’ He directed almost 50 pictures in Europe and over 100 in the United States, a production unequaled by anybody else of his generation. He achieved peak success in the 1930s and 1940s, during Hollywood’s Golden Age, while working for the Warner Bros. company. Born into a Hungarian Jewish family, he developed an early interest in show business and studied acting at Budapest’s Royal Academy of Theatre and Art. He made his theater debut in 1910 in Budapest and went on to appear in and direct numerous stage productions. He quickly delved into the newly developing medium of filmmaking, starring in ‘Today and Tomorrow,’ the embryonic Hungarian film industry’s first release. Soon after, he directed several pictures and rose to prominence as a silent film director in Hungary. He eventually made his way to Hollywood in 1919, joining the Warner Bros. company. He began his career in Hollywood with silent films and seamlessly transitioned to talkies with the invention of sound. He worked for Warner Bros. for nearly three decades, producing noteworthy films such as ‘Captain Blood,’ ‘Dodge City,’ and ‘Casablanca.’

He was born in Budapest, Hungary, as Manó Kaminer to a Jewish family (then Austria-Hungary). Little is known about his early life due to the lack of authentic records. Even his birth date, widely thought to be December 24, 1886, is debatable.

He made up wild tales about his youth, frequently contradicting himself. According to his own narrative, he ran away from home to join the circus and competed in the 1912 Olympic Games for Hungary’s fencing squad. However, there are no proofs to support these assertions.
He most likely grew up in a typical middle-class family. He attended Markoszy University and Budapest’s Royal Academy of Theatre and Art.

In 1910, he began his career as a theatre actor and went on to act in and direct numerous stage productions. When Hungary’s film business developed, the enterprising young men delved into it and starred in ‘Today and Tomorrow’ (1912), the nascent Hungarian film industry’s first feature picture.

In 1913, he traveled to Denmark and spent six months developing his technique at the Nordisk studio. When World War I began, he briefly fought in the Austro-Hungarian Army’s artillery but returned to filmmaking by 1915.

On his return to Hungary, he directed a number of silent pictures and by the late 1910s had established a reputation for himself. He fled the nation in 1919 and spent a few years in Vienna. He maintained his successful career as a filmmaker, producing numerous films, including the Biblical epics ‘Sodom und Gomorrha’ (1922) and ‘Die Sklavenkönigin’ (1923). (1924).

Jack Warner noticed one of his pictures and invited the Hungarian director—who later changed his name to Michael Curtiz—to Hollywood in 1926. He began his career in Hollywood with silent films and quickly transitioned to talking pictures with the part-sound flicks Tenderloin’ and ‘Noah’s Ark.’ (both 1928).

He was also a productive director in the 1940s, directing several notable pictures. Among his most well-known works from this period are ‘The Sea Wolf’ (1941), ‘Casablanca’ (1942), and ‘Mildred Pierce’ (1942). (1945). He also directed the World War II propaganda film ‘Mission to Moscow’ (1943), which President Franklin D. Roosevelt commissioned on behalf of the US and British ally, the Soviet Union.

Humphrey Bogart, Ingrid Bergman, and Paul Henreid feature in Michael Curtiz’s classic film ‘Casablanca.’ The film, a love drama set during World War II, was a critical and commercial success upon its premiere and has routinely ranked towards the top of lists of the greatest films of all time.

He directed Joan Crawford as the title character in ‘Mildred Pierce,’ a film noir about a middle-aged mother dealing with an ungrateful daughter. Crawford won an Academy Award for the film, which was designated “culturally, historically, or aesthetically significant” and included in the United States Library of Congress’s National Film Registry in 1996.

Michael Curtiz was married three times. In 1918, he married Lucy Doraine, whom he divorced in 1923.
His second marriage, in 1925, to Lili Damita, was brief and dissolved the following year.

He was a short-tempered and unpleasant man to work with, despite his brilliance as a filmmaker. His marriages were similarly turbulent and emotional. In 1929, he married actress and playwright Bess Meredyth. This marriage, too, was unhappy, despite the fact that the couple did not divorce.

Curtiz was never truly faithful to his spouses and engaged in sexual contact with other women during their marriages. Additionally, he fathered children outside of marriage.
He later succumbed to cancer and died on April 10, 1962, at the age of 75.

Michael is one of the wealthiest directors and is ranked among the most popular. Michael Curtiz’s net worth is estimated to be $1.5 million, based on our analysis of Wikipedia, Forbes, and Business Insider.