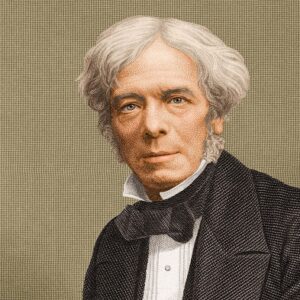 Michael Faraday was a prolific scientist in the nineteenth century. Faraday was a British scientist and chemist well known for his discoveries of electromagnetic induction and electrolysis principles. His greatest achievement, however, was the invention of the electric motor. Faraday is also credited with inventing the earliest version of the Bunsen burner. Faraday has always been fascinated by the concept of energy, specifically force. He was able to make key discoveries in electricity later in life as a result of his early reading and experiments with the concept of force. Read the following paragraphs to learn more about this British chemist and physicist.

Michael Faraday was born in Newington Butts, which is now part of the London Borough of Southwark. He did not come from a wealthy household. James, his father, belonged to the Glassite Christian group. James worked as a blacksmith’s apprentice in the community. Michael Faraday, the third of four children, received just a minimal education. In 1804, he worked as an errand boy for bookstore George Riebau, bringing newspapers and other items, and was indentured to him for seven years a year later. During his seven years as an apprentice, Faraday read a lot of books, but two of them in particular caught his attention: Isaac Watts’ The Improvement of the Mind and Jane Marcet’s Conversations on Chemistry. This reading practice not only improved his knowledge and understanding, but it also influenced his life path. Faraday’s intense interest in science, particularly electricity, was cultivated in this book.

At the end of his apprenticeship in 1812, William Dance, a regular customer at Riebau’s and one of the founders of the Royal Philharmonic Society, presented Faraday with tickets to four lectures at the Royal Institution, to be delivered by the eminent professor of chemistry, Humphry Davy, and John Tatum, founder of the City Philosophical Society. Faraday gave Davy a three-hundred-page book including notes collected during the presentation in an attempt to thank him. When Davy’s eyesight was impaired in an accident with nitrogen trichloride, Faraday got a temporary work as a secretary to him. Davy appointed Faraday as Chemical Assistant at the Royal Institution in March 1813, when one of the Royal Institution’s helpers, John Payne, was fired.

Faraday’s later life, on the other hand, was not as easy as it had been up to that point. Davy’s valet did not accompany him on his extended tour, which lasted from 1813 to 1815. As a result, Faraday had to fill the void. While the voyage provided Faraday with access to Europe’s scientific elite and introduced him to a variety of interesting ideas, it was not a pleasant experience. Davy’s wife was biased by classism and refused to regard Faraday as an equal, making life a living misery for Faraday, who was so exhausted by the suffering that he considered giving up science completely. Faraday was appointed as the interim supervisor of the Royal Institution’s residence in 1821.

In the field of chemistry, you have made a significant contribution.
While working as Davy’s assistant, Faraday made his first contribution to chemistry. He was working on a chlorine research project. Faraday also performed tests on gas diffusion. He also succeeded in liquefying numerous gases, researching steel alloys, and developing several new types of glass for optical applications. Faraday’s most famous work was the invention of the first Bunsen burner (as we know it today), which is still used as a suitable source of heat in science laboratories all over the world. The fact that he discovered the chemical substance benzene, a chemical compound of carbon and hydrogen, demonstrates his considerable work in the field of chemistry. Faraday also found two new chlorine and carbon compounds. The first is utilized in smoke grenades, while the second is used in dry cleaning and spot removal. Faraday is also credited for inventing the rules of electrolysis and popularizing terms like anode, cathode, electrode, and ion, which he did with William Whewell’s help. Faraday is credited with being the first to describe what we now call metallic nanoparticles. Faraday discovered that the optical properties of gold colloids differed from those of the comparable bulk metal in 1847, and this was the beginning of nanoscience.
Contribution in the Fields of Magnetism and Electricity
Faraday’s discoveries sparked a revolution in the fields of electricity and magnetism. His work in the field of electricity had a huge impact on the development of mathematics. Faraday’s first achievement in the field of electricity was the creation of the first electric motor. He laid the groundwork for current electromagnetic technology with his research and innovations at the time. He kept working in the lab, investigating the electromagnetic properties of materials and gaining the necessary skills. Faraday had built up a circuit to see if a magnetic field might regulate the flow of a current in a neighboring wire, but he discovered no relationship. Faraday spent the next seven years of his life working in the field of optical grade (heavy) glass, borosilicate of lead, which he would later use in his investigations linking light and magnetism.

Faraday began a series of experiments two years after Humphry Davy’s death, during which he discovered electromagnetic induction. The pinnacle of his achievement occurred when he wound two insulated coils of wire around an iron ring and discovered that when a current was passed through one coil, a transient current was induced in the other coil, a phenomenon now known as mutual induction. Faraday later established that a changing magnetic field causes an electric field in later studies. Later, James Clerk Maxwell used this relationship, and it is now one of the four Maxwell equations. After that, Faraday applied these concepts to build the electric dynamo, which was the forerunner of current power generators. Faraday conducted a series of experiments in 1839 to investigate the underlying nature of electricity. Faraday employed “static,” “batteries,” and “animal electricity” to create the phenomena of electrostatic attraction, electrolysis, and magnetism.

Faraday’s notion that electromagnetism flowed into the empty space around a conductor, which is at the heart of electromechanics, was initially dismissed but later accepted. Faraday, on the other hand, did not live to see it become a reality. Faraday investigated the idea that many materials exhibit a slight repulsion from a magnetic field, which he called diamagnetism, in 1845. He also discovered that by applying an external magnetic field aligned with the direction in which the light travelled, the plane of polarization of linearly polarized light could be turned. The Faraday Effect is the modern name for this phenomena. Faraday’s experiment on static electricity demonstrated that the charge exclusively lived on the exterior of a charged conductor, and that the charge had no effect on anything enclosed within the conductor. This was because the outside charges were redistributed in such a way that the interior fields associated with them were cancelled. In what is now known as a Faraday cage, this protective effect is exploited.

Later Years the of Michael Faraday

Faraday was elected a member of the Royal Society in 1824 at the Royal Institution of Great Britain. He was named director of the laboratory the following year. In 1833, Faraday was appointed to the position of Fullerian Professor of Chemistry, which he held for the rest of his life. Apart from the scientific research he did at the Royal Institution, Faraday also worked on a variety of other projects for private companies and the British government. Faraday devoted a significant amount of his effort to the design and operation of lighthouses. In addition, he was involved in what is now known as environmental science. Faraday was involved in advising the National Gallery on the cleaning and maintenance of its art collection while assisting with the organizing and judging of displays for the Great Exhibition of 1851 in London.
Michael Faraday was also heavily interested in the field of education. His series of lectures at the Royal Institution on the chemistry and physics of flames is still recognized as one of the first Christmas lectures for young minds, a tradition that continues today. Between 1827 and 1860, Faraday is known to have presented a total of nineteen Christmas lectures. In June 1832, the University of Oxford awarded Faraday an honorary Doctor of Civil Law degree for his achievements. Faraday was elected a foreign member of the Royal Swedish Academy of Sciences in 1838, and one of eight foreign members of the French Academy of Sciences in 1844. Meanwhile, during his lifetime, Faraday turned down offers of knighthood and twice turned down the position of President of the Royal Society. As a result of the Prince Consort’s representations, Michael Faraday was given a grace and favour residence in Hampton Court, Middlesex, free of all expenses and care in 1848. He retired and resided there ten years later.

Michael Faraday’s wedding bells rung on June 12, 1821. Sarah Barnard, his significant other, was the daughter of Edward Barnard, a Sandemanian silversmith. At the Sandemanian church, the couple first met through their family. Faraday confessed his beliefs to the Sandemanian community a month after his marriage. In the meeting house where he grew up, he served as a deacon and an elder for two terms. Paul’s Alley in the Barbican was the location of his church. Later, in 1862, the meeting building was moved to Barnsbury Grove, Islington, where Faraday served as elder for the last two years of his second tenure before quitting.
Death and the Afterlife
On August 25, 1867, at his home in Hampton Court, Michael Faraday died. After declining a burial in Westminster Abbey, he was buried in the dissenters’ (non-Anglican) part of Highgate Cemetery. Despite this, a memorial plaque honoring Faraday can be found near Newton’s tomb. A statue of Faraday stands outside the Institution of Engineering and Technology in Savoy Place, London, to pay honor to the famous scientist’s achievements. Faraday has a memorial in London, which is located near Faraday’s birthplace at Newington Butts, in the Elephant & Castle gyratory system. The memorial, designed by brutalist architect Rodney Gordon, honors Michael Faraday’s contributions to science. Not only does Walworth, London have a tiny park called Faraday Gardens, but it also contains a school called Michael Faraday Primary School. The Faraday School is located on Trinity Buoy Wharf, where his workshop still exists above the Chain and Buoy Store, opposite London’s only lighthouse.

Because of its proximity to Faraday’s birthplace in Newington Butts, South Bank University’s electrical engineering department is known as the Faraday Wing. While an eight-story building on the University of Edinburgh’s science and engineering campus is named after Faraday, a newly built hall of accommodation at Brunel University, the main engineering building at Swansea University, a hall at Loughborough University, and the instructional and experimental physics building at Northern Illinois University are all named after him. A number of streets have been named after this brilliant scientist in numerous countries and locations. Faraday’s portrait was on the reverse of the Bank of England’s Series E £20 banknotes from 1991 to 2001. The photograph depicted him giving a lecture with the magneto-electric spark apparatus at the Royal Institution. Following a UK-wide vote in 2002, Faraday was named the 22nd greatest Briton in the BBC’s list of the 100 Greatest Britons.