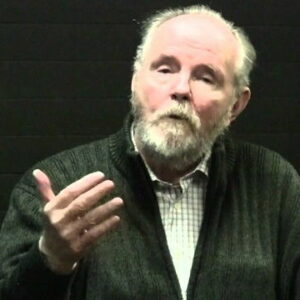 Michael Moriarty is a professional stage and screen actor who is best known for playing character roles. He is the one who brought the smart and moral police officer Ben Stone to life on TV. With a height of 6′ 4″, he is one of the tallest actors in Hollywood. There are some good things about being so tall. He seems scary because of how tall he is, which is something the actor took full advantage of. Son of a doctor, he became interested in acting at a young age. He studied theater in college before getting a scholarship to go to The London Academy of Music and Dramatic Art (LAMDA). He was very good at acting and worked hard at it, so there was no doubt that he would one day be a big name in the business. He started out as an actor at the New York Shakespeare Festival, where he did his first show. Eventually, he found his way into television. In the TV version of Tennessee Williams’s “The Glass Menagerie,” in which he played Jim, he got a lot of praise and became known to the audience. Because of his height, thin build, and piercing gray-blue eyes, he is a great choice to play characters with psychological problems.

George Moriarty and Elinor Paul brought him into the world in Michigan. His father was a police officer and a General Medical Surgeon. His grandfather played baseball well and was known for it.

After he finished high school, he went to Dartmouth College in New Hampshire. In 1963, he got his degree from there. During this time, he first appeared on stage in “Anthony and Cleopatra” as Octavius.
He got a scholarship to go to the London Academy of Music and Dramatic Art because he did well in school.

In the 1971 movie “My Old Man’s Place,” he played Trubee Pell for the first time. The next year, he played Ballard in the neo-noir detective movie “Hickey & Boggs,” which came out the year after.
In the 1973 movie “Bang the Drum Slowly,” he played a good baseball player named Henry Wiggen. The movie is about Henry’s friendship with a dying teammate, played by Robert De Niro.

In the 1973 TV movie “The Glass Menagerie,” he played the gentleman Jim O’Connor. The movie was based on a play by Tennessee Williams with the same name.

In the 1975 crime drama “Report to the Commissioner,” in which he played Detective Bo Lockley, his character killed an undercover policewoman by accident. Even though it was criticized when it came out, the movie became a cult favorite.

People liked his part as Eric Dorf in the miniseries “Holocaust,” which was shown in four parts on TV in 1978. From the point of view of a Jewish family, the show told the story of the Holocaust.
He starred along with Candy Clark, David Carradine and Richard Roundtree in the fantasy horror film ‘Q” in 1982.

His role was of that of a lowly, paranoid crook who had big dreams in life.
He again played a detective in the horror film, ‘The Stuff’ in 1985 in which a strange, yogurt like substance, marketed as ‘the stuff’ actually starts eating up the people who eat it.

The year 1990 was a great one for him as he was chosen to play the detective Ben Stone in the NBC legal drama, ‘Law & Order’. His height and steely eyes gave his character the credibility it needed and this role became one of his most memorable ones. He stayed with the show till 1994.

He appeared in ten episodes of the science fiction drama ‘Psi Factor: Chronicles of the Paranormal’ as Michael Kelly, a member of the recurring cast during the seasons 2-3 from 1997 to 1999.

He played the estranged father of the actor James Dean in the biographical television film, ‘James Dean’ (2001) which was based on the life of the American actor of the same name who tragically died at a young age.

In 2006 he played General Dutton in the science fiction television film, ‘Deadly Skies’ which is the story of two astronomers who try to stop a giant asteroid on a collision course with Earth.

He is best known for his portrayal of Ben Stone in the police procedural and legal drama television series, ‘Law & Order’ which originally aired on NBC in 1990. He appeared in 88 episodes of the crime drama for which he received serval accolades.

He got the Outstanding Supporting Actor in a Miniseries or Movie Primetime Emmy Award for playing Jim Connor in “The Glass Menagerie” (1973).

In 1978, he won the Golden Globe Award for Best Actor in a Drama Series and the Primetime Emmy Award for Outstanding Lead Actor in a Miniseries or Movie for his role as Eric Dorf in the miniseries or movie Holocaust.

Moriarty has married more than once. Francoise Martinet was his first wife. They got married in 1966 and split up in 1978. In 1978, he got married for the second time to Anne Hamilton Martin. They were together for almost 20 years before they split up in 1997.

In 1998, he married Suzana Cabrita for the third time. But this marriage also didn’t work out, and the couple split up in 1999. He is now married to Margaret Brychka, who is his fourth wife.

Michael is one of the most popular and wealthiest TV actors. Based on what we found on Wikipedia, Forbes, and Business Insider, Michael Moriarty has a net worth of about $1.5 million.