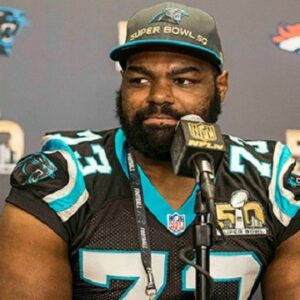 A rising star in the world of American football is Michael Oher. His mother spent much of the time under the influence of alcohol and narcotics, and his father frequently spent time in jail, thus he did not have a happy childhood. He struggled academically as a result, up until the point when he was placed in foster care. He matured in foster care before ultimately being taken in by a couple. His existence lacked the love and care that his adoptive parents gave him. He eventually became a better student and developed a stronger passion for athletics. He put a lot of effort into raising his grades so that he could enter the “National Collegiate Athletic Association” (NCAA). His love for the game served as fuel, and with persistence and hard effort, he eventually became an amazing player. He was invited to join the teams of many universities, and some even gave him scholarships. But he decided on the “University of Mississippi,” the school of his foster parents. Since that time, he has steadily ascended the success ladder and is currently one of American football’s most well-known figures. In addition to the numerous victories he has recorded in his career thus far, he also has a number of awards and trophies to his name.

Because his mother was an alcoholic and his father spent the majority of his time in prison, he did not receive much attention when he was a child. His father passed away in prison when Michael was a senior in high school.
Oher had to switch multiple schools after failing the first and second standards. When he was eleven years old, he was placed in foster care, and ever since, he has lived with several foster parents.

He was a good football player in high school. He enrolled at the “Briarcrest Christian School” at Tony Henderson’s recommendation. Oher improved his football talents there under the tutelage of coaches Hugh Freeze and Tim Long, and in 2003 he was named the Division II (2A) Lineman of the Year.

He was taken into the custody of Leigh Anne and Sean Tuohy in 2004, who also has a boy and a girl who attended the “Briarcrest Christian School.” The couple later adopted Oher.

He consequently received the proper care and attention he missed as a child. His requirements were satisfied, and he received training in a number of sports, including basketball and track.

He put in hard while in school and received good grades, which helped him gain admission to a Division I institution of the National Collegiate Athletic Association (NCAA).

He was given the choice to play for the “University of Mississippi” under the direction of coach Ed Orgeron despite having the chance to receive scholarships from schools like Alabama, Tennessee, Auburn, South California, and Louisiana State. As a result, he began to play football for the “Ole Miss Rebels” squad. He started off on the squad as a guard and was also named the Freshman All-America.

He was assigned to the left tackle position for the 2006 season, and following his sophomore and junior seasons, he was selected as an offensive lineman of the first-team “SEC” of the Southeastern Conference (SEC). He also made academic progress throughout this period.

He decided against participating in the 2008 NFL (National Football League) Draft and instead joined the senior squad for the Ole Miss Rebels. He was selected to the first team of All-Americans at the conclusion of this season. He finished his criminal justice diploma the following year.

He started the 2010 season as the right tackle, and the Ravens defeated the “New England Patriots” by a score of 33–14. His team announced that he would be the right tackle for the upcoming season.

In “Super Bowl XLVII,” the “Baltimore Ravens” defeated the “San Francisco 49ers” by a score of 34-31. This helped Oher win his first football championship since his football career began, the “Super Bowl ring.”

He was a finalist for the Outland Trophy, Conerly Trophy, Lombardi Award semifinalist, and SEC Jacobs Blocking Trophy in 2008.

I Beat The Odds: From Homelessness to The Blind Side and Beyond is the title of Oher’s book, which was published in 2011. Don Yaeger, an American sports journalist, is a co-author of this book.

This energetic sportsperson has a $16 million net worth, claims Celebrity NetWorth.

The foster parents of this professional football player collaborated on the 2010 book “In a Heartbeat: Sharing the Power of Cheerful Giving.”