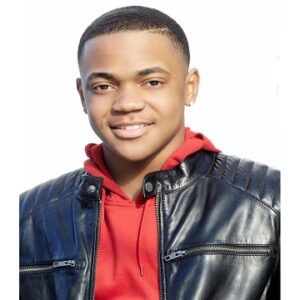 Michael Rainey Jr., a rising Hollywood star, is best known for his appearances in the hit television shows “Power” and “Orange is the New Black.” This young and attractive actor, who has earned a name for himself in the entertainment sector, began his career as a child artist, appearing in television and commercials, as well as music videos. In the popular American children’s television show ‘Sesame Street,’ he made his debut appearance. At the age of nine, he got his big break when he landed the lead part in the big screen film ‘Un altro mondo.’ His debut American picture was the criminal drama ‘Learning Uncle Vincent.’ He subsequently went on to play Cecil, the main character in the American historical drama film ‘The Butler,’ as a child actor in the younger version of the titular role. His roles as Michael Burset in the American comedy-drama web television series “Orange Is the New Black” and Tariq St. Patrick in the American crime drama television series “Power” garnered him a lot of fame and acclaim. ‘Barbershop 3: The Next Cut,’ a comedy film, and ‘Second Chance Christmas,’ a TV movie, are among his other acting credits.

Michael’s career in the world of beauty began as a child actor, with commercials on TV and in print, music videos, and his first appearance on-screen with the long-running American children’s television show ‘Sesame Street.’ He worked on commercials and print ads for large corporations such as AT&T, Target, and Toys R Us. His major break came in 2009, when he was just nine years old, when he was seen in the music video for ‘Regalo Pui Grande’ by Italian actor, film director, and screenwriter Silvio Muccino and writer Carla Vangelista, gaining him the lead role in the big screen picture ‘Un altro mundo.’ He had to stay in Italy for a while to play the key part of Charlie opposite Silvio Muccino in this 2010 film. He ultimately became fluent in Italian while preparing for his role in the film.

Returning to America, he played Woody Watson opposite American rapper and actor Common in the Sheldon Candis directed crime-drama film ‘Learning Uncle Vincent,’ which premiered at the ‘Sundance Film Festival’ on January 23, 2012 and was nominated for the ‘Grand Jury Prize.’ Moving on, he appeared in Lee Daniels’ critically acclaimed and commercially successful American historical drama picture ‘The Butler,’ which starred Forest Whitaker, Oprah Winfrey, Jane Fonda, and John Cusack, among others. Michael played Cecil, the main character, in the film, which was released on August 16, 2013, at the age of the latter’s portrayal in the film.

Between 2013 and 2015, he played Michael Burset in the first three seasons of the American comedy-drama web TV series “Orange Is the New Black.” He appeared in the 2014 TV1 film ‘Second Chance Christmas,’ directed by Alton Glass. He has played Tariq St. Patrick in the American crime thriller TV series ‘Power,’ which has been airing on the ‘Starz’ network since 2014. He has received a lot of praise for the role he played in four episodes of seasons 1 and 2 and has since become a regular in seasons 3 and 4. Meanwhile, he starred alongside Ice Cube, Eve, Anthony Anderson, Regina Hall, and Cedric the Entertainer in the critically acclaimed and commercially successful comedy film ‘Barbershop: The Next Cut,’ which was released in April 2016. Terron Forte is the character he will play in his upcoming film ‘Amateur.’

He was born in Louisville, Kentucky, on September 22, 2000, and raised in Staten Island, New York, where he currently resides. He is involved in a number of humanitarian activities and organizations, including ‘Find and Feed,’ an Indiana-based organization that helps the homeless. During the Christmas season, he shops for the less fortunate, feeds the hungry, and buys coats for the homeless. Apart from spending time with his two terriers, he enjoys playing video games and basketball. He also has a musical talent, as he plays the piano and composes music.

Rainey has a net worth of $1.2 million, which he has accumulated from his successful acting career.