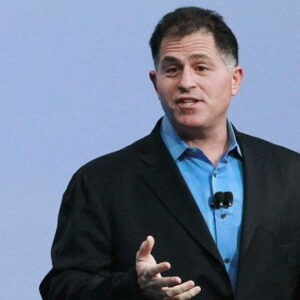 Michael Saul Dell is a business entrepreneur from the United States who created Dell Inc., a global leader in personal computer sales (PCs). He currently serves as the CEO of the company he created more than three decades ago as Dell Computer Corporation. He is one of the world’s wealthiest persons, with billions invested in other businesses. He grew up listening to his parents debate business and economic matters as the son of a stockbroker. He was a bright little lad who had an early interest in business and made a small fortune selling his stamp collection as a teenager. He worked a few part-time jobs and put his money into equities and precious metals. He obtained his first computer at the age of 15 and rapidly disassembled it to learn how it worked, thanks to his natural curiosity and enthusiasm for technology. He made $18,000 in a year selling subscriptions to the ‘Houston Post’ as a high school student. He came up with the notion of selling personal computers while in college and dropped out to follow his dream. He proved to be a very successful businessman, and Dell Inc. expanded to become one of the world’s largest personal computer dealers over the years.

Michael Dell was born to a Jewish household in Houston on February 23, 1965. Alexander Dell, his father, was an orthodontist, and Lorraine Charlotte (née Langfan), his mother, was a stockbroker.

Herod Elementary School in Houston was where he acquired his primary education. He was a brilliant little boy who learned a lot about money from his stockbroker mother and acquired a strong interest in business at a young age.
As a teenager, he enjoyed working and took on a number of odd jobs. He also sold his stamp collection for $2000, a significant amount for a young youngster. He put his money in stocks and precious metals, which he thought was unusually mature and adventurous for his age.

He was drawn to technology during his teenage years, and at the age of 15, he purchased his first computer. He took it apart to examine the components and see how it functioned.

During his time at Houston’s Memorial High School, he began selling subscriptions to the ‘Houston Post’ during the summer holidays. He noticed that making cold calls was ineffective and established a new marketing strategy that proved to be more productive. He made $18,000 in a year, which was more than some of his school instructors made in a year.

Michael Dell knew he wanted to be an entrepreneur since he was a child. His parents, on the other hand, wanted him to be a doctor, so he enrolled in the University of Texas at Austin in 1983.
He pursued his entrepreneurial goals even as a pre-med student. He established an unofficial business assembling and selling upgrade kits for personal computers out of his dorm room. His business was doing so well that he decided to drop out to devote more time to it.

In January 1984, Michael Dell registered his company as “PC’s Limited.” He changed the company’s name to Dell Computer Corporation in May 1984. His company had developed to the point that he needed a few staff to take and fill orders, as well as upgrade basic machines.

Dell placed a strong emphasis on customer satisfaction, prioritizing high-quality goods and great customer service. His convictions paid off, as the company’s revenues increased dramatically over the next few months. By 1985, the company had expanded to include the design and manufacture of computers using purchased components.
Dell released a 12-megahertz 286 CPU in 1986, making it the fastest personal computer at the time. The pricing of this product was competitive with an IBM competitor, and it was a big success. The device received rave reviews, and the company’s revenues increased to $60 million the next year.

Over the next few years, the company’s revenues rose, and by 1992, it was named among Fortune magazine’s top 500 firms. Dell was the CEO of one of the world’s most successful corporations at the time, despite the fact that he was just 27 years old.

Dell recognized the necessity for an online presence in the 1990s and created www.dell.com in 1994. In 1995, the company began offering online pricing, and by 1996, it was selling online. Soon after, internet sales topped $1 million per day, and by 2000, they had risen to $50 million per day.
Dell’s initial servers and storage devices were released in 1996 and 1998, respectively. He also established MSD Capital L.P. in 1998 to oversee his family’s investing interests, which include publicly traded stocks, private equity, and real estate.

In 2004, Michael Dell stepped down as CEO of the company, but he retained his chairmanship. In 2007, the board of directors asked him to return as CEO.

When Dell Inc. agreed to pay a $100 million penalty to settle charges of accounting fraud filed by the Securities and Exchange Commission in relation to hidden payments from Intel Corporation in 2010, he came under intense scrutiny.

Michael Dell is a shy man who prefers to keep his personal life private. Since 1989, he has been married to Susan Lynn Lieberman, with whom he has four children.

Michael Dell founded the Michael and Susan Dell Foundation in 1999 with his wife Susan. The foundation has given $65 million in grants to three health-related organizations, focusing on issues such as urban education, childhood health, and family economic stability. By 2010, the foundation has invested over $650 million on children’s issues and community projects in the United States, India, and South Africa.

Michael Dell has a net worth of $45 billion dollars.