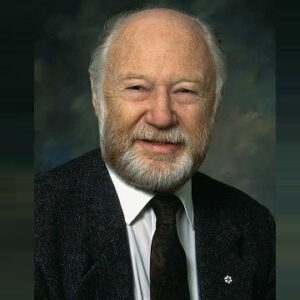 Michael Smith, a British-born Canadian biochemist, shared the Nobel Prize in Chemistry in 1993 for his work on site-directed mutagenesis. His discovery allowed scientists to insert specific mutations into genes, paving the path for research into gene therapy treatments for cystic fibrosis, sickle-cell disease, and hemophilia, among other diseases. Born from a poor household in England, he grew up to be a good student who, thanks to a scholarship, was able to continue his study beyond a certain level. He attended the famous Arnold School and developed a passion for science. Even though his family resided in a reasonably safe area, he observed the damage and loss of life caused by World War II as a young boy. Following his education, he was able to secure another scholarship and enroll in the University of Manchester’s chemistry honors program. He eventually finished his PhD under H.B. Henbes’ supervision. He subsequently relocated to Vancouver, British Columbia, to pursue postdoctoral research with Har Gobind Khorana at the British Columbia Research Council. He and his team began the groundbreaking DNA sequence study that eventually earned him the Nobel Prize in the 1970s.

Michael Smith was born in Blackpool, England, on April 26, 1932, to Mary Agnes Smith and Rowland Smith. His parents were both hardworking folks from low beginnings.

Marton Moss Church of England School was where he received his early education. He took the “Elevenplus” examination, which was utilized in English schools at the time, in 1943. Students who passed the exam were given the opportunity to obtain an academic scholarship. Smith’s sole choice for further education was to come from a low-income family.

He passed the exam and was offered a scholarship to the famous Arnold School. This is where he discovered his passion for chemistry. He also joined the Boy Scouts while in school. Even though his own family stayed in a reasonably safe location, he observed the horrors of World War II wreaking havoc in England as a young boy.

He wanted to go to Oxford or Cambridge, but his Latin skills prevented him from doing so. With the help of a Blackpool Education Committee Scholarship, he was able to gain admission to the University of Manchester’s chemistry honors program in 1950. He received his diploma in 1953.

He completed his Ph.D. degree in 1956 under the guidance of the eminent organic chemist H.B. Henbest, thanks to another State Scholarship. His thesis was titled ‘Studies in the stereochemistry of diols and their derivatives,’ and it concentrated on cyclohexane diols.

He got a post-doctoral position at the British Columbia Research Council in Vancouver, Canada, after earning his doctorate. He worked there under the direction of Har Gobind Khorana, who was pioneering new nucleotide synthesizing processes.

By that time, DNA had been recognized as a cell’s genetic material, and Khorana and his colleagues were looking into how DNA encoded the proteins that made up an organism. Smith’s first objective was to create a generic, efficient method for chemically synthesizing nucleoside-5′ triphosphates based on Khorana’s ATP synthesis.

Khorana and Smith both transferred to the University of Wisconsin–Institute Madison for Enzyme Research in 1960. Smith worked on ribo-oligonucleotide synthesis here. Although the laboratory had superb facilities, he was unhappy and sought employment elsewhere.

During this time, he focused primarily on the synthesis of oligonucleotides and the study of their characteristics. Smith was able to perform important research on genes and genomes, as well as ways of sequencing huge DNA molecules, while on sabbatical at the University of Cambridge in England with Fred Sanger. This helped him establish himself as one of the world’s premier molecular biologists.

Smith’s molecular biology study in the 1970s was solely focused on how genes inside the DNA molecule operate as biological information stores and transmitters. Smith and Clyde A. Hutchison III created a novel technique called “oligonucleotide-directed site-directed mutagenesis” in 1978. They also devised a method for inserting site-specific mutations into genes using synthetic DNA.

He founded the Faculty of Medicine’s Centre for Molecular Genetics in 1982 and became its director in 1986.
He was the director of the UBC Biotechnology Laboratory from 1987 until 1995.

Peter Wall Distinguished Professor of Biotechnology was bestowed to him in 1996. He then became the founding director of the BC Cancer Research Centre’s Genome Sequencing Centre (now known as the Genome Sciences Centre).

Michael Smith is most known for his work on site-directed mutagenesis, a molecular biology technique for making precise and purposeful alterations to the DNA sequence of a gene and its products. His method may be used to change nucleotide sequences at specific, desirable regions inside a gene, which has led to newer, more practical uses in medicine, agriculture, and industry.

“For his important contributions to the establishment of oligonucleotide-based, site-directed mutagenesis and its development for protein investigations,” Michael Smith received half of the Nobel Prize in Chemistry in 1993. Kary B. Mullis received the other half “for his discovery of the polymerase chain reaction (PCR) method.”
He received the Royal Bank Award in 1999.

He gave half of the Nobel Prize money to researchers studying the genetics of schizophrenia, and the other half to BC Science World and the Society for Canadian Women in Science and Technology. He was known for his philanthropy.
He gave the prize money from the Royal Bank Award to the BC Cancer Foundation.

In 1960, he married Helen Wood Christie. The couple had three children before splitting up in 1983. He later got into a love connection with Elizabeth Raines.
Michael Smith died at the age of 68 on October 4, 2000.