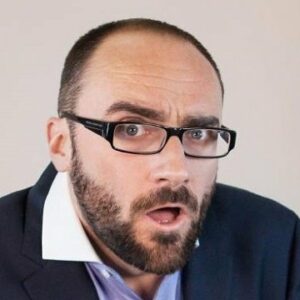 American speaker, educator, comedian, editor, and internet celebrity Michael Stevens is well-known. His well-liked educational channel, Vsauce, which features engaging videos about interesting concepts and theories, is well-known for providing the answers to many puzzling queries.
Stevens is well-known among the general public for his TED lectures and videos, which are among the most popular videos on the internet. Michael Stevens, one of the digital world’s geniuses, is a fan of all things fascinating, including the arts, science, philosophy, language, and history. Along with Adam Savage, a TV celebrity, actor, and educator, he co-hosted the Brain Candy Live educational stage tour in 2017. The tour thrilled the audience with innovative demonstrations and other interactive techniques to address a number of intriguing subjects. Michael Stevens has also won a number of honors, including Webby Awards and Streamy Awards for “Education” and “Editing.”

In 2007, Michael Stevens began working as a YouTube video editor. His popular YouTube films attracted the attention of Ben Relles, YouTube’s head of comedy. Soon after, he received an invitation to join the internet comedy troupe “Barely Political,” where he had the opportunity to perform alongside renowned comics like Todd Womack, Mark Douglas, Amber Lee Ettinger, and Andrea Feczko. Stevens started his own YouTube channel, Vsauce, in 2010, which featured a lot of video game-related content. Before becoming well-known for his educational series, DOT, which also became the center of his YouTube channel, Vsauce, he continued to release game-related videos. His instructional films include talks on scientific theories, concepts, and ideas. Stevens has also received numerous honors for Vsauce, including the “People’s Voice for News & Information” and “People’s Voice for Science & Education.”

He collaborated with YouTube Red to develop and host the program “Mind Field,” which explores many facets of human behavior. Along with TV celebrity Adam Savage, he has also been to forty locations in the United States to perform their science-based stage production, “Brain Candy Live.” The event was a huge hit with the general public since it amused and engaged the audience with exciting demos and interactive sessions.

Why Michael Stevens Is Unique?

Michael Stevens stands out from other YouTubers due to the subjects he chooses for his Vsauce videos. In contrast to the majority of YouTube channels, Vsause discusses complex scientific theories and real-world concepts that provide answers to a number of intriguing problems for laypeople. What if the Earth ceased to spin? What is the resolution of the eye, and How much money is there in the world are just a few of Stevens’ original videos.

On January 23, 1986, Michael Stevens was born in Kansas. His mother was a teaching assistant, while his father was a chemical engineer. He was quite humorous from a very young age. Oddly, his father used to refer to him as a polymath, someone who was knowledgeable in many different subjects. After getting married to Marnie in 2016, Stevens relocated back to the United States from London. He is presently a resident of Los Angeles. Michael Stevens holds bachelor’s degrees in both English literature and neuropsychology. In comparison to other educational websites, he considers Wikipedia to be one of the most trustworthy online sources of real information.

The estimated net worth of Michael Stevens is about $1 million.