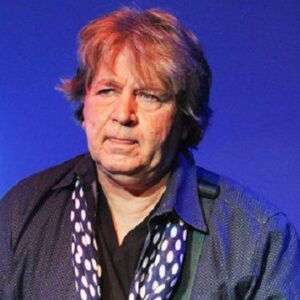 Mick Taylor is a stage name for Michael Kevin Taylor, a British musician, singer, songwriter, and guitarist. From 1969 to 1974, he was a member of the legendary and timeless English rock band the ‘Rolling Stones’, contributing to some of the band’s most memorable classic albums, including ‘Let It Bleed’, ‘Get Yer Ya-Out!’, Ya’s ‘Sticky Fingers’, ‘Exile on Main St.’, and ‘It’s Only Rock ‘N’ Roll’. He returned to the band’s stage performances in 2012, including the ‘Reunion shows,’ the ’50 & Counting’ concert tour, and the ’14 On Fire’ concerts. Prior to joining the ‘Rolling Stones,’ he spent 1966–1969 as a member of another English blues rock band, ‘John Mayall & the Bluesbreakers.’ Among the band’s notable albums are ‘Back To The Roots,’ ‘Crusade,’ ‘Blues From Laurel Canyon,’ and ‘Bare Wires.’ Following his tenure with the ‘Rolling Stones,’ he released numerous solo albums in collaboration with other artists. These include collaborations with Bob Dylan on ‘Infidels’, ‘Empire Burlesque’, and ‘Real Live’; Carla Olson on ‘Too Hot For Snakes’, ‘Within An Ace’, and ‘The Ring Of Truth’; and John Phillips on ‘Pay Pack & Follow’. He was inducted into the ‘Rock and Roll Hall of Fame’ in 1989, alongside the ‘Rolling Stones. In 2011,

He was born in Welwyn Garden City, England on January 17, 1949, into a working-class English family. His father worked as a fitter for the ‘De Havilland’ aircraft company. He was raised in Hatfield, Hertfordshire.

Taylor began playing guitar at the age of nine. He acquired this knowledge from his maternal uncle. As a child, he accompanied his parents to see ‘Bill Haley & the Comets’ and was captivated by the band’s performance, which instilled in him an interest in joining a rock band.

In his teens, he formed various bands with his classmates and performed at various concerts. One such band was ‘The Juniors and the Strangers,’ a portion of which was later incorporated into the new band ‘The Gods.’

In 1965, he and his classmates attended a show at Welwyn Garden City’s ‘The Hop’ Community Centre featuring English blues rock band ‘John Mayall’s Bluesbreakers’. Taylor approached John Mayall and informed him that he knew some of the band’s songs and could play with them for the remainder of the night’s show if the latter permitted.

John Mayall allowed the young Taylor, who was still in his teens at the time, to play the band’s second set, and the teenager’s performance made an impression on Mayall. This incident was instrumental in the development of Taylor’s musical career.

While Mayall was looking for a guitarist to fill the vacancy left by Peter Green’s departure to form ‘Fleetwood Mac’ in 1966, he invited Taylor to fill the position.

Taylor then made his debut with the ‘John Mayall’s Bluesbreakers’ at an old blues club called ‘Manor House’ in north London, where music fans were eager to see how the newcomer would fit into Eric Clapton’s shoes.

Taylor toured with ‘John Mayall’s Bluesbreakers’ for the next three years, appearing on the band’s seminal 1967 album ‘Crusade’ and 1968 albums ‘Bare Wires’ and ‘Blues from Laurel Canyon’. He gradually developed a blues-influenced guitar style infused with Latin and jazz influences.

In 1969, following the departure of Brian Jones from the band in June of that year, John Mayall recommended Taylor’s name to Mick Jagger, the lead vocalist of the ‘Rolling Stones.’

He quickly gained the attention of Mick Jagger and Keith Richards of the ‘Rolling Stones,’ and thus began Taylor’s new musical journey. On July 5, 1969, at a free concert in London’s ‘Hyde Park,’ he made his band debut.

In the absence of Richards, Jagger and Taylor completed two tracks on ‘Sticky Fingers,’ namely ‘Moonlight Mile’ and ‘Sway.’ Taylor received credit only for co-writing ‘Ventilator Blues,’ one of the album’s tracks, while Richards and Jagger received the lion’s share of the credit.

He struggled to get along with Richards after resuming work. Additionally, Richards deleted tapes containing Taylor’s guitar parts for several of the album’s songs.

In December 1974, he left the group. He stated in one of his interviews with Gary James that, while he was slightly miffed about not being given credit for a couple of songs, this was not the sole reason he left the band.

He joined the newly formed Jack Bruce Band and toured Europe following his departure from the ‘Rolling Stones’. It was, however, short-lived, disbanding in 1976.

On December 14, 1981, he appeared in one of the ‘Rolling Stones’ concerts at Kansas City’s Kemper Arena. He has collaborated with a wide variety of artists over the years, including Bob Dylan and Carla Olson, and toured the world with a variety of musicians and bands.

Taylor performed ‘Midnight Rambler’ from the album ‘Let It Bleed’ during the ‘Rolling Stones’ two London shows held on November 25 and 29, 2012.

Between November 25, 2012 and July 13, 2013, he performed and toured throughout Europe and North America as part of the ‘Rolling Stones’ ’50 & Counting’ concert tour, which celebrated the band’s 50th anniversary.

Between February 21 and November 22, 2014, he performed for the ‘Rolling Stones’ and toured Europe, Australia, New Zealand, and Asia with them as part of their ’14 On Fire’ tour.

Rose Millar, whom he married in 1975, is a British actress. On January 6, 1971, he and Rose welcomed their daughter Chloe. Later in life, the couple separated.

His second marriage, to Valerie, lasted only a few months. Emma, his second daughter, was born during a brief relationship with an American woman who had previously worked with his band as a backing vocalist. ‘Rolling Stone’ magazine ranked him 37th on its list of the 100 greatest guitarists of all time.

Mick Taylor net worth: Mick Taylor is a musician from England who has a net worth of $300,000. Mick Taylor was born in Welwyn Garden City, England, and grew up in Hatfield, Hertfordshire, England, where he began playing guitar in elementary school.

He began playing in various bands while still in high school, and one night while out with friends, he offered to fill in for Eric Clapton when the legendary guitarist failed to show up for a gig with The Bluesbreakers.