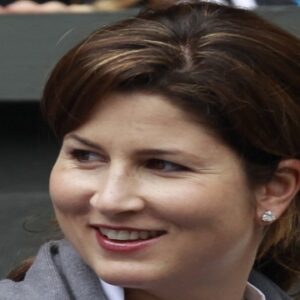 Miroslava Mirka Federer is a former Swiss tennis player and the wife of Roger Federer, the world’s number one tennis player. She used to be one of the most promising female tennis players from Switzerland in her peak, and she stunned tennis fans all over the world in a short period of time. In September 2001, she achieved the pinnacle of her career when she was ranked no. 76 in the world WTA rankings. Aside from her singles rating, her doubles ranking peaked at 215th in 1998, when she was just starting out as a professional tennis player. Mirka originally met Roger at the 2000 Olympics, and the two began dating while bonding over their shared love of tennis. Her passion for tennis dates back to her childhood. Martina Navratilova, the ace tennis player, recognized Mirka’s brilliance when she was just eight years old, and her admiration from an international celebrity like her helped her grow into one of the classiest Swiss ladies tennis stars. Her chronic foot problem, however, prevented her from consistently performing to the best of her abilities, and she only made it to the third round of the US Open in 2001. She retired from tennis a few years later, but her close ties to the sport remain, and she can be seen on the court at all of her husband Roger Federer’s matches. She also serves as his public relations manager and oversees his money and public relations.

Childhood and Adolescence of Mirka Federer

Miroslava Mirka was born in Bojnice, Czechoslovakia, on April 1, 1978, to parents who worked in the jewelry industry. Her family left their home nation after her birth and relocated to Switzerland in search of a better future. Mirka has stated that her very basic upbringing as a child played a big influence in moulding her up as someone who appreciates the value of money and fame.

She saw a tennis match when she was very little and the sport just clicked with her. As if it were a sign from the cosmos, she met Martina Navratilova when she was eight years old. She was enamored with Martina’s demeanor and determined that she wanted to be just like her, so she spent her childhood honing her tennis talents. Martina gave her a tennis racket before she met her husband, which she has described as the finest gift she has ever received.
She practiced for hours on the tennis court, constantly fueling her desire to play for her country one day, and despite all the challenges she faced, ranging from financial difficulties to emotional turmoil, she was given the opportunity to represent her country in the professional tennis arena in the late 1990s.

Mirka demonstrated her enormous sporting skill by winning the Swiss Junior Title, in which she competed against the best young and emerging players in Switzerland. She had tremendous support from professional tennis players, and she began her professional tennis career in her late teens/early twenties as a result of world-class training and coaching.

Mirka didn’t have a long or very successful career, but that didn’t stop her from amassing a sizable fan base. She began her tennis career in the early to mid-1990s, competing in tournaments all over the world, winning the Tel Aviv tennis championship in 1997 and the Clearwater Tennis Open in 1998, and eventually being picked for the Israeli Olympic team in 2000.

She met Roger Federer, who had just began his professional tennis career, at the 2000 Summer Olympics. They hit it off right away and began dating while pursuing their own careers.
Mirka was at the pinnacle of her career by the third quarter of 2001, when she reached the third round of the US Open, one of the most prestigious tennis tournaments in the world. For the first time since she began playing, her rankings climbed into the top 100. Despite the fact that she was knocked out of the tournament in the third round, her sense of style was well received by the audience, and she was greeted with applause and worldwide recognition.
When they played mixed doubles in the Hopman Cup tennis tournament in 2002, she joined up with Roger Federer. It was one of her final bouts, when she finally spoke out to the media about her injuries, which forced her to withdraw from the sport early. She began managing Federer’s funds, endorsements, and public relations when they married.

After the two initially locked eyes in the 2000 Summer Olympics, Mirka Federer dated Roger Federer for a decade. Their love was the buzz of the town, and they eventually married in 2009 at the Wenkenhof estate in Reiher, in a ceremony attended only by close friends and family.
Mirka’s passion for the sport hasn’t waned since she said her final goodbyes to it, and she now attends nearly all of her husband’s games.

The couple welcomed identical twin girls, Myla Rose and Charlene Riva, into the world the same year they married.
In 2014, the couple had their second set of twins, this time boys, who they named Leo and Lennart.

Despite having four young children and a household to care for, Mirka refuses to let her husband go alone and is a continual source of support for him. Federer is one of the best tennis players of the modern era, and he claims that if it weren’t for his wife, he would have been exhausted from continual pressure to do better. Controversies

Mirka has been a staunch supporter of her husband Roger, and her enthusiasm can get a little out of hand at times. In the third set of an ATP tour semi-final match, she was accused of heckling her husband’s Swiss opponent Stan Wawrinka. Her disrespectful behavior drew a lot of criticism. She allegedly referred to him as a “cry baby.” Stan had also protested to the referees about her in the first few sets, it came out. The disagreement came a head when Roger was forced to intervene, and it apparently escalated into a full-fledged brawl between two Swiss tennis legends.

Estimated Net Worth of Mirka Federer

Mirka Federer is one of the wealthiest tennis players and one of the most popular. Mirka Federer’s net worth is estimated to be $1.5 million, according to Wikipedia, Forbes, and Business Insider.